Shift from town to country rewarding 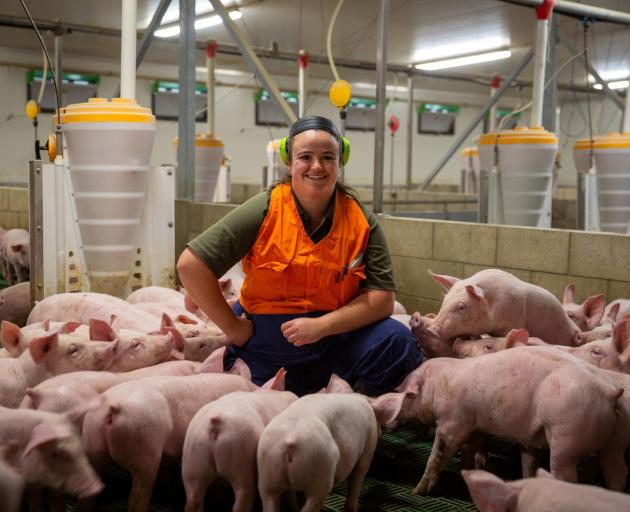 Nicky Tily is junior stockperson on a pig farm near Sheffield. PHOTO: SUPPLIED
Nicky Tily works with up to 4000 pigs — and loves every minute of it.

Ms Tily (23), who grew up in urban Christchurch and worked in the food service sector, is now a junior stockperson.

"Pigs are so intelligent. I enjoy everything about the job."

She had always liked the idea of working with animals or on a farm and considered a career in vet nursing. However, having completed a six-month course, gaining a National Certificate in Animal Husbandry, she decided against vet nursing.

Her first job in the farming sector was with Mapua stud at Southbridge, which included a sheep stud, dairy grazing, cropping and a 120 sow outdoor piggery. She enjoyed all of the work, but particularly working with the pigs.

In July, she moved to Offaly Farms at Annat, near Sheffield, working for farmer Sean Molloy as the farm was closer to home in Coalgate where she now lived with her partner.

The indoor piggery is home to 400 breeding sows. At any one time, there are 4000 pigs on site including piglets, weaners, growers and sows.

"All my learning in farming has been on the job, although I’m now thinking about doing some Primary ITO qualifications around pigs," Nicky said.

"It’s been a steep learning curve, but I have really enjoyed it. I’ve learnt about health and safety, driving the vehicles, how to do artificial insemination, use the feed mill, give pigs vaccines and carry out health checks."

"There is a lot of automation at Offaly Farms. Rather than adding all the components of the recipe manually into the mixer, I’ll make a small bucket of minerals first, than the grains, oils and other necessary things are added automatically into the mixer.

"The sows feed in the ESF [electronic sow feeder] and there are seven feeding stations. The sows are all ear tagged with an electronic ID tag. The tag tells the feeder who the sow is, how much to feed her and relays all the information back to us about her on the computer. A big focus for me is the health of the pigs."

A big part of her enjoyment of the role was the personalities of pigs and being part of ensuring they were happy and well cared for.

"Most people never get to talk to a pig farmer because there aren’t that many of them and they are off the beaten track.

"But you should see how happy and chilled the pigs are in their big temperature-controlled rooms. A lot of the time they are just lying around relaxing. Sometimes I’ll go in to check if one hasn’t been to feed and it’s because she is so relaxed. They don’t mind a belly rub or a scratch now and then. I love playing with the piglets too."

She also enjoyed the environmental aspects of working on the farm.

"We have an amazing covered effluent pond and all the effluent is used elsewhere on the farm — we spread it on the paddocks.

"We have about five sheep on farm, four ewes and Malcolm the wether, as well as some beef cattle.

"Sean’s father, Peter Molloy, used to be a racehorse trainer and he owns some racehorses, so sometimes I get to work with those too."

Getting involved with Young Farmers helped her to make the move from city work to a rural career.

"I didn’t want to keep working in the city, so I looked for jobs I could apply for in farming. I’d definitely like to stay working with pigs. It would be good to move into management eventually."