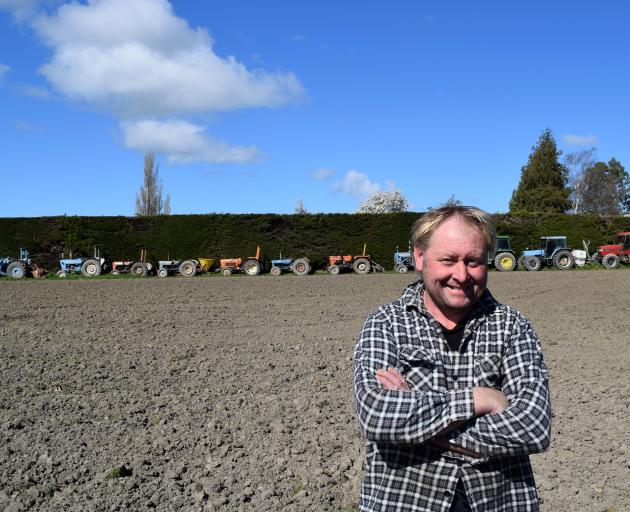 Armstrong and Co manager Grant Robb shares a paddock with a fleet of vintage tractors. PHOTO: SHAWN MCAVINUE
In an occasional series, Shawn McAvinue travels highways in Otago and Southland and when something catches his eye, he stops and talks to the person responsible for that something. For the first instalment he stops on State Highway 1 to visit a market garden in North Otago.

A fleet of vintage tractors lining a hedge on a market garden bordering State Highway 1 in North Otago attracts plenty of attention.

Peter Armstrong, the owner of the fleet, said tourists from across the world often wanted a closer look at the tractors lining a hedge on his 86ha farm between Totara and Maheno.

He had grown crops on the farm for more than 40 years, mostly Jersey benne potatoes, cabbage, cauliflower and broccoli.

He owned about 30 tractors — more than could be stored in his sheds.

New tractors got priority in the shed and the older ones were left outside.

A severe frost could freeze fluid in an engine and crack its cylinder block.

The northern side of a mature hedge provided frost protection, so he parked about a dozen tractors there in winter.

"They’re all ancient. All of our gear is out of Noah’s Ark."

A sure sign it was winter in North Otago was when the tractors lined the hedge.

"When it warms up, they disappear."

When he first created the line up, he soon realised it was a feature of the landscape from the state highway.

Soon after, people began asking him why he was "showing off" his tractors.

He quickly put them right, denying he was bragging because the tractors on display were his most derelict.

He had a habit of buying old tractors.

"If they are on skinny tyres and they can get through the rows of veges — we just love them."

He had a reputation of buying many tractors so he could avoid having to change implements.

When asked if there was any truth in the reputation, he replied: "Oh hell, yeah — it’s 100% true — we’ve got more tractors than implements."

Farming near a highway had challenges.

"You’ve got to keep your rows straight — if you don’t everyone gives you hell."

He recalled being a child on a school bus travelling past his family’s farm and other children teasing him about his father not being able to drive a tractor straight because of what they saw in the paddock.

"If your rows are straight by the road, no-one says anything but if they’re not straight everyone lets you know."

Farm manager Grant Robb (46) started working on the farm when he was 9.

After leaving to work elsewhere locally, including as a mechanic in Alma for about 20 years, he was back working on the farm.

He struggled to pick his favourite tractor.

"They are all good."