Trust at heart of realtor's business 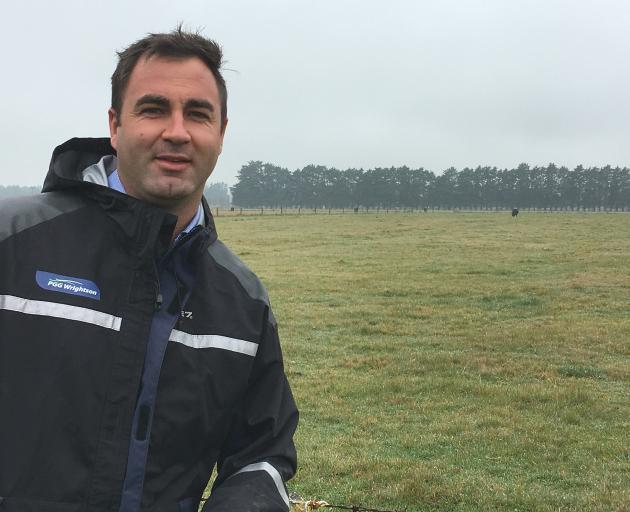 ''I always keep that in the front of my mind when I am dealing with anyone,'' he says.

Tim (32) grew up in Taupo with his parents, Brendan and the late Alice Gallagher, nee Hayman (daughter of Frank Hayman, who managed Inverary Station), and his three siblings, Erin, Phillip and Tim's twin sister Charlotte.

His parents had met on Inverary Station, up the Ashburton Gorge, when Brendan was a shepherd, and Alice a nursing student. In a semi-mirrored existence Brendan was also a stock agent, although in the North Island, before farming (sheep and beef) and is now in residential/rural property sales, in Taupo.

As a youth Tim spent a lot of time in Mid Canterbury helping out with his Aunt Sarah and Uncle Mike Morrow, when they farmed at Lowcliffe, near the coast.

The Morrows' arable farm, and the work done by his uncle, piqued his interest in farming from an early age. He learned every aspect of arable farming from harvesting to cultivation and post-harvest work.

''He was a perfectionist, not just a turn-the-steering-wheel, plant-a-seed and hope-for-the-best type farmer ... he was such a technically capable farmer.''

And the invaluable experience allowed Tim to put it into practice while still studying for a BCom degree in commercial law and business management at Victoria University, in Wellington.

He used to fly in and out of Christchurch, and drive down to the Lowcliffe farm during the week, to help out wherever he could.

It's an interest he still has today. He rents on a rural property, but is planning to progress to owning his own farm.

''If I won Lotto, I would still do what I do, but I'd buy a farm in Canterbury and drive a tractor after work,'' he said.

Tim's first job at PGG Wrightson came up while he was home on winter break from his OE, where he was the harvest manager on a large arable operation in northern Germany.

It was one of the various farming and agricultural contracting roles he picked up in his time working in Canada, the United States and Germany. His one-year OE turned into a five-and-a-half-year jaunt.

Tim says even then, he could understand the German language, but didn't speak it.

''When we graduated, all my friends at university took jobs and focused on career progression ... I never wanted to rush. I wanted my career to fall into place naturally, and looking at it now, that is how it has happened,'' he says.

Back from Germany to spend time with family in 2014, Tim was rabbit-shooting in the South Island with some mates when he spotted a PGG Wrightson advertisement for a junior livestock agent.

Still intending to return to Europe, he applied for the role on impulse and was offered a position.

Working with farmers between the Rakaia and Rangitata rivers, he rapidly grew his client book.

But with his livestock business gaining traction, Tim's career then went in another unplanned direction after a suggestion from a colleague.

''Fordy [Robin Ford] is one of the most successful and experienced rural real estate salespeople in the country, working for PGG Wrightson. We were working for the same company and dealing with the same clients, so we came to know and respect each other. One day he said to me 'I can see in you what made me successful. You should do your real estate exams'.''

Although Tim may have left the livestock role, he still keeps up to date with the markets and is often contacted for advice by some of his larger clients, who still value his honest opinion.

''I keep an eye on the livestock market and am able to offer my two cents,'' he says.

''When [Fordy and I] submit together on properties, we emphasise that we offer a mix of new and old, the wise head of the veteran, with the young fresh legs and heart of the rookie. My legal background, which makes me comfortable around environmental legislation, compliance and regulation, alongside Fordy's many years' experience, priceless knowledge, and networks,'' Tim says.

The chemistry has worked well and Tim has played a key role in 13 rural property sales during the past 12 months..

''You develop a more deeper and personal relationship in real estate,'' he says.

''People are selling their largest asset, there is a lot of emotion involved, and [unlike livestock sales] there is often a wife and wider family involved, who are a large part of the decision making.

''They are the salt-of-the-earth people, so refreshingly honest that you get what you see.''

It can take a bit of time from the decision to sell, to putting the property on the market.

It's a process, ''to get them emotionally ready'', especially if it's a generational farm going on the market.

''A lot of time, sweat and heart has gone into the place,'' Tim says.

But most of those sales are succession planning - selling the home farm, or blocks off the back of farms, to give set-up money to children wanting to buy their own farms.

Tim estimates around 70% of the farm sales are part of succession planning, with the farm not big enough for two children to take over, but a part, or whole sale, can be used to help them on their way to a new property.

He says the banks are still lending money, just not ''throwing it about like lollies'' to stop people getting too deep in debt.

Even Mycoplasma bovis has not stopped farms in the district from changing hands.

''M. bovis does not mean you cannot sell your farm and no-one wants to buy, you just have to work through the process. It pays to be upfront and proactive rather than shut the door,'' he says.