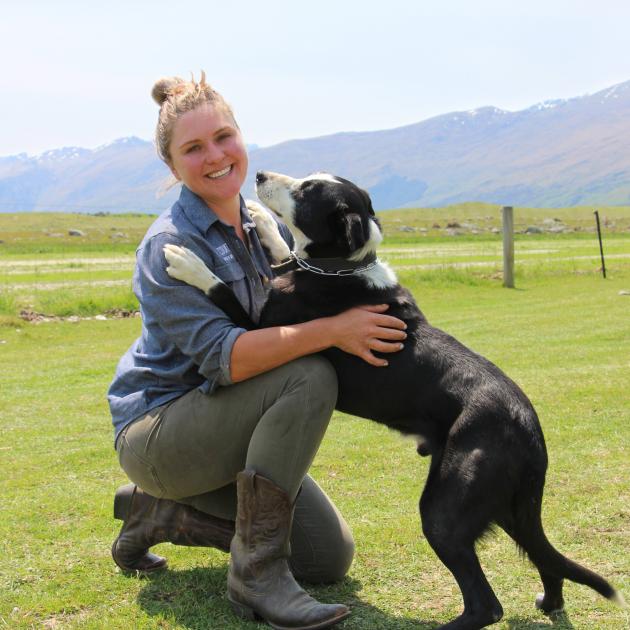 Fairlight Foundation executive director Laura Douglas and her dog, Lad, prepare for the opening of a women's farm training school at Fairlight Station, near Garston. PHOTO: SUPPLIED
A farm training institute with a difference is opening its gates in Northern Southland next year. Business and rural editor Sally Rae finds out more.

When Covid-19 claimed the clientele of her agri-tourism venture near Kingston, Laura Douglas spent a couple of days crying inconsolably.

Still on a high from taking her farm animals to Wanaka A&P Show for a display, she received a phone call from international bus company Contiki two days later, cancelling its visits.

Those tours came through Real Country every month - every week in summer - and represented about 65% of her revenue. Corporate groups also cancelled as the country went into lockdown.

"It took me about a week for it all to really sink in that everything was pretty much down the gurgler and there was nothing I could do about it," she recalled.

But after a few very low days, the gutsy young businesswoman and rural advocate tackled the future in her trademark enthusiastic style. "I probably had a week ... just crying and being a mess, and then I just pulled my socks up and ripped into it."

And the upshot of that sock-pulling up exercise - thanks also to the passion of some other farming folk - has been the establishment of the Fairlight Foundation, a female-only farm training institute based at Fairlight Station, in Northern Southland.

Miss Douglas (33), who is being filmed next week for an upcoming episode of Country Calendar, laughs that she "doesn’t know how the universe came together" but things fell into place and the 12-month programme will have its first intake of three women next year.

Having grown up on a sheep and deer farm at Mossburn, she never initially considered agriculture as a career. This year, she did a two-week road trip speaking at secondary schools throughout Southland, organised through Great South.

She spoke about her own life and encouraged pupils to "really dig deep" about what their passion was at secondary school, something that she never did.

Instead, she studied science at university and pursued a corporate career, most latterly working for a global software company that developed cyber-analytical tools.

While living a life that "ticked a lot of boxes", she acknowledged at 29 that she was not happy and traded that career to establish Real Country in late 2016.

Last year, she launched Southern Girl Finishing School, hosting day-long workshops for girls, which were aimed at building their confidence by teaching them a series of practical skills.

In October last year, she employed Holly Wright, whose parents, Simon and Lou, own Fairlight Station, a 2500ha property near Garston, with Doug and Mari Harpur.

Describing her as a "mini-me" - "we’re so similar, everyone freaks out" - everything was going "amazing" with the business until the arrival of Covid-19.

During one of her low days, Miss Douglas was driving to the farm to feed her animals when she phoned her father John. She was crying so much that she could hardly talk.

Mr Douglas, one of the founding members of the Ag Proud rural movement, had some sage advice for her. He told her she needed to remember it would be a "blip" on her balance sheet when she looked back in a decade’s time.

He had been farming for 45 years and had seen much worse seasons and years; he encouraged her to think long-term and reminded her that she had not lost her business, just her customers and income.

Still faced with bills to pay, Miss Douglas applied for a vet technician’s job at VetSouth and spent two months - sometimes with 2.30am starts to drive to Winton - teat sealing heifers and dairy cows on farm. While exhausted at the end of every day, it was working with a great group and it gave her "breathing time".

Still thinking the borders would be open by spring, possibly even by the ski season, she started shifting break fences at Lorne Peak Station for a couple of hours a day.

Then it started to dawn on her that the borders might not open this year and she had to "make some pretty hard calls", one of which was redefining what she was doing with the business.

She started looking at her one-day farm skills workshops and whether she could tie some education credits to them. During her research, it became very apparent that on-farming training institutes were very male-dominated.

Simon Wright phoned and asked what she was doing and so she told him that she wanted to get into farm education for females. He suggested they talk.

Mr Harpur and Mr Wright had been speaking for a long time about setting up a farm institute, although not necessarily specifically for women, as they had struggled in the past to get high quality staff.

So a brainstorming session was held over a couple of days, where the Harpurs, Wrights and Miss Douglas’ combined their passion and skills to come up with up the female-only training institute. "It’s the most incredible thing we are taking on," she enthused.

The foundation’s trustees were Mr Wright, Mr Harpur and Peter Wilson, who was chairman, and there was a "100-year vision" for the initiative.

Starting small, the intention was to take on three women in January who would "live and breathe" farming life for 12 months; they would be hands-on during busy times such as lambing, calving, tailing, weaning and shearing, and learning on the job.

During quieter times, they would learn other skills like fencing, tractor maintenance and water systems - "everything they could possibly need from a practical sense" - and obtain relevant agricultural qualifications through the Fairlight Foundation’s training partners.

Miss Douglas, the foundation’s executive director, said the programme was not aimed at school-leavers; they wanted women who had "a few years of life under their belt".

There was a health and wellness component and also a values system they needed to adhere to. The aim of the foundation was to create mentors and role models in the rural industry who could then go out and influence and positively inspire other women.

The foundation’s values were be community minded, well, professional and proficient. The women had to be an active and contributing member to the local community, whether that was the local dog trial club or volunteering at the school’s pet day.

It was often difficult for women to get a leg-up in the industry; while it was easier to get into the dairy industry, it was "near impossible" to get into sheep, beef and deer industry if you did not have practical skills and a team of dogs.

The Fairlight Foundation was creating an opportunity for women to get into farming, regardless of their experience level. Mr and Mrs Harpur were initially funding the programme and accommodation, expenses and course fees would be covered and a small training wage paid.

A short-list of applicants would be brought to the station for a two-day practical course before a selection panel chose the three successful candidates. Numbers would grow as the programme developed, but they wanted to start small and make sure they had the curriculum right.

Miss Douglas reckoned she was living the perfect life - in the homestead office or on the farm building skills.

"It’s just the most beautiful thing. I’m sitting in my truck now looking out at the hills. My dogs - my boys - are tied up on the fence beside me. I get to have the most amazing stimulation of running a foundation, which is a new experience for me, and reporting to a board.

"It’s like a dream, it’s like I need to be pinched. I’m working on farm, I’m getting more people into farming ... and the philosophy of the foundation is so spinning my wheels," she said.

When it came to Real Country, she would deal with that when the borders reopened. It was likely she would get an operations manager for that business.

"Running Real Country was just the best thing I could have ever done for myself. It took Covid for me to realise although I love delighting visitors with my on-farm exploits, I get a lot more out of teaching and building confidence in people."