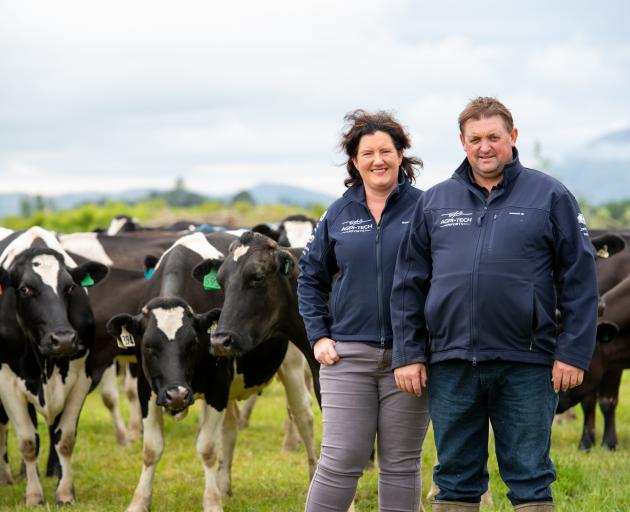 The fruitless search motivated them to research, develop and manufacture their own flooring solution of heavy duty interlocking rubber mats.

They run their mat company Agri-Tech Imports alongside their 580-cow herd operation.

Mrs Henton, a registered veterinarian, said they had run the farm for 15 years after entering an equity partnership with her parents to buy the property.

The Pomahaka River lies two farms over and the Heriot Burn waterway runs through the middle of their farm.

A reason for building the wintering shed was because the farm was prone to flooding and got snow most winters.

During the harshest winter weather, the herd could be kept on the pad all the time, Mrs Henton said.

That is why they started looking for compressible flooring.

“We wanted a product on the floor with a decent amount of cushioning, and there was nothing on the market here.”

The mats were made in a mould rather than being cut and a compression layer on their base made them soft and comfortable, Mrs Henton said.

“It gives the cows good confidence to walk around the pad and they don’t slip or fall. We knew it was a success when they started lying down and standing up just as they normally would in the paddock.”

The mats had put an end to lameness in their herd, she said.

The extra comfort for their cows equated to increased milk and increased profits, she said.

Their herd produced about 550kg of milksolids per cow, supplying Mataura Valley Milk.

Cows can access a feed pad after a gate automatically opens at 3am and the cows come in under their own steam for morning milking.

After milking, the herd returns to paddocks until the gates are automatically unlocked again about lunchtime and the herd can access the feed pad again.

While the mats were designed for their own use, other farmers became interested in them and mats were now being manufactured to order. The animals using the mats included cows, horses, pigs and deer.