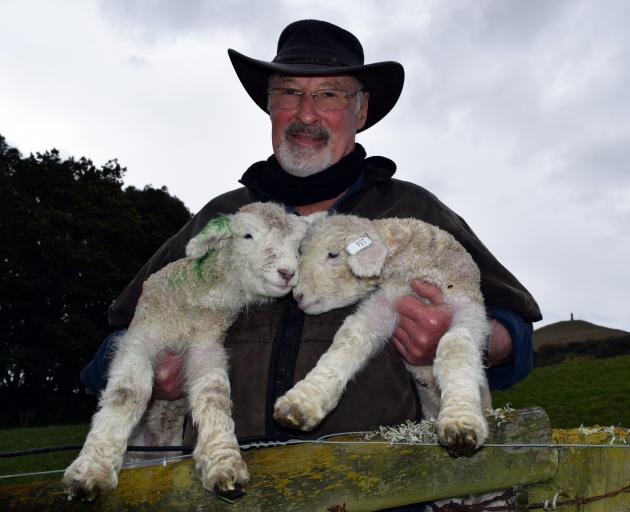 Aurora Romney stud master David Robertson checks his Romney lambs on his farm in Palmerston. PHOTO: SHAWN MCAVINUE
Selecting a ram from figures in a database is a ‘‘bone of contention’’ for some older farmers, an East Otago stud breeder says.

But being able to access some of the best genetics in the North Island has him ‘‘embracing’’ the selection method.

When his son Dave — a vet in Oamaru — suggested he buy some straws of semen from two North Island Romney rams, he acted on the advice.

‘‘Dave is an extremely intelligent man.’’

The straws were used to artificially inseminate some of the ewes on his 40ha farm, which lies south of the Sir John McKenzie Memorial on Puketapu Hill in Palmerston.

The work was completed by his family — Dave, daughter-in-law Abby and grandsons Hamish (14) and Elliot (12) and his daughter Carolyn — during lockdown last year.

‘‘It was quite an undertaking.’’

Half of the straws were from a ram with one of the highest maternal worth on the Sheep Improvement Ltd database.

Some considered the Central Hawke’s Bay ram to be a ‘‘freak’’ because of its ‘‘absolutely incredible’’ maternal worth figure.

He also bought straws of Auckland ram Kikitangeo 197/17, due to its resistance to parasites, pneumonia and facial eczema.

He admitted selecting a ram from figures in a database was a ‘‘bone of contention’’ for farmers of his age ‘‘but I’ve really embraced it’’.

‘‘I’ve found the figures backed up my eyesight.’’

Farmers could not solely rely on the figures because a sheep had to be structurally sound, so the sheep needed to be seen, even if it was in a photograph, he said.

David had been farming all his life and tried many different sheep breeds but kept coming back to the Romney breed because of its reliability.

Romneys were ‘‘versatile’’ and suited a range of conditions and country types.

The breed once had a bad name for lambing problems but the issues had been ‘‘eliminated’’ and a ewe could easily care for twin lambs by herself, meaning no orphans for a farmers to tend to.

Dave ran some of his own sheep and had borrowed a Texel ram from Mac and Mary Wright, of Ranfurly, to put across his Southdown ewes.

When David saw the Texel ram Golden Terrace 30/17— and its attributes, such as high fertility and good muscle — he made the snap decision to put it across 35 of his Romney ewes.

The decision to introduce the genetics from the three rams had been a good one, he said.

The resulting lambs had been performing well and had plenty of ‘‘hybrid vigour’’ and muscle.

Lambing was the best time of the year to be a farmer.

‘‘It is a real thrill to see them doing it by themselves and to see nature at its best.’’