By Kayla Hodge
0 Comments
A group of women have shown they are among the sharpest blades in the drawer.

Wendy Parsons, Jills Angus Burney, Evelyn McGregor-Koch and Ruby Stone took part in an invitational women’s blade grade at the 54th Waimate Shears at the weekend. The women’s event was believed to be a world first.

While the event was designed to be fun, Parsons smoked the competition, finishing 21 points and four minutes ahead of her closest competitor, former world record holder Angus Burney.

Before the event, Burney said the grade was great for women’s shearing, and she looked forward to the "camaraderie" with Parsons, who she had known for years.

"A few people didn’t think it would work but it did," White said.

In the men’s blades, Tony Dobbs, of Fairlie, added another notch to his already 100 blade shearing titles — a world first — winning the open grade. 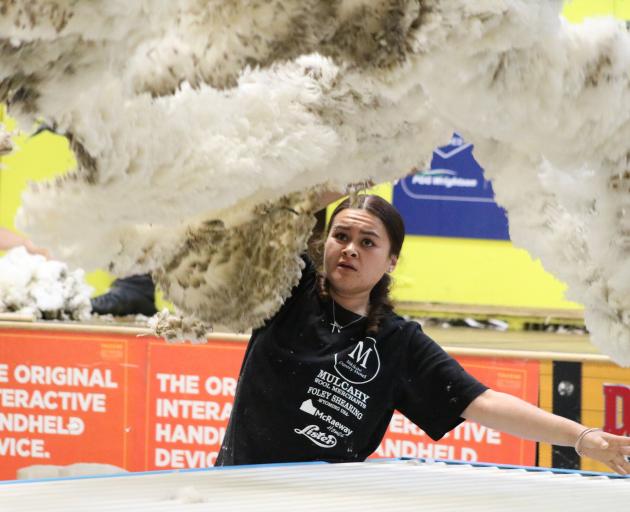 Anahera Cannell, of Alexandra, throws the fleece in a woolhandling heat at the Waimate Shears at the weekend. PHOTO: KAYLA HODGE
Invercargill shearer Nathan Stratford was unable to back up his open win from the week before at Alexandra’s Merino Shears as fellow Southlander Leon Samuels won the open final.

Cheviot’s Troy Pyper won the New Zealand winter comb shearing title, to go back-to-back in the event that was resurrected and held at Waimate for the first time last year.

Gore’s Emma Martin squeaked through to pip Charis Morrell, of Alexandra, for the junior woolhandling title.

More than 200 people competed across the two days of wool handling and shearing, and a further 80 competitors took part in the speed shear.

The show was growing in popularity from where it was three years ago, and created a good "reputation" for itself, White said.

"It went really really good. Everyone had a good time and is giving us a pat on the back for it."

There was a "perfect" crowd, for what was allowed under the Alert Level 2 guidelines.