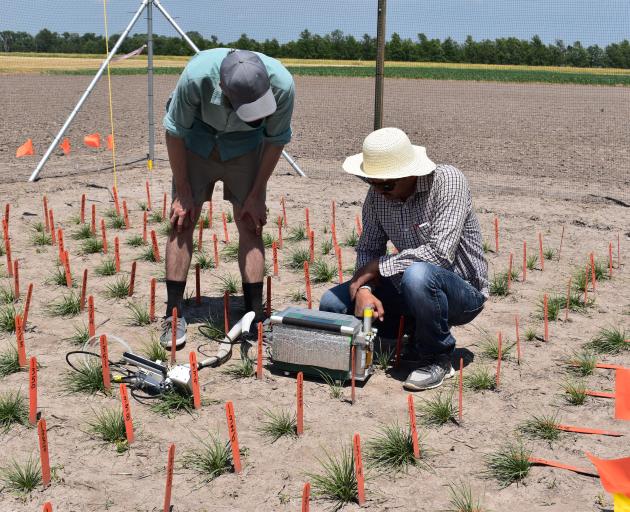 AgResearch scientist Dr Luke Cooney (left) and one of the United States scientists measure photosynthesis in the grass during a preliminary trial in the Midwest United States last year. Photo: Supplied

AgResearch has developed a ryegrass with high metabolisable energy (HME) that can grow up to 50% more quickly than conventional ryegrass, store more energy, be more drought-resistant, and produce up to 23% less methane.

Modelling has predicted that animals eating the ryegrass would excrete less nitrogen into the environment, leading to lower nitrate leaching and nitrous oxide emissions.
The project is funded by the Government, DairyNZ and other industry partners.

Dr Rolleston has followed its progress since he first saw the grass in AgResearch’s laboratories in Palmerston North about three years ago.

The ryegrass is now being grown in field trials in the Midwest United States, where genetically modified organisms were allowed to be tested outside the laboratory.

‘‘While the growth has previously been studied in glasshouses in pots and as plants spaced out in the field, this will be the first opportunity to assess the growth in a pasture-like situation where plants compete with each other,’’ AgResearch principal scientist Greg Bryan said.

‘‘The five-month timeframe will allow us to determine if increased growth is consistent across the summer and autumn, and we will simulate grazing by cutting plants back every three to four weeks.

‘‘Animal feeding trials are planned to take place in two years, which we will need regulatory approvals for, and the information we get over the next two years will help us with our application for those feeding trials.’’

‘‘This research could be transformational in future and so it is important we explore all promising avenues which could help dairy farmers respond to the challenges we face.’’

New Zealand has not approved the release of genetically modified crops, but Dr Bryan said it was important that the science kept our options open.

There needed to be strong scientific evidence on benefits or risks that policymakers could draw on, he said.

‘‘As the Royal Commission on Genetic Modification found, ‘it would be unwise to turn our backs on the potential advantages on offer’.

‘‘We think the advantages here could be very significant, with modelling to date showing the HME ryegrass could boost farm revenues by as much as $900 per hectare, while providing a tool for farmers to manage nitrogen run­off and greenhouse gas emissions.

‘‘The Royal Commission also talked about the need to proceed with caution, minimising and managing risks, which is how we are approaching this work with the ryegrass.’’

Dr Rolleston took two other South Canterbury farmers with him to see the grass in Palmerston North. They were indifferent at first, but soon became ‘‘quite agitated and angry’’ that they could not get their hands on it right away.

‘‘It’s very clever science they’ve used to produce this grass. It was not a very easy exercise.

‘‘It’s the best science since Rutherford split the atom.’’

New Zealand had to take genetic modification case-by-case, Dr Rolleston said. When the topic was debated 15 years ago, there were was ‘‘nothing really applicable’’ to this country. We were not growing soy or cotton, did not have European corn borer, nor the pest pressures the rest of the world was facing.

But that was changing, he said. There was talk of using genetic technology in biosecurity, such as making the painted apple moth sterile.

People who believed New Zealand should be GM-free might not realise four genetically­modified organisms have already been approved by the Environmental Protection Authority, two for human pharmaceuticals and two for animal treatments, he said.

‘‘We need to make sure the regulations are appropriate.’’