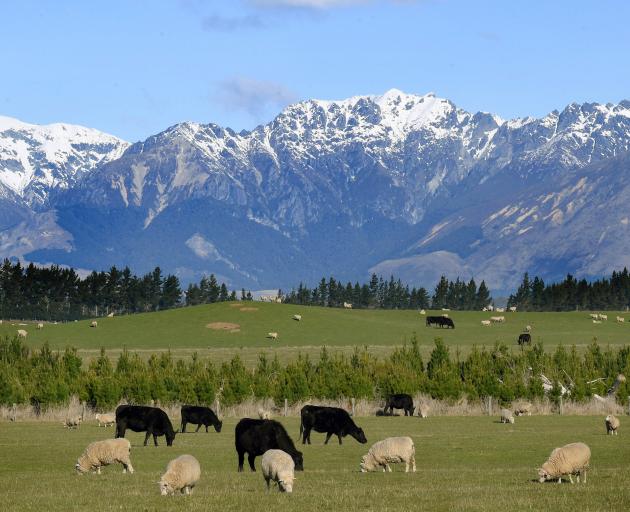 New technologies are expected to reduce emissions from the farming sector by up to 30%, but there is a lot of uncertainty as to when. PHOTO: STEPHEN JAQUIERY
The Climate Change Commission will release on Monday its recommendations on a path to meet its net-zero 2050 emissions target; proposed limits to greenhouse gases that can be emitted over the next 15 years; potential reductions in biogenic methane that might be needed in the future; and our obligations under the Paris Agreement. How we get our food and farming is likely to be in the spotlight, Hamish MacLean reports.


Livestock numbers in the lower South Island could come under the climate change spotlight as New Zealand starts to make the far-reaching changes it needs to to reach its carbon emissions goals.

New Zealand has kept the methane produced on farms, one of its biggest sources of greenhouse gases, out of its net-zero 2050 emissions target.

But when the Climate Change Commission releases its draft advice on Monday, future reductions in emissions from livestock digestion will be part of the discussion.

New Zealand’s separate biogenic methane targets for 2030 (10% below 2017 levels) are not due to be reviewed until 2024, but alongside approaches such as solar and wind farms to generate energy, fewer animals on farms has been suggested as a strategy the country could consider as it begins to face the reality of climate change.

Emissions reductions will be important in every sector.

Transportation, energy, building and waste are often highlighted as needing a transformation.

But now Otago researchers warn the coming changes will cut across sectors affecting everyone’s lives, including how people work, how they live, even what people eat.

Otago’s Climate Change Network co-director Sara Walton said New Zealand’s transition to a low-carbon economy would be viewed as an opportunity by some, but as a threat by others.

Many would see the systemic changes brought about through the independent commission’s work as too stringent, or unnecessary, because it would involve a change from business-as-usual.

It could be a bumpy ride.

"But it will be bumpier to not transition," she said.

The draft advice will steer the Government on its first three carbon emissions budgets for each greenhouse gas, from 2022 to 2035.

The commission will offer guidance on an emissions reduction plan to be in place by the end of the year.

It will advise on policies to target different sectors.

But it will also review New Zealand’s contribution to the Paris Agreement — the 2016 international treaty aimed at limiting global warming to 1.5degC above pre-industrial levels.

And it will give advice on reducing the biogenic methane caused by livestock digestion that could be required as part of the agreement.

DURING a video conference previewing the release of the draft advice, Climate Change Commission principal analyst Sally Garden said there were two ways to reduce emissions on farms: improved technology, or changes to farm management.

A methane vaccine for livestock represented the big hope for the future but there were other possibilities — feed that inhibited methane, for example, Ms Garden said.

New technologies were expected to reduce emissions from the farming sector by up to 30%, but there was a lot of uncertainty as to when.

"And if new technologies don’t come to fruition, then we’d likely need to see land-use changes into other low emissions uses like horticulture or forestry," she said.

Emissions related to food’s storage, its retail, its transportation, and food waste could be reduced by people eating only food that was in season, Dr Connelly said.

Yet despite the meaningful impact of people’s diets in the city, city residents improving their diet would not be enough.

But a truly sustainable diet meant farmers were compensated and could make a living out of producing the food people ate, he said.

"It’s not just consumers, it’s also thinking about what producers are doing, what’s happening on farms — and I think in the past we’ve treated those issues in isolation.

"If we can join them up, and recognise that both producers and consumers have an interest in and ability to change the food system, then you can address those ‘harder to pick fruits’."

University of Otago, Wellington, senior research fellow Cristina Cleghorn said the main challenge was to ensure a transition happened in a way that worked for farmers.

Dr Cleghorn said New Zealanders needed to reduce their consumption of foods that had the highest associated carbon emissions and replace them with lower carbon options, which likely meant reducing the amount of red meat eaten and finding plant-based alternatives.

But the largest proportion of emissions came on farm at the production stage, she said.

"This is where we can make the largest gains, by reducing the number of ruminant animals on New Zealand farms," she said.

Still, because New Zealand exported most of its food the change in demand for high carbon emission foods needed to come from the international market, she said.

Climate Change Commission chairman Rod Carr said consultation was an essential part of the commission’s work and it would carry on for some time.

The advice to Climate Change Minister James Shaw, due on May 31, would be the commission’s first package of advice to the Government.

But there were 10 election cycles between now and 2050 when New Zealand must meet its climate goals, Dr Carr said.

I will argue until I am blue in the face that our 6000su family sheep farm is Carbon neutral based on science. These Carbon budgets cannot disregard that 100s of trees don't undertake photosynthesis just because they are not planted in a plantation with a minimum size of 1ha etc etc....let alone the 100s of hectares of 'green' pasture.
The Biogenic Carbon Cycle is natural and coverts methane to CO2 after 12 years. Plants reabsorb the carbon. Bare soil does not absorb carbon. Fossil fuels are not part of the Biogenic Carbon Cycle.
Rufuse in NZ is not natural. It was so easy to ship our waste to China. Good on them for saying NO. Leaders need to invest in dealing with our rubbish, I for one am over the virtue signaling...'do as I say, not as I do'. We need to invest in recycling not say it is too expensive. Wait until rates for ALL New Zealanders go up to meet the National Policy Statement for Fresh Water, let alone dealing with waste. As humans we need to own our footprint on the environment.
He waka eke noa
Ngā mihi nui

These are the 5 things agriculture must do:
1. Improve agricultural productivity in sustainable ways that lower emissions and allow us to feed a growing global population.
2. Reform food and farming regulations that lead to overproduction, waste food and distort prices and increase agricultural emissions.
3. Use the tax system and support payments to reduce emissions, taking care to avoid inflating food prices or driving farmers out of business.
4. Include agriculture in national climate change strategies to ensure its effects are not overlooked.
5. Help consumers and producers make informed food choices and reduce food waste.