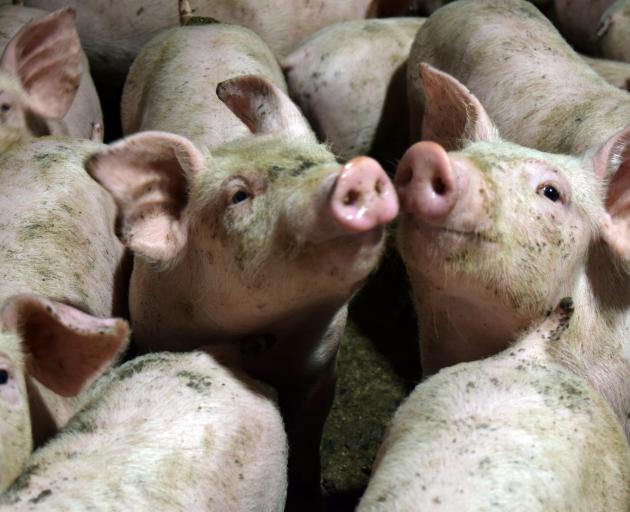 Pigs in Bloem Farm on Otago Peninsula. Photo: Shawn McAvinue
If a new draft code of welfare for pigs gets approval, thousands of piglets will be crushed and piggeries will close, Otago pork producers say.

The Ministry for Primary Industries and the National Animal Welfare Advisory Committee are consulting on proposed changes to how pigs are farmed in New Zealand.

The changes being proposed include: 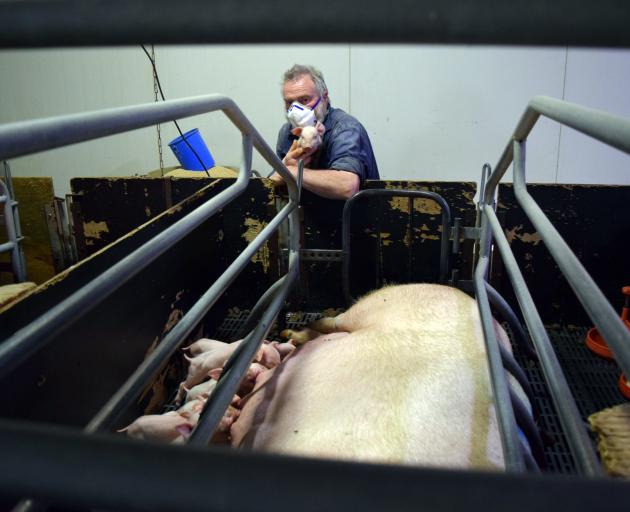 His 300 breeding sows, use 35 farrowing crates indoors on the farm, which fattens about 7500 pigs a year.

The proposed changes were a "step backwards" for the welfare of pigs.

Farrowing crates were "an essential tool" in a piggery.

If a new rule was introduced prohibiting the use of farrowing crates, many pig farmers would ignore it.

"Otherwise the whole industry is destroyed — we will have to shut up shop."

He started pig farming at the age of 17, working for his father.

"My father had no farrowing crates and it didn’t take long for me to be on the verge of a nervous breakdown because we were losing up to 80% of our piglets."

Piglets stood under their mother because of the heat she radiated.

The sow would remain standing due to fear of squashing the piglets.

"I’ve seen sows absolutely agonising about how they were going to lie down. It’s nuts."

The bars of a farrowing crate allowed a sow to get slowly from a standing to a lying position, giving the piglets time to get out of the way.

Piglet litters were much bigger now than they were when his father ran the piggery.

About a third of the sows these days would produce large litters of from 18 to 20 piglets.

Farrowing crates had helped him keep the pre-weaning mortality rate of litters to about 10% — a big drop from up to 80% deaths when they had no farrowing crates, he said.

He spent about $1.4million a year on feed so he needed a high survival rate of his piglets to get a return on his investment.

"Nobody pays us for dead pigs."

The proposed rule to increase space allowances for grower and weaner pigs would require him to give them three times more space than he does now.

Some pigs preferred their own space.

Often sows in an open spaces fought, and they felt protected in a stall.

"They are vicious — they go at it hammer and tongs."

He had never forced a sow to enter a stall, he said.

"Farmers are really angry at the way we’ve been treated."

Ian Carter, who runs about 2000 pigs, including 200 sows, near Hampden in North Otago, said the proposal to increase the weaning age from 21 days to 28 days was "unworkable" because it was not practical to wean everyday, as the sows did not all farrow all on the same day."

A sow was a "dynamic animal" and the rules were treating it as a machine, producing piglets to order.

"It doesn’t operate that way, we have to operate within the social needs of the animal."

Piglets grew fast and a litter at 28-day-old piglets could have grown to a size where they were damaging the sow by drawing too much milk.

A rule to require nesting material to be provided prior to farrowing would make it difficult to keep farrowing facilities clean and hygienic for the pigs.

A build-up of urine and dung in nesting material would increase contaminants and compromise the health of the pigs.

Farmers provide heat lamps to keep piglets warm, negating a need for a sow to build a nest.

"What they are trying to do is so prescriptive, it makes it hard to run your farm efficiently and look after your animals — it’s in our interest to look after our animals."

The proposed rules were "frustrating" because they did not provide an alternative solution to using farrowing crates.

The proposed rules had the potential to "decimate" the New Zealand pork industry because it would make it more expensive to farm pigs in New Zealand and it would be unable to compete against cheaper imported pork, he said.

"What will this do for pig welfare? It will do nothing because it pushes production to a low standard offshore."

New Zealand Pork chief executive Brent Kleiss said the new draft welfare code for pigs could result in the deaths of up to 60,000 additional piglets every year and require almost every indoor and outdoor pig farm to be partly or totally rebuilt.

“The New Zealand pork sector welcomes and encourages positive change where there are proven and well-researched animal welfare outcomes for all pigs; however, this draft code lacks scientific credibility and justification.

“It imposes unachievable minimum standards on farmers and will effectively wipe out New Zealand’s pig industry."

Farrowing crates were the maternity ward for sows.

Sows were housed in farrowing systems to give birth and care for their piglets, spending a maximum of 28 days in conventional indoor systems after giving birth, and up to five days pre-farrowing.

Farrowing systems were designed and proven to significantly reduce the main causes of piglet deaths such as starvation, hypothermia and being accidentally crushed by the sow.

No country had completely banned the use of farrowing crates, he said.

Both of the proposed minimum space requirement options in the draft code significantly exceed those required in the rest of the world.

“While we all want the production methods the sector uses to be ethical and the products of high quality, the extreme bar set in the proposed pig code and the apparent lack of understanding of the pork industry should greatly concern other livestock sectors reliant on animals to produce these important export products,” Mr Carter said.

Farmers opposing change because of possible adverse effects on the welfare of their pigs is the ultimate in double-speak.

They oppose the changes for one reason only: the possible adverse effect on their back pocket. Which is fine; but making it out to be motivated by something more noble is not.