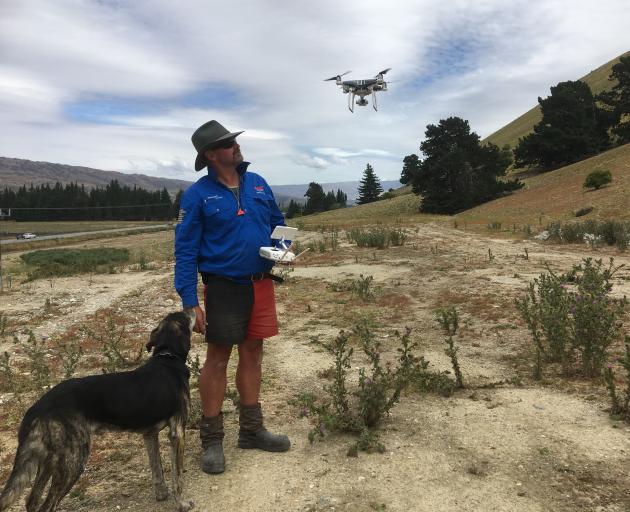 Tony Buchanan, of Bannockburn, with his dog, Wolf, often muster Central Otago hills with the help of a drone. The Lowburn Collie Club even added a drone component to its recent dog trials. Photo: Alexia Johnston
Dogs and their masters are going to new heights in their bid to be the best in the field.

The Lowburn Collie Club added a drone component to its recent dog trials, testing the skills of the musterer while using the airborne device, now commonly used in the high country.

Musterer Tony Buchanan was among those who attended the event, complete with a ute full of loyal dogs and a Phantom 4 Pro.

He said the device had come in handy over the past two years while mustering sheep and cattle.

The noise of the drone's props pushes the stock along country, and the dogs provide extra noise with their bark.

Mr Buchanan, who is based at Bannockburn, musters between two to three days a week.

The drone is often used during those excursions, for about 25 minutes at a time.

The battery is replaced and it is ready to keep working.

''They are just a great machine. You can save a lot of time with it,'' he said, of its many benefits.

Mr Buchanan was initially unsure the device would be of use.

''I was skeptical for a start, but they are no longer a toy, they are a machine.''

The drone provides Mr Buchanan with video footage of the stock while they are being mustered.

However, the main benefit of the drone was the time it had saved.

''Some days I can save two to three hours by the time you walk out and where you need to go. But, you still can't beat your dogs,'' he said.

However, director Mike Borthwick said although the devices have had their place within the company, they were not used as much as they previously were.

The company started using drones in 2013 after it purchased a fixed-wing model.

However, it has since realised using a manned aircraft was often more viable for much of the work it does.

He said drones were a practical device for covering a small area, but not so much for large-scale farms.

''It depends what you are doing with them.''

Landpro flies over about 40 properties every week for plant health and weed monitoring, a process that can take much longer with a drone than a manned aircraft, he said.

''We still certainly use drones in that space, but on a much smaller scale.''