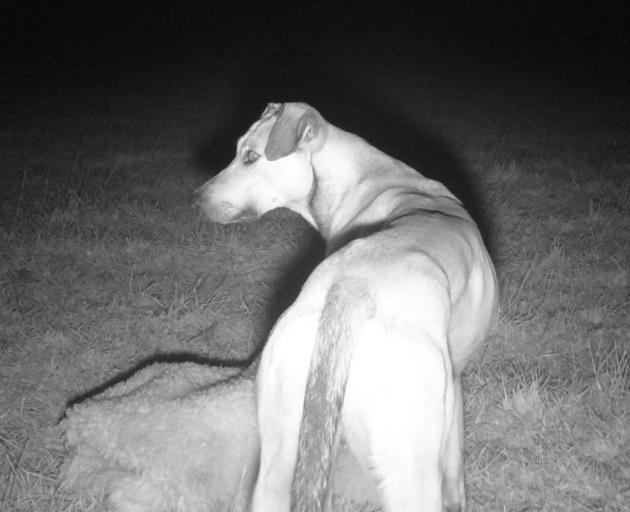 In desperation, farmer Doug Brown has installed thermal cameras on his property, which have captured an image of the dog, which is of an unknown mixed breed.

It is tan with black markings on its face and neck.

Waitaki District Council senior compliance officer Tristan Hope said the dog’s identity had not been confirmed but it was suspected to be a dog that had become feral after it escaped from its owner several months ago.

Mr Brown said the dog’s owner had unsuccessfully attempted to catch it.

"We can’t be totally sure but it points to this one dog," Mr Brown said.

"He is very elusive and is going to be hard to track down.

"He seems to be all over our place in different paddocks."

Mr Brown said he was trying to capture the dog, or as a last resort shoot it, but because it turned up in different paddocks it was hard to predict where it would turn up on any given night.

"We have just got to keep battling away and hopefully someone can pick him up," he said.

"It’s extremely elusive and can probably pick up scents of people that are out there."

Mr Brown said his farm worker was "absolutely furious" about picking up dead or injured lambs most mornings.

Mr Hope said council staff were investigating the possible origin of the dog and attempting to positively identify it.

"Landowners may report any dog attacks to council, who will investigate the matter as far as possible," Mr Hope said.

"They should regularly check their stock and may also wish to approach neighbours to raise awareness of the problem in case other property is at risk."

The owner of any stock or poultry could seize or destroy any dog running at large among those animals under section 60 of the Dog Control Act 1996, he said.

Can be shot on sight.

I am a dog lover, but any dog of mine that inured or killed a farmers income, I would do the right thing; have the dog put down and reimburse the farmer for his losses, especially if it had been killing over a long period of time,

The sad thing about it, is that it's probably just a game to the dog that's escaped from the owners control.

Unfortunately there are not many options left ...