By Richard Davison and Louise Scott and Karen Pasco
0 Comments 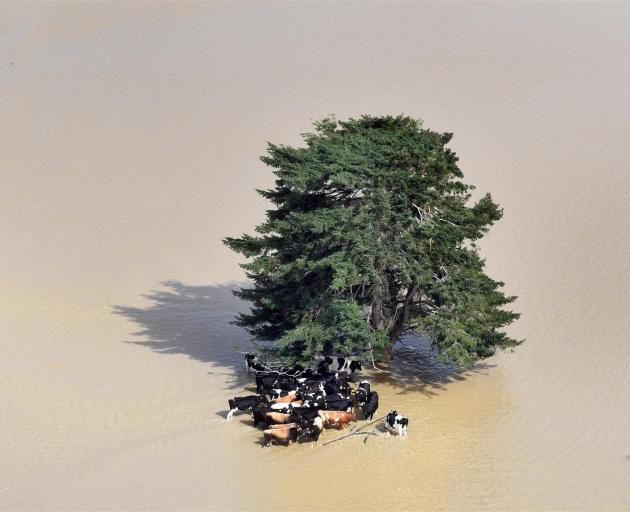 Dairy cows are stranded upstream of Gore. Photo: Stephen Jaquiery
Farmers across Southland and Otago are counting the cost of serious flooding which has left hundreds of farms underwater and resulted in lost livestock and ruined crops.

The Government declared last night it was a ‘‘medium scale adverse event’’, opening the way for funding of $100,000 through Rural Support Trusts to speed up recovery and provide technical advice.

Rural Communities Minister Damien O’Connor, who had flown over the affected areas, said the response to the flooding event had been ‘‘absolutely amazing’’. 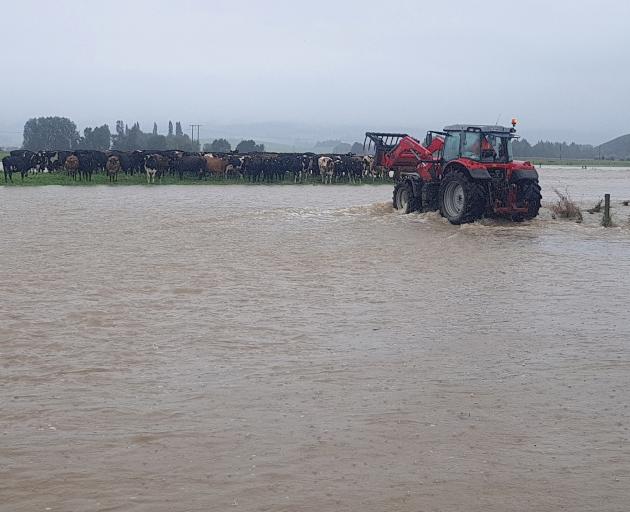 Kelso dairy farmer Adam McCall attends to stock stranded by the Pomahaka River. Photo: Georgie McCall/Supplied
‘‘You get perspective really quickly when something like this happens. The first priority is human life, the second is stock life and after that everything else becomes incidental. We deal with whatever it brings.’’

She said it was too early to know the full extent of the damage.

‘‘A lot of work went in yesterday [Monday] to protect stock to minimise losses there ... There were helicopters helping get cows across rivers and things like that.

She confirmed ‘‘some’’ lost stock but was unable to provide figures.

‘‘If the water hangs around for four or five days then it will be 100% lost crops and the implications on winter feed will be hugely significant. But we just can’t quantify the loss of stock or crops at this stage.’’ 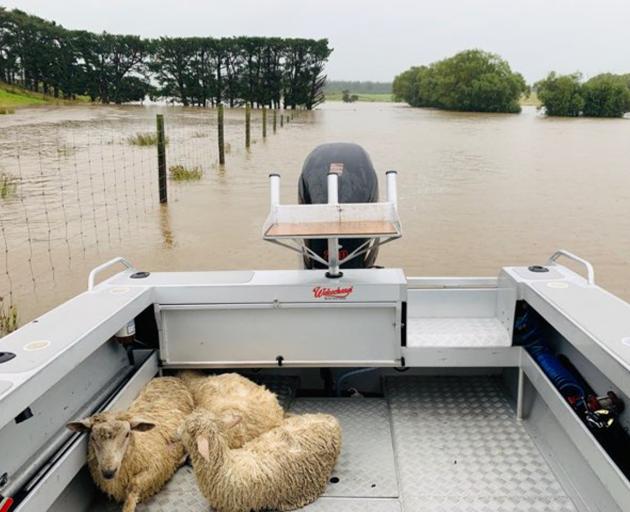 Nathan and Kellie Grant, of Hedgehope, used the family boat to rescue three lambs on their flooded farm on Tuesday. Photo: Supplied
But there were also tales of triumph.

It took some Kiwi ingenuity for Hedgehope farmers Nathan and Kellie Grant to rescue three lambs at their property on Tuesday.

Their farm has about 40ha of river flat.

They had moved almost all of their livestock to higher ground a few days ago, before the flooding occurred, but three lambs were left behind and became stranded.

They decided to use the family boat to rescue them.

The lambs were a bit cold but recovered quite quickly.

A West Otago dairy farmer described being taken aback by the rapid advance of floodwaters on his property during Tuesday afternoon.

Adam McCall, who runs a 330ha dairy farm in the centre of Kelso, said despite starting preparations for the deluge last week, he still needed to take swift action to move stock to safety about 5pm on Tuesday.

‘‘We had a leisurely milk Tuesday morning and moved the cows back to what we thought were some safe paddocks a bit higher up.

‘‘The [Pomahaka] river was still behaving at that point, so we were a bit surprised Tuesday afternoon when we went out to have a look and had to swim a few cows out and on to a neighbour’s farm for the night.’’

By yesterday morning, the cowshed had been inundated, along with ‘‘85 to 90%’’ of his farmland, he said.

By 4pm yesterday, only 50% of the farm remained flooded, and he expected to be able to carry out a full inspection by tomorrow.

‘‘You can see a bit of damage to fencing, and we’ve lost about 500 bales [of feed] down river, but it’s probably not too bad.’’

DairyNZ reported more than 100 dairy farms in Southland and South Otago were severely affected by the floods.

DairyNZ’s South Island manager, Tony Finch, said these farms were either under water or cut off, with access roads flooded.