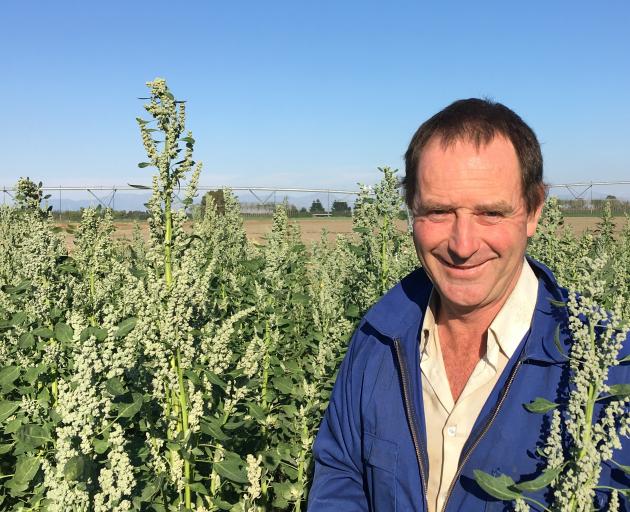 Methven grower Andrew Currie among the quinoa trial plants due for harvest in May. Photo: Toni Williams
The ancient grain quinoa (pronounced keen-waa) is touted as a new superfood but its history stems back to ancient times in South America.

It is successfully grown in New Zealand (in both the North and South Island) but is still imported in large quantities from Bolivia and Peru, as well as Australia.

And that is something Methven farmer Andrew Currie, and his partner Gaewynn Hood, at Avonmore Farm, on State Highway 77, just out of Methven, want to change.

Mr Currie, the third generation of growers on the property, knows of just three other substantial growers in New Zealand: two in the North Island and one in the South Island.

Both South Island properties are near Methven.

Mr Currie, with marketing and on-farm help from Ms Hood, has been growing quinoa for the past seven years.

''It has all the nutrients, fibre, amino acids we need to stay alive,'' he says, of the Canterbury Quinoa brand.

It's also naturally gluten-free (tested and proven), and is not sprayed, bleached, heat treated, irradiated or polished.

Among its traditional grains and herbage seed, the 300ha property has grown other ancient grains such as Hungarian millet, buckwheat, amaranth and spelt.

But 10ha has been set aside for their Canterbury Quinoa product, which guaranteed supply demands.

There is also a one-hectare trial quinoa plot planted in October, and due to be harvested in May.

Mr Currie says the main qinoa patch started with just two kilograms of seed which, over time, had grown to provide tonnes of seed.

They did not market their product too early, as they were still learning from their mistakes.

But can now guarantee supply to their existing customer base and any future customers, whether it be one kilogram or 10 tonnes.

They supply markets, wholefood outlets, restaurants and co-ops throughout the country and have been included in the Ooooby Box product range.

Locally, it is sold through The Green Grocer in Tinwald, or through the business' website.

''It's been a constant learning curve since setting up.''

''It's difficult to establish, easy to grow and a challenge to harvest.''

''It sprouts [flowers] readily pre-harvest and the birds give it hell.''

Their ethical production uses natural ways to deter birds by encouraging hawks to patrol the area. They harvest and dry product with uncontaminated (or gluten-free) equipment and package in brown paper bags with corn-starch windows.

Quinoa, from the same family as fathen (a weed), grows to be around two metres tall.

It is drilled, or conventionally planted and does not have high water requirements.

Mr Currie says older varieties of quinoa seed had a saponin coating similar to detergent that tasted bitter, so quinoa had to be washed thoroughly before use.

The newer quinoa had less saponin and only needed minimal washing.

Quinoa has many uses: in salads, baking, as a breakfast cereal, or ground as a flour.

It was cooked one cup to three cups of water, or used uncooked in baking (which was cooked).

Once cooked the seed opens and expands.

Andrew says the future of Canterbury Quinoa included seeking a distributor and looking into organic certification.