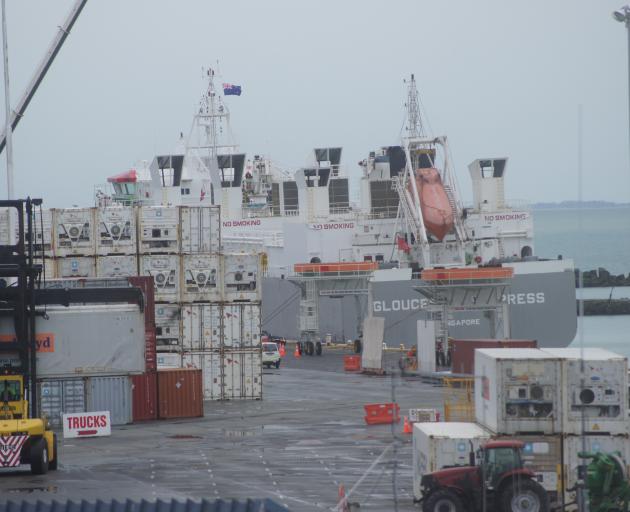 Gloucester Express loads 3700 cattle at PrimePort Timaru in December last year, one of only three shipments made from New Zealand in 2018. In 2017, a total of 27,295 cattle were exported in eight shipments, six of which were bound for China. There were 19 cattle deaths during shipment. Photo: Chris Tobin
A conditional prohibition on livestock exports is ''potentially'' the best option to protect exported animals and New Zealand's reputation, Agriculture Minister Damien O'Connor says.

In a Cabinet paper just released on the proposed review of the live export trade, Mr O'Connor presented five options prepared by MPI, one being a total prohibition, thereby stopping the trade.

The other options were collaborative programmes to build the capacity and capability of the destinations and/or encourage alternative exports; continuous improvement under current regulatory settings; and finally, targeted interventions, development of new operational policy and continuous improvement.

''A conditional prohibition by regulation effectively shifts the policy approach from generally approving livestock exports to prohibiting these exports unless the prior approval of the director-general is granted,'' Mr O'Connor said.

''In approving an export the director-general must be satisfied that the risks to the welfare of livestock being exported and New Zealand's reputation can be mitigated.''

The review was announced in June, after reports of cows dying while being exported from New Zealand and Australia to Sri Lanka by Australian live export corporation Wellard Lt.

Animal rights group Safe said the review ignored 99% of exported farmed animals and included only the export of cows, deer, sheep and goats for breeding.

''Farmed animals such as day-old chicks are exported in the millions every year,'' campaigns officer Mona Oliver said.

''We've already completely banned the live export of cows, sheep, goats and deer for slaughter, so we know we can act to protect the welfare of New Zealand animals. The minister must close the loopholes and completely prohibit the live export trade of all farmed animals.''

Mr O'Connor's paper stated live animal exports were valuable to New Zealand, averaging $251million a year between 2010 and 2018 and had been an essential part of many of New Zealand's trading partnerships.

''The export of livestock also assists in enhancing relationships with other countries to develop their domestic herds, through access to New Zealand breeding genetics.

''We have mechanisms to manage the risks to livestock being exported during their voyage.

''However, we have limited ability to influence the welfare of animals once they reach their destination.''

MPI is reviewing the livestock export trade. Mr O'Connor intended to provide a draft Cabinet paper with a discussion paper for cross-party discussion by the end of the year.

After this, he would make an announcement on the next steps to be taken.