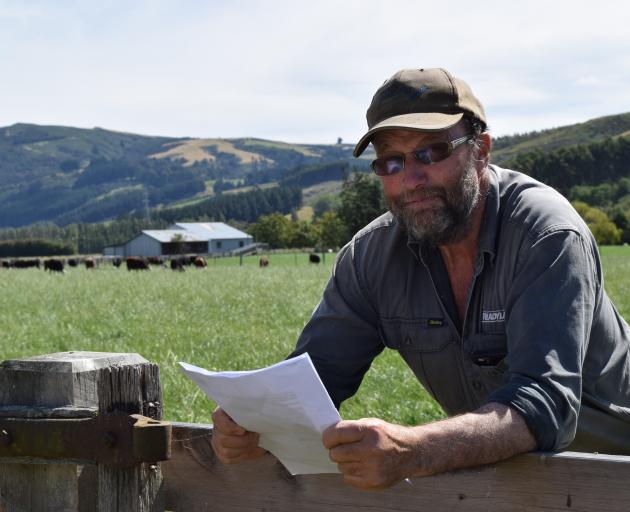 Sheep and beef farmer Fred Doherty reads a letter from Otago Regional Council declining his application seeking consents to build a wintering shed on his farm in Outram. PHOTO: SHAWN MCAVINUE
A frustrated West Taieri farmer is calling for the Otago Regional Council to do better so he can achieve his dream of building a shed to keep his cattle warm and dry.

The council says it will seek ways to improve its service.

Fred Doherty, of Outram, said he had expected the process to get the consents required to build a wintering shed in the middle of his 90ha sheep and beef farm to be "simple and basic" but it had been "frustrating" and made considerably more expensive by red tape.

"It’s been a dream of mine to be able to put my stock inside for winter and to know that whatever nature throws at them, they are safe, warm and dry and your farm is getting looked after."

He had a strong attachment to his land, which had been owned by family since 1912.

The proposed shed would be about 45m long and 18m wide and house about 150 of his yearling cattle.

He contacted the council in September last year and asked what information was required to secure the four consents required.

The officer helped him complete some sections, such as GPS co-ordinates on the farm.

Mr Doherty paid the $1750 application fee and was told the council target was to process it within 21 working days.

Mr Doherty expected to get approval before Christmas but Mr Doherty was posted a rejection letter dated December 15.

The letter stated the application was incomplete as it "does not contain information required by the 4th schedule of the Resource Management Act/the NES-F and the Otago Water Plan 2020".

The application being declined was frustrating as he had met the consents officer before submitting it and completed everything he was asked for.

The letter also recommended if he applied again he might find it beneficial to schedule a pre-application meeting to ensure all the information needed was considered in an application.

"I did that," Mr Doherty said.

The application fee would be refunded minus "costs incurred accessing your application", the letter said.

"They are going to charge me for saying no."

The refund was yet to be paid, he said.

The letter lacked "goodwill" and had a "confrontational" tone.

The council was "process driven" rather than "outcome driven".

"They’re not trying to help me at all. They could be a bit more user-friendly."

A new shed would be beneficial to his cattle and the environment so the council should be working to help him make it happen, he said.

If he was seeking consent for a dairy conversion, he would understand the process being more rigorous because the herd size would increase, but his stocking rate would remain the same.

The longer the process took, it delayed his ability to capture the effluent of his herd in the shed and use it as fertiliser.

"It’s a win, win, win. I’m trying to improve the world — at not an inconsiderable cost — and I feel like there is no will in the world to make it happen."

He did not have to have the shed built to meet any obligations but wanted to for "peace of mind" when it got "cold, wet and awful".

He planned to send the council a photo of the stock standing in a paddock on the bitterest day this winter to show what its lack of action had achieved.

He planned to reapply and would need to pay another $1750 application fee, he said.

To progress a new application, he had employed a consultant from Invercargill.

"They’ll take notice of him because he has letters behind his name."

In hindsight, he should have employed a consultant from the outset.

"It was never going to work but the council didn’t tell me that. They just told me to fill out the forms and the job would be done. It frustrates the hell out of me and I think they can do better."

He wanted the council to be the best in New Zealand and be able to deliver results.

"At the moment it feels like it’s them versus us and it shouldn’t be like that. Yes, there’s rules but we should all be singing off the same ... hymn sheet and be getting stuff done."

He believed as he filed the first application under new freshwater regulations the council was "floundering" to deal with the rules "dumped" on them by central Government.

Mr Doherty wanted it to be clear Southern Rural Life approached him for comment, as he did not want to antagonise the council and reduce his chances of getting the consents.

Council consents manager Joanna Gilroy said the consents were required under the council’s Plan Change 8, which was introduced last year and aimed to improve water quality in Otago.

"We recognise that as a new process there are things that can be improved and we will take on board comments and feedback from customers.

"On this occasion, we acknowledge that this process would have benefited from a single point of contact and a site visit when the request for advice was initially received," Ms Gilroy said.

"Following a recent site visit and advice provided to Mr Doherty we are now working to progress the application."

The council was seeking to provide as much support as possible for these new consent types, and the site visit reflected this approach, she said.

"We take on board Mr Doherty’s frustrations with the process and will continue to seek ways to improve the service we provide to our customers. We strongly encourage anyone looking at applying for this type of consent to contact us as early as possible, and we will get out on site to support them and provide all the information we can."

Mr Doherty said the last contact he had with the council was the letter declining his application dated December 15.

What do you expect from an incompetent and unnecessary council?