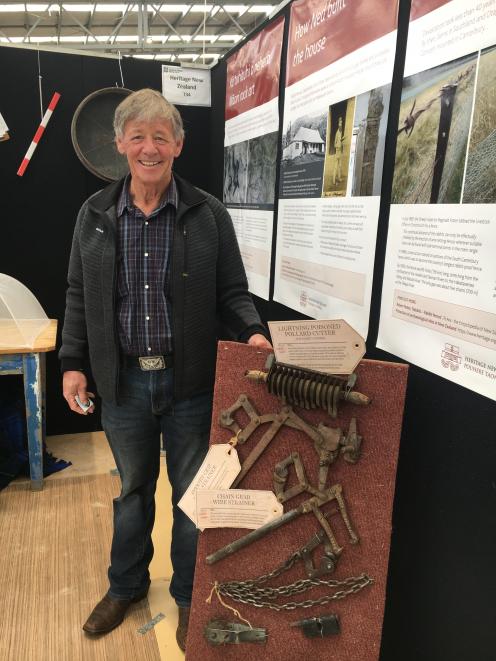 Ken Gillespie was helping out on the Heritage New Zealand site at the New Zealand Agricultural Show last month to raise awareness of archaeological items on farms. This Pollard cutter was once used for rabbit control in South Canterbury. Photo: David Hill
Hidden treasures may be buried on your farm.

Heritage New Zealand was on hand at the New Zealand Agricultural Show in Christchurch last month to give farmers some tips on what to do if they found archaeological treasures on their farms.

Archaeologist Gwen Jackson said any historical artefacts created before 1900 were of interest.

“Under New Zealand law, anything in New Zealand that was created by humans and is evidence of the occupation before 1900 is protected as archaeology and you have to have an authority from Heritage New Zealand if you are going to impact that.”

She said there was a wide range of archaeological items to be found on Canterbury farms, including Maori rock art, rabbit-proof fences and the remains of pre-1900 buildings.

Ms Jackson said there were more than 700 known examples of Maori rock art within the Ngai Tahu rohe, almost all on private land.

Rabbits were introduced to South Island farms for sport in 1838, but quickly spread throughout Otago and Southland.

In July 1887, sheep inspector Reginald Foster lobbied the Livestock Office in Christchurch for a fence.

The following year work started in South Canterbury on what was to become New Zealand’s longest rabbit-proof fence.

By 1890 the fence stretched 85 miles (136km) from the confluence of the Tasman and Hooker Rivers to the Waitaki River and Hakataramea Valley, missing just five chains (or 100 metres) at the Tekapo River.

Six caretakers and one sub-inspector lived along the fence line to maintain it, using corrugated iron huts, which were lined with timber and heated by an open fire.

After complaints about rabbits popping on the wrong side of the fence, Pollard cutters were employed as a labour-saving device for cutting sheets of dried rabbit poison.

A second rabbit fence was later built in North Canterbury.

The cob cottage was built in 1863 to provide a place to stay for travellers between Nelson and Canterbury.

It was badly damaged in the 2016 earthquake and during repairs, archaeological investigations found the original cob walls were made of local tussock, clay, animal dung and water.

Wooden wedges or ‘‘nailing pegs’’ were built into the cob so things could be nailed to the walls, but while the pegs supported the door frames and skirting boards, no picture rails were ever put up.

The original house had no hallway, with one being added later with newer materials, presumably so staff did not have to traipse through the sitting room.

Evidence of whisky bottles, mutton bones and a child’s skipping rope were found beneath the floor.

Ms Jackson said anyone who thought they had uncovered items of archaeological interest should contact Heritage New Zealand in Christchurch (03) 363-1880 or Dunedin (03) 477-9871.