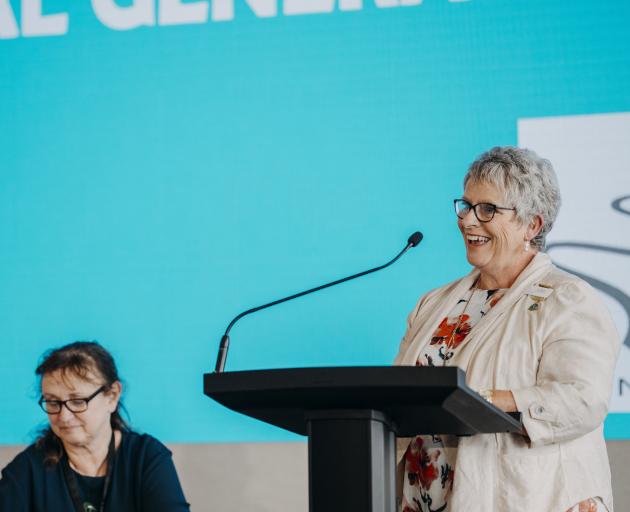 That is how Alexandra woman Gill Naylor described her feelings on recently being elected national president of Rural Women New Zealand, an organisation she said had to meet the needs of the "women of today".

Mrs Naylor has been a member of the Cambrian St Bathans branch of RWNZ for more than 30 years.

Joining Women’s Division Federated Farmers (as it was known before a name change in the late 1990s) was a natural progression for the mother of three, having been involved with the likes of Plunket and play group.

"If anything happens in a rural community, it’s done by volunteers and I thought it was a wonderful way to contribute to the community and have lots of fun while doing it," Mrs Naylor said.

She was from a rural background, growing up on a farm about 20 minutes from Invercargill. After leaving school, she worked in Invercargill before moving to Alexandra to a job in a bank.

She met her husband Dave and moved to his family farm at Becks where the couple farmed for just short of 40 years, before moving to a lifestyle property at Alexandra.

The Cambrian St Bathans branch was a busy club which ran, as one of its main events, the annual St Bathans village fete in January.

It also held a community children’s Christmas party and the longevity of that popular event was illustrated by the fact there were now grandparents attending who had come along as children themselves.

Cushions were sewn for breast cancer patients every year and there was a wide range of community service undertaken in the local community.

While it was not all about fundraising, if an opportunity arose, members would take it. There was also a lot of fun, she said.

A few years ago, an opportunity through the Central Lakes Trust — which invited people from the community to go on leadership courses — was pivotal in giving Mrs Naylor more belief in herself and also understanding other people.

Two years ago, she joined the national board. The role of national president was a two-year term, followed by another election cycle, so there was a four-year maximum term.

When it came to her tenure, Mrs Naylor wanted to ensure the organisation’s profile continued to be raised publicly, along with building membership and making sure if was offering what women were looking for today.

RWNZ was celebrating its centennial in 2025 and it needed to ensure it had younger women coming through to take the organisation on for the next generation.

RWNZ did "an awful lot of good work" in a lot of different ways but she was not sure that the diversity in what it did do was generally widely known.

It was about social networking, community service and learning opportunities. "Strengthening, supporting and connecting people and communities — that’s us," she said.

It was a misconception that you could not be a member if you were not on a farm.

"You don’t have to be a farmer to join, it’s about rural communities as a whole. We can create something that will suit your needs. It’s about meeting the needs of the woman of today," she said.

Mrs Naylor’s own involvement had led to "lots of opportunities", including becoming a trustee of the Life Education Trust Heartland Otago Southland and she was part of the independently appointed Central Otago District Council representation review panel.