Exciting year in dairy for Kimberley 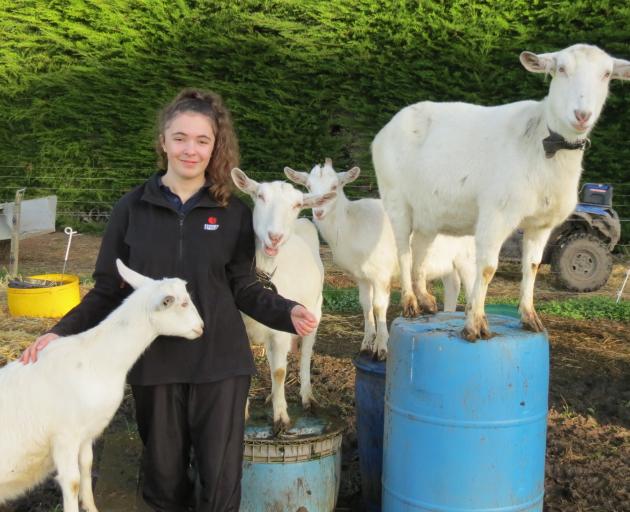 Kimberley Simmons and her brother Jack have four Saanen dairy goats, two of which are adult females that are milked each day. They are well trained and stand on barrels for milking when required. Photos: Teena Simmons
Kimberley Simmons (15) is passionate about dairy cows and has had an excellent year so far, dairy-wise.

It has included a trip to International Dairy Week in Australia in January, and a win in a national competition last month.

The Menzies College year 10 pupil lives with her parents Teena and Sandy and brother Jack on a 61ha property near Dacre.

The family runs 175 cows and several chickens, and they have three studs - the Brydale Jersey Stud, the Lowburn Milking Shorthorn Stud and the Lowburn Holstein Friesian Stud.

She attended a Black and White Youth Camp at the Tahora Stud in Christchurch in June, which focused on teaching 14 young people from around the country about rearing, stock selection, leading, handling and the presentation of both animal and handler for showing.

''We practised leading, and we got tips about clipping and nutrition,'' she said. 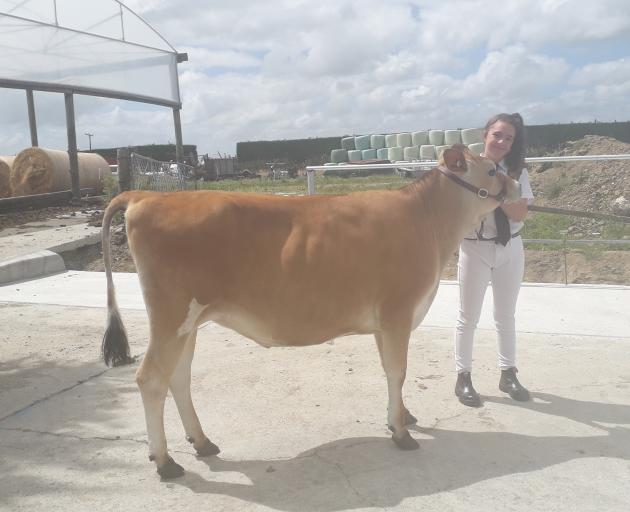 Kimberley Simmons, of Dacre, is a dairy cow enthusiast and is proud of her award-winning Brydale Windstar Sydney.
''We went out to the paddock and they showed us what to look for when picking a good animal for a show.''

She had yearling Tahora Octane Cookee for the week and used what she had been taught to present her as if for a show.

''They took our photos and I sent it to the competition.

''I thought it was pretty cool when I won as I didn't really expect it.''

''The highlight of this season was when we went to Australia for the International Dairy Week at Tatura, Victoria, in January,'' she said.

''It was my first time overseas, so it was pretty special.

''The temperature was 46degC.

She said 12 people, including eight youth, went to Australia, who were members of either the Otago Southland Milking Shorthorn Association or the Southland/Otago Jersey Breeders group.

''That was pretty cool and there were lots of really nice animals, including Brown Swiss, Ayrshire, Guernsey and Illawarra [Australia's version of milking shorthorns].

''It was interesting to see how the animals are over here and the different management practices.''

Kimberley has been showing calves since she was 4, and she and her family regularly and successfully attend shows in Otago and Southland and as far afield as Oamaru.

She also has cows of her own in the herd, including Brydale Windstar Sydney (also known as Sybil), which has won several awards.

When not at school or working with animals, she enjoys rifle shooting, social netball, coaching year 1 to 4 Future Fern netball players, badminton and Scouts.

She is a member of the Southland/Otago Jersey Breeders group and Otago Southland Milking Shorthorn Association, as well as Holstein Friesian New Zealand and Jersey New Zealand.