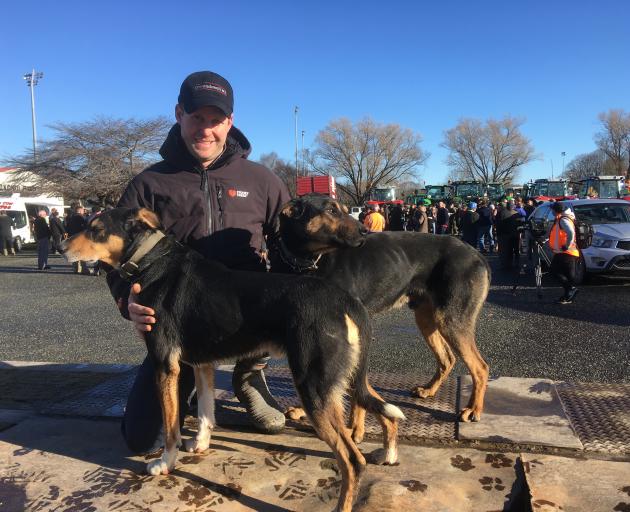 Logan Evans at the Groundswell protest in Gore. Photo: Shawn McAvinue
A Southland Groundswell New Zealand organiser will join a "flotilla" of anti-mandate protesters trying to make their way across Cook Strait.

But Gore farmer Logan Evans says he will be acting as an individual, as the rural protest group has decided it will not join those protesting in Wellington.

Mr Evans is leaving Bluff tomorrow morning, with his 5.2m boat in tow, heading for the anti-mandate protests in Wellington.

Undeterred by Cook Strait, Mr Evans plans to chug across the 22km stretch of water as part of a flotilla of anti-mandate protesters, in what he says could be a "Dunkirk-style" crossing.

Yesterday, Maritime New Zealand, alongside several other partner agencies, said it was closely monitoring plans by a group to cross from Picton to Wellington.

Deputy director safety and response systems Nigel Clifford said Cook Strait could be very dangerous and was not for the underprepared.

Mr Evans said he was taking part in his second Convoy 2022 NZ event and expected the crossing could be made on about Monday, weather permitting.

He expected those familiar with crossing the strait would "take us under their wing" — "I have no worries at all" — while he had heard talk that 30 boats were crossing from Wellington to accompany them.

Mr Evans — who was the Gore co-ordinator for the Groundswell New Zealand protests last year — stressed he was supporting the anti-mandate protest in a personal capacity and not as a Groundswell representative.

Yesterday, Groundswell New Zealand issued a statement saying it would not be taking part in the protests.

The rural group organised two major protests last year against what it describes as unworkable regulations being imposed by the Government that adversely affect farmers, growers and rural communities.

Mr Evans said Groundswell had never judged him for his personal opinion.

"I act as an individual and they’ve never judged me for that. Everyone else in the country can do the same."

Groundswell NZ co-founder Bryce McKenzie said the group had been "pulled in all directions" in recent days over the protest in Wellington.

"In response to suggestions that Groundswell NZ are going to Wellington, we can assure you this is not happening."

Although Groundswell had sympathy with those questioning mandates, it was not something the group was going to get involved in at this stage, Mr McKenzie said.

"I know many Groundswell NZ members are against mandates. Others aren’t. And that is OK. We come together and fight for what we all agree on — the overregulation and arrogance from the Government."

Groundswell was planning the next stages of what was going to be "a sustained campaign to push back on unworkable regulations impeding rural New Zealand".