(Main image) Anna Munro with dogs Gus and Rizzo on the Lake Heron Station autumn muster; clockwise from bottom left, wethers snake their way across a branch of the Rakaia River during the station’s spring muster; sheep string away around a face on the autumn muster; Nina Jaine counts out sheep; morning haze at Ardgour Station, near Tarras. PHOTOS: ANNA MUNRO
From singing and shepherding to photography and physiotherapy, Hawea woman Anna Munro has a diverse lifestyle. She talks to rural editor Sally Rae about her career and her desire to help tell the farming story.

Anna Munro used to think she would love to end up owning a farm.

Now she’s not so sure. After all, the Hawea woman has the best of both worlds, dividing her time between working on Ardgour Station, near Tarras, and as a physiotherapist in Wanaka.

It might seem an unusual combination but, for outdoors-loving Mrs Munro, it suits her down to the proverbial tee.

"I suppose it depends what you’re into. I think it’s perfect. I know I definitely still like having the people contact but man, I really look forward to getting out to the farm as well. Definitely at the moment, life is pretty awesome," she said.

Mrs Munro (34), nee Jaine, grew up in Mid Canterbury, initially on a sheep and beef farm Cren Lea at Carew - a "tiny little spot" with a church, school and a hall, before the family farm sold and they moved to Cravendale, a 485ha property in the foothills at Mt Somers.

Cren Lea was on the flats - in an area that was now virtually all converted to dairying - and a property with hills was "pretty awesome" to grow up on, she said.

Mrs Munro was the eldest of four. She has two sisters, Nina and Ailie, who now lease and farm Cravendale, and brother Robbie.

The four all helped out on the farm where their parents made it "really good fun". "I’ve got really positive memories of growing up," she said, quipping that her parents must have secretly disguised work as fun.

Nina and Ailie, in particular, were "just right into the farm" while Robbie made it clear farming was not something he saw himself doing in the future, although he loved the property.

Mrs Munro was largely kept busy with music and other creative outlets. While enjoying the farming lifestyle, she spent much of her time immersed in "music-y type stuff".

But Cravendale had always been a grounding place to go home to.

"I think, at heart, I definitely recharge when I’m alone. The farm has always been amazing for that, lots of space," she said.

Her parents encouraged the four siblings to do their own thing and broaden their horizons. Ailie trained as a nurse, Nina a vet and Robbie a doctor, while Mrs Munro studied physiotherapy. 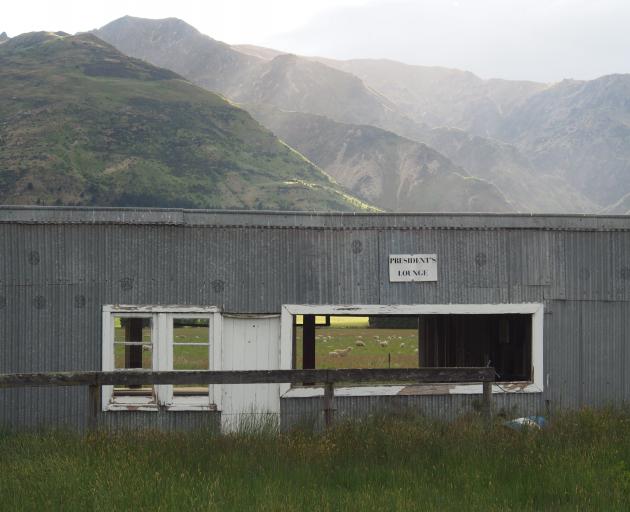 This image of the Hawea Picnic Racing Club’s president’s lounge has been selected as a finalist in the New Zealand Geographic Photographer of the Year competition. PHOTO: ANNA MUNRO
But before she settled on that as a career, she took a year off after leaving school and worked on farms in Ireland and Scotland. Having had enough of school, she wanted to "work it out" for herself.

She worked at an outdoor education centre in Scotland for people with special needs. There was a physiotherapist there and she decided that would be a "cool path to go down". Her mother was also a physiotherapist.

She spent three years at the University of Otago in Dunedin and spent her last year in Canterbury.

She worked as a physiotherapist in Gisborne before returning to Canterbury, having met her now husband Mitch, a builder, who grew up in Fairlie. There was also a stint in Wyoming working on a ranch.

The couple later decided to leave Christchurch, wanting to be somewhere "with a bit more of a community heart", and moved to Wanaka in 2016.

Mrs Munro knew she did not want to be doing physiotherapy full-time, despite it being an "awesome job".

"I love the people side of it and I love helping people. I was just missing being out in the open so I thought ... I’ll just see if I can go part-time farm and physio work."

She now spent Tuesdays and Wednesdays working at Ardgour Station and Mondays, Thursdays and Fridays at Central Lakes Physio in Wanaka. Over winter, weekends were split at the station.

Ardgour is a 3000ha merino sheep and beef property, owned by Bruce and Linda Jolly who have also diversified into grazing Wagyu cattle and developed a cherry operation in partnership with Hortinvest Ltd. It comprises extensive hill country and some irrigated land on the terraces.

Mr and Mrs Jolly had been "awesome" to work for, and Mrs Munro also enjoyed working alongside stock manager Warren Hewson.

Mr Hewson had dubbed her two working dogs Gus and Rizzo ["a real sassy little thing" who was named after the Grease character] Town Dog 1 and Town Dog 2, because they were pets when she was home in Hawea. "They live a very good life," she said.

Mrs Munro had never previously had her own working dogs, let alone trained one. She attended this year’s Tarras dog trials, saying one of her runs was a "complete shambles and the other one, I think, was a fluke".

"I’m no dog triallist, that’s for sure. I brought up the numbers, that was about all I was doing," she said. But on the farm, her dogs did everything she needed them to do.

Mrs Munro has developed a love of photography, a hobby which had "just fallen into place in a funny way".

Her husband had bought a camera - he loved hunting and wanted to take it to a wapiti block in Fiordland.

But he found it too heavy and she said she would take it on the Lake Heron Station’s annual autumn muster in the heart of the Canterbury high country, which the Jaine sisters regularly helped out on.

It was "just the best time", four days spent on foot, camping each night in a hut from which they headed out every day to bring the wethers down off the tops.

There was shingle scree and it was "bluffy" in places and there had been a few spills over the years.

Nina Jaine, whom she described as a "tough little bugger", took a tumble one day and the shingle had to be scraped from her legs at the medical centre.

Mrs Munro took photographs on the muster and quickly discovered that people loved seeing images of the high country. She also took part in Lake Heron’s one-day spring muster and that was also a scenic occasion.

She entered the Otago Merino Association’s photography competition and later thought perhaps she should do something with her photographs, showing people authentic rural life.

A photographer friend of Mrs Munro’s mother encouraged her to enter this year’s New Zealand Geographic Photographer of the Year awards for which public voting was now under way.

She dispatched a selection of mustering photographs but it was a "random shot" of the Hawea Picnic Racing Club president’s lounge that was selected as a finalist.

Her photographs could also be viewed both on Facebook and Instagram. She had recently also compiled a calendar of her images and had sold more than 200.

She was amazed to have received orders from all over the world, and some from people who used to muster at Lake Heron.

"I’m just trusting that some good will come from it [her photography]. It’s amazing how, if you trust something, pour your heart into it, good things happen from it," she said.

Mrs Munro admitted she got a "bee in her bonnet" when farmers complained about the supposed rural-urban divide.

There was always time to chat to clients with physiotherapy work and people were interested in what she did.

They were fascinated when they found out, some brought up connections they had with farming, others had no idea about the sector but it created discussion.

"I think if you’re trying to help the rural perceived divide, invite somebody from town to your farm and show them what it’s all about. Chances are they will love it and love to hear and see all about it," she said.

The rural sector did not just need hardy farmers; being able to communicate with people who were not involved in farming and might have different interests was also very important.

Music has continued to be a passion for Mrs Munro, who took her guitar on this year’s autumn muster and it was discovered that there was a lot of talent among the shepherds, with some good sing-a-longs.

She recently started a duo with Abbey Mackenzie and the pair will be performing at the Geraldine Summer Fete - held at Ms Mackenzie’s family home - on November 4.

There was also an "awesome little music scene" in Wanaka which she enjoyed - "a lot of wine drinking, actually. It’s wine and jam," she laughed.