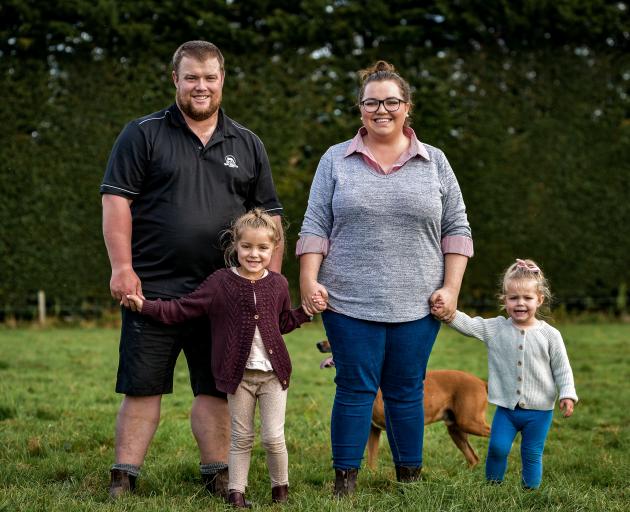 The proposal put him on a path to recovery and he subsequently won the 2021 Southland/Otago Dairy Manager of the Year title, $8700 in prizes and three merit awards.

"I’m proud, stoked and surprised — it was pretty cool considering I nearly lost my life six years ago."

In 2015, he was riding alone on a trail bike ride in Tokanui when the suspension on his bike malfunctioned and he fell about 15m down a cliff and landed on his head.

He regained consciousness and finished the ride with no memory of the fall.

When he removed his helmet, his forehead was covered with bruising.

"My head was as black as my shirt."

When he got home his wife Daniella noticed something was wrong and rushed him to hospital.

A CT scan revealed a bleed in his brain, but he was sent home the same day.

A few days later, he passed a concussion test and everything appeared fine.

However, a few weeks later, his wife asked him why he was not ready for a trip to town and he told her he was.

When she told him he was not wearing any pants, he rejected the fact, despite her telling the truth.

"Everything went downhill from there and I had a full mental breakdown."

Tests revealed he had damaged his frontal lobe — the front part of the brain responsible for higher cognitive functions including "memory, emotions, impulse control, and coping mechanisms you’ve built up since you were 2 years old".

"All of it went out the window."

He plunged into a "debilitating" depression and was fatigued, struggling to work and crippled by a relentless migraine.

He began to feel like a burden to his family.

His wife gave him an ultimatum — for the family to travel united on his road to recovery or for him to go it alone.

"She said ‘you pick and you pick now’ and that was it — a fork in the road and I could go left or right."

His "amazing" wife had picked the right time to lay down the challenge and he decided to take the united path.

After ACC declined his claim, he and his parents funded his $40,000 recovery, including working with neurologists and a counsellor.

When the idea of counselling was floated he "outright refused".

"I said ‘there’s no way, you’ll have to drag me in there’ — I was a typical Kiwi guy not wanting to talk about their feelings — but now I see him once a month and I look forward to it."

Counselling made him realise suicide would not relieve a burden from his family but would place one on them instead, he said.

His wife and two daughters Pippa (5) and Lucy (2) were the driving force in his life, he said.

“I want them to be proud of who I am and what I can provide for them.”

He encouraged anyone struggling to seek help.

“I owe my success to my family, my parents and my specialist in Dunedin. Going through that experience definitely allows me to be a better boss to my staff, as I know the importance of looking after yourself.”

He is in his second season as the farm manager for Shane and Vicki Murphy, milking 750 cows on their 270ha farm in South Hillend, where he would contract milk from June 1.

One of his proudest achievements was a record production in his first year managing.

“I know this result has led to my contract milking role.”

The 30-year-old said he and his wife once had a goal of owning their own farm by the time he turned 40, but after the accident, they had dropped the objective.

"We are happy to see where life takes us — we want to enjoy our kids and each other — farm ownership is not the be-all and end-all. There are other avenues of wealth creation besides that."

An important part of his management style was open communication and providing support to his three staff.

"I enjoy helping people and watching them progress and grow."

Before the accident, when he had a stressful day on the farm, he used to unwind by riding his trail bike.

As he sold his bike after the accident, he now unwinds by clay target shooting at a range in Oreti Beach most Tuesday nights.

To help himself and his staff achieve a work-life balance, he is signing up for an inter-farm paintball competition.

Staff and their families were also invited for regular cooked breakfasts and pot luck dinners.

"We sit around and talk about anything but farming."

He planned to attend the Dairy Industry Awards dinner in Hamilton on May 15.

If he did not win the national manager title there would be "no regrets".

"I just take every day as it comes."