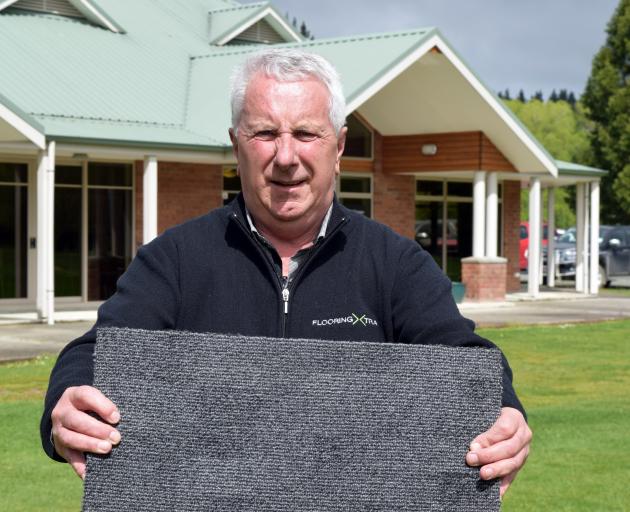 Alexandra and Cromwell Flooring Xtra owner Paul Rillstone shows a carpet tile at a roadshow about the proposed merger of Wools of New Zealand and Primary Wool Co-operative at Lawrence Golf Club last week. PHOTO: SHAWN MCAVINUE
The tide is turning for the sales of woollen carpet, a Southern retailer says.

A national roadshow about a proposed merger between Wools of New Zealand and Primary Wool Co-operative made its final stops in the South last week.

The companies have been getting New Zealand strong wool from its shareholding farmers made into carpet in Turkey, which had been on sale at Flooring Xtra shops in New Zealand for a couple of months.

About a year ago, about two-thirds of the more than 120 carpet options in his shops were made from synthetic materials.

Then, synthetic carpet accounted for more than 80% of sales.

Now more than half of the carpets on offer in his shops were made from wool and accounted for 67% of sales.

He expected wool carpet would account for 75% of sales by Christmas and hoped it would reach 80% by March next year.

Shoppers were interested in wool carpet, something which was not on their radar a year ago.

Flooring Xtra accounted for about 60% of the carpet market in New Zealand, Mr Rillstone said.

Primary Wool Co-operative chairman Richard Young said the partnership built with Flooring Xtra to get the carpets in the market and move the strategy of the proposal forward was ‘‘integral in its success’’.