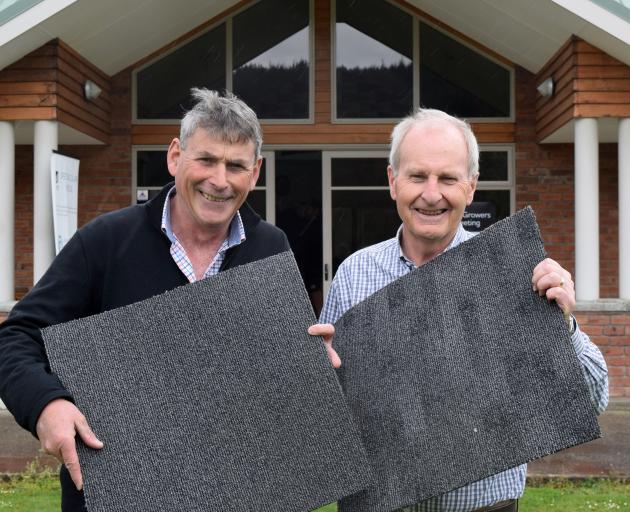 Exhibiting wool carpet tiles before speaking at a roadshow stop at Lawrence Golf Club last week are Primary Wool Co-operative chairman Richard Young (left) and Wools of New Zealand chief executive John McWhirter. PHOTO: SHAWN MCAVINUE
Voting packs on a proposed merger of Wools of New Zealand and Primary Wool Co-operative have been posted to more than 2000 farmers this week. Reporter Shawn McAvinue joins farmers at a stop of a nationwide roadshow where executives spoke about their plans to more than double the price for strong wool in the next three years by competing with synthetic carpet on price.

The strong wool industry is ‘‘broken’’ and two companies must merge to lift prices for farmers, company directors say.

A national roadshow about a proposed merger between Wools of New Zealand and Primary Wool Co-operative made its final six stops in the South last week. 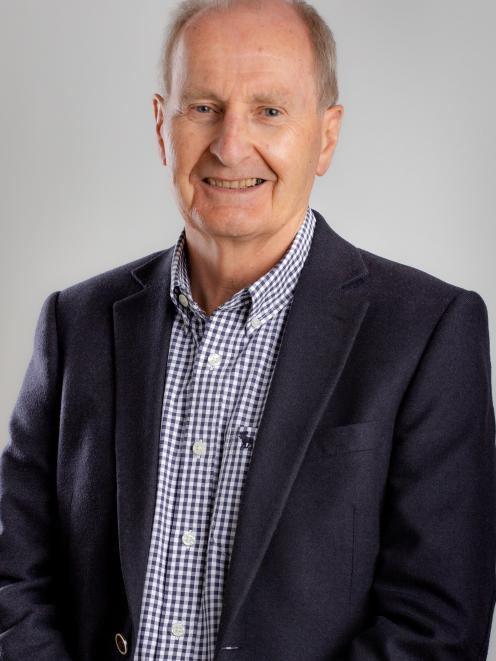 The roadshow stopped in Mossburn and Invercargill on Monday, Balclutha and Gore on Tuesday and Lawrence and Palmerston on Wednesday.

More than 40 farmers attended the second-to-last stop on the national roadshow at Lawrence Golf Club.

Mr Young said a merger, using the recognised Wools of New Zealand brand, would change the game and demand a good price for wool.

‘‘We’ve got to give you the confidence we’ve got a plan to try and lift the price of wool because we need two income streams off sheep — to keep the pine trees off the country and to keep our rural communities vibrant — so it’s hugely important that this comes off.’’

The companies traded 37% of the wool clip in New Zealand and wanted to increase its share to 50%.

‘‘We just need to get the vote over the line and get on with it.’’

Mr McWhirter started his speech by asking anyone to stand if they were happy with the price for strong wool.

Mr McWhirter said he could understand why farmers wanted more than $2 a kilogram.

The volume of strong wool being produced had been dropping for decades, but demand for the wool was falling at a faster rate.

That combination was causing a surplus of stock, reducing the price.

About 10,000 farmers were growing wool for about 10 companies to buy at auction on behalf of international spinners.

Mr McWhirter wanted to solve the problem faced by the strong wool industry by creating in the wool market the same dynamic as the current housing market was governed by, in which there was ‘‘buyer tension’’ because of supply not meeting demand. 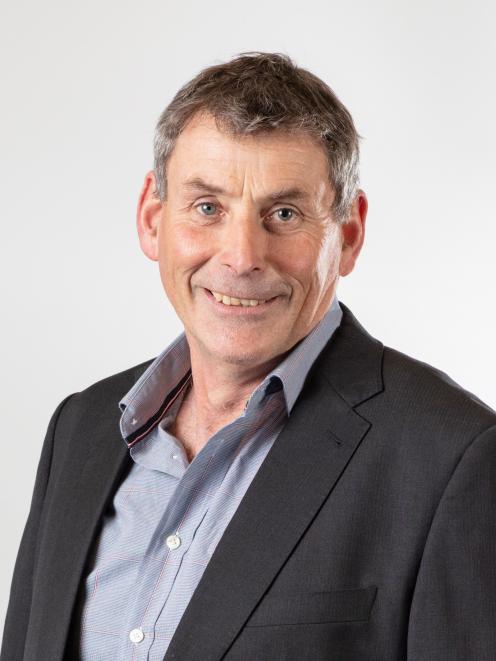 Primary Wool Co-operative chairman Richard Young
The rest, (about 43,000 bales) was oversupply and there was no buyer.

A plan had been devised to sell the bales unsold in 2019 to increase demand and lift prices, Mr McWhirter said.

The elimination of the oversupply would create buyer tension, where companies would need to secure contracts for wool, rather than try their luck at auction, because of concerns they might not be able to secure enough wool to continue a desired level of production.

Another issue for the industry was its long supply chain, in which multiple parties — brokers, exporters, importers, spinners, manufacturers and retailers — each added margins.

‘‘Everybody is clipping the ticket.’’

As a result, a final wool product such as carpet was expensive for consumers and could not compete on price with ‘‘plastic’’ carpets.

A merger would solve the problem by creating a more efficient supply chain.

For example, in one case a farmer’s wool went to Wools of New Zealand, was shipped to Zenova Carpet in southern Turkey to be made into carpeting and then shipped back to New Zealand for retailer Flooring Xtra to sell.

‘‘A more efficient supply chain takes a massive amount of cost out of it and we are also in control of it.’’

The carpet had been on sale at Flooring Xtra for a couple of months.

Also, a 100% wool carpet range was the same price as a solution-dyed nylon carpet at Flooring Xtra.

Wools of New Zealand also had a carpet containing 80% wool to provide a cheaper product for the building market.

Wools of New Zealand had nine carpet ranges and each range had five colours.

The ranges and colours were named after farms of suppliers.

Mr McWhirter expected a wool carpet price war, which would benefit the industry because it would mean more wool was sold.

‘‘It’s a very unique situation, where a competitor attacks you and tries to knock you out, when they are enhancing the problem you are trying to solve.’’

Carpet orders had been taken in the United Kingdom, and markets were being explored in Australia and the United States.

The long-term forecast was for 90% of carpet sales to be in the United Kingdom and United States, so manufacturing in Turkey would reduce shipping costs.

By being able to sell wool carpet cheaper, they could get more of the market share.

If wool carpet had a 50% share of the market, carpet manufacturers would need another 55,000 bales — 10,000 more than the current surplus.

The wholesale market for carpet in New Zealand was now worth more than $250million. Solution-dyed nylon accounted for $140million, polypropylene $60million and wool $60million.

Wools of New Zealand had no intention of competing against cheaper polypropylene carpet because it was a product which needed replacing decades earlier than wool carpet.

The goal was for wool to take $70million of the sales of solution-dyed nylon carpet by 2025, boosting the market share for wool carpet to 50% or $130million.

Wools of New Zealand wanted a $50million share of the $70million of growth of the wool market by 2025.

‘‘That’s what we are chasing and it’s realistic — you’re not going to get it all.’’

The business model was based on farmers getting $5 per kg by 2025, if not earlier.

As the 2025 model would need another 55,000 bales, more wool would be needed than was currently on the market.

A farmer asked if the quality of wool available on the market was suitable for making carpet because farmers had been selecting sheep for meat, rather than wool.

Mr McWhirter said there was enough good-quality wool available at the moment but as prices rose he expected farmers to improve the quality of the wool and increase flock sizes.

‘‘I expect sheep numbers to rise.’’

Carpet was the focus because no-one had found a new use for strong wool in the past 20 years.

More than half of strong wool currently produced was made into floor coverings, such as carpet.

If a business wanted to change fast, it must ‘‘attack’’ in the biggest existing product category as it offered the greatest opportunity.

Other opportunities for strong wool could be explored in future but for now a single focus was wanted, with a disciplined approach, on a proven product — carpet.

‘‘There might be other opportunities — let’s just do one and get it right,’’ he said.

The merged companies would increase the demand for wool using a viable, commercial business model, which would endure over time.

As the model was self-funding, shareholders would stop being asked for money when the companies were ‘‘bleeding’’ financially.

‘‘The business is not a charity — we don’t have charitable status — we have to make money so we can invest in the future, tell the story of wool and drive demand for it.’’

Voting packs were posted on Monday.