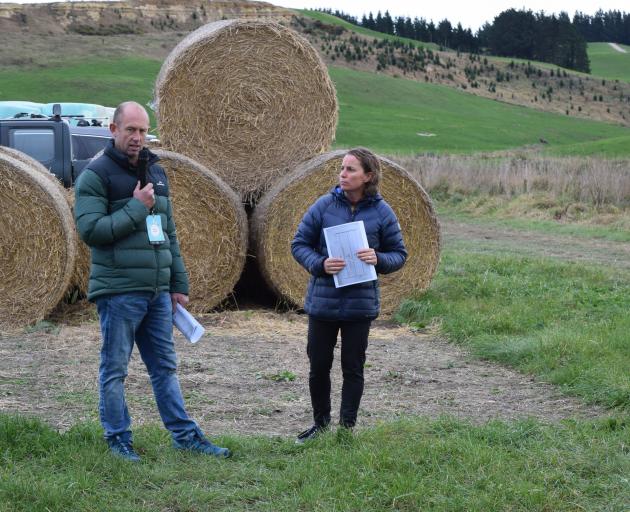 Windsor Park Dairies owner Callum and Twyla Kingan share details on their winter cropping and grazing plans at a South Island Dairy Event workshop on their farm in North Otago last week. PHOTO: SHAWN MCAVINUE
Putting down on paper a considered plan for grazing dairy cows on crops grown on a hilly paddock on a North Otago farm will make it easier to get a consent to continue doing it next winter, a farmer says.

Dairy farmers Callum and Twyla Kingan own and run Windsor Park at Enfield, inland from Oamaru.

Up to 800 of their cows get wintered on the run-off.

The couple shared one of their winter cropping and grazing plans to about 60 people visiting the run-off on a South Island Dairy Event workshop last week.

The plan was for a paddock known as Far Hill.

He was usually a bit "gun shy" to winter graze on the paddock because parts of it included a 25degree slope but despite that, he thought he would give it a go.

Since the new Essential Freshwater regulations do not come into force until November 1 this year, he thought he would give it a go this winter.

He was more relaxed about winter grazing on Far Hill, he explained, because it was usually dry two days after heavy rainfall.

Pooled water remained longer on flatter parts of the farm, he said.

He had been talking to the Otago Regional Council about obtaining a consent to continue to graze cattle in the Farm Hill paddock during future winters under the new rules.

"My perspective is, we can still winter graze on it, we just need a consent."

Winter crop grazing was a big part of his operation, he said.

Farmers could get a consent by implementing good winter grazing management, including fencing off critical source areas.

Winter cropping and grazing plans had been part of the farm operation for the past five years.

The plans were practical and simple and were considered an annual administrative task on the farm.

If an compliance officer called, the plan could be given to them to show how they had thought about ways to reduce any environmental impacts when the weather turned for the worse.

The plan must be put on paper and understood by staff.

Staff knowing the plan gave them confidence at times they were outside the district.

"We incorporate our staff in everything we do because they do most of the work — having plans like this is valuable to talk about and they are key for working out our Plan Bs and Plan Cs."

Part of the plan was having a "stash of straw" to feed the cattle early during an adverse weather event, rather than waiting.

Seven paddocks on the farm were planted in fodder beet.

Fodder beet had been the growth area for the business group for the past six years.

"We saw there was a gap in the market."

The group managed up to 25% of the market share, equating to about 9500ha of fodder beet across New Zealand.

"We see fodder beet as an integral part of the winter grazing system."

His favourite type of fodder beet to use in North Otago was the Agricom varieties Bangor, followed by Feldherr. 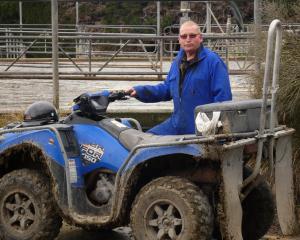