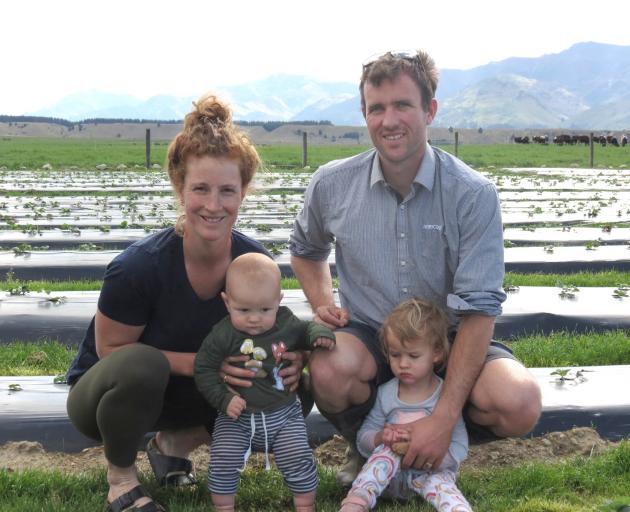 Rebecca and Ben Trotter with son Edward (8 months) and daughter Florence (2) in the middle of their strawberry patch near Luggate. The first harvest is expected next month. Photo: Jared Morgan
From bulls to berries — they are polar opposites but Ben and Rebecca Trotter are hoping they attract.

For the past three years, the couple have farmed 135ha at the junction of State Highways 6 and 8A at Luggate 11km from Wanaka.

Their focus, until now, has been farming Friesian bulls, while working their day jobs — Mr Trotter specialising in grass seed as South Island manager for Agricom, Mrs Trotter as a lower South Island territory agribusiness manager for Genesis Energy.

Added to the mix are the couple’s two children, Florence (2) and Edward (8 months).

The arrival of their son means Mrs Trotter is on maternity leave but she has juggled their expanding family with a pivot — to dedicate 1ha of their property to strawberries.

Almost a year in the making and at a considerable financial outlay, Red Bridge Berries, named after the Luggate Bridge, was born with the first harvest of strawberries expected next month in time for the silly — and peak berry — season.

The idea behind the venture is simple.

The strawberry patch will be open for people to pick their own strawberries from late spring through to mid-autumn.

Mrs Trotter said the idea was to provide a ‘‘fun family outing’’.

‘‘When you look at Wanaka there’s the lakes, the lavender farm and Puzzling World, so this is another attraction for families.’’

She had also seen the formula work elsewhere, including in her home region.

‘‘There’s a lot of pick-your-own-strawberry farms in the Bay of Plenty and I have good memories of picking your own strawberries as a kid.’’

And that could be complemented with real-fruit ice cream from a caravan they are setting up.

The couple also believed they had found the perfect variety of strawberry to match the Upper Clutha climate. ‘‘They [strawberries] like a dry climate with cold winters and hot summers, so we settled on a day-neutral variety.’’ Day-neutral strawberries continue to set and ripen fruit all summer long until a hard frost puts them into dormancy.

Day-neutral refers to the light sensitivity of the variety and day-neutral strawberries will blossom and set fruit no matter how long or short the days are.
The variety bore fruit typically from late October to mid-November, she said.

‘‘We are hoping to replicate that here.’’

At the peak of the season the couple anticipated employing three staff on the ground to keep things running smoothly.

Mr Trotter said the climate in which they were growing was also low-disease pressure, which meant the use of chemical intervention was minimal and they were adopting an integrated pest-management strategy which involved monitoring for diseases and when pests were present.

There was also scope to work with other small-scale producers in the region — that included Tiaki Bees which would site hives at the strawberry patch to pollinate the flowers, Mrs Trotter said.

‘‘There a lot of other smaller businesses we can tap into in the region and supply strawberries to.

‘‘It is really chance to showcase what other people are doing in the region.’’

While she and her husband both come from farming backgrounds — hers a dairy farm in the Bay of Plenty and his a sheep and beef farm in Southland — branching out into horticulture was a bit of a leap but it is a swivel the couple are used to.

This time it is by design, but for Mr Trotter the return to the Wanaka area was one of necessity, he said.

His brother, Andre Trotter, was killed in a single-vehicle crash at Momona, near Dunedin Airport, in February 2016 aged 25.

In the aftermath, family came first for Mr Trotter and he made the decision to move from the Waikato to be closer to his parents, Pauline and John, who were then living in Wanaka, having moved from South Canterbury.

The Wanaka area had always been a focus for the family.

Mrs Trotter, then Miss Law, was part of the deal but the move was a natural progression.

The couple bought the land in a partnership with Mr Trotter’s parents and married in 2018 and Florence followed, Mrs Trotter said.

‘‘We got married and had a baby all in the space of a year.’’

Add son Edward to the mix, as well as the labour-intensive strawberries, and it is fair to say the couple have a lot on their (dessert) plate but they are taking it in their stride.