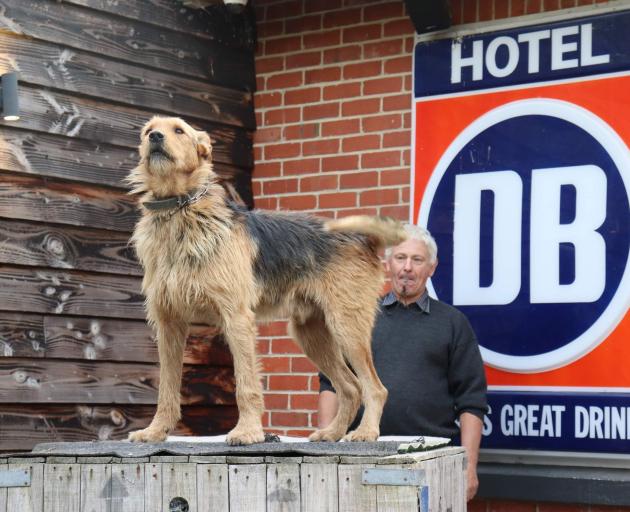 David Robertson begins the canine competition with a bang, or rather a bark, with his dog,Crew, at the Beaumont Bark Up at the Beaumont Hotel. PHOTO: SUPPLIED
Mental health is a continuing issue for the rural sector, and what better way than a traditional bark up to both combat the strains of farm life, and do its bit to bring the issue to wider attention through its supportive fundraising efforts. Reporter Evelyn Thorn whiled away a couple of hours at the second annual Beaumont Bark Up recently, and talked to organiser Jana Fransbach to find out why she is supporting a cause close to her heart.

This year marked the second Beaumont Bark Up, where dogs from just down the road, to as far afield as Owaka, travelled to put their best bark forward and compete for prizes.

Organised by Beaumont Hotel bar manager and local shepherd Jana Fransbach, the event was held not only to bring local farmers and shepherds together to the hotel for some laughs and fun, but also to raise funds for rural wellbeing charity Farmstrong.

Proceeds from the evening, including a modest, $10 entry fee, went to Farmstrong, a national programme dedicated to supporting mental health within the community of all New Zealand farmers.

Ms Fransbach said she was in regular contact with Farmstrong during the preparation for the Bark Up.

‘‘They’ve been so supportive, and have even donated some of the prizes for the winners in advance; it’s been great to help out in our small way.’’

Statistics indicate that suicide is six times more prevalent in young rural men than in the general New Zealand population. Difficulties with mental health are an issue that persists among rural farmers, and Farmstrong aims to assist as many people as it can.

Farmstrong’s website highlights ‘‘burnout’’ as a major challenge for farmers and other rural workers. 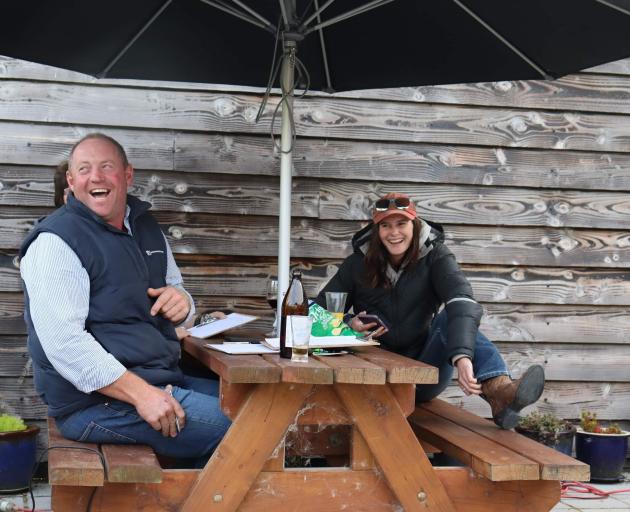 Beaumont Bark Up judges Paul Eason (left) and Amy Morris laugh along to the entertainment of organiser David Robertson as they judge the line-up of dogs that produced their best woof at the Beaumont Hotel. Photo: Supplied

‘‘Month after month of badly managed stress can eventually result in burnout. Burnout sneaks up on you over time, like a slow leak. It’s characterised by physical and emotional exhaustion, cynicism, detachment and feelings of ineffectiveness,’’ the organisation says.

Ms Fransbach said, like many rural people, she had friends and acquaintances who had experienced burnout.

“Everyone knows someone that has had a burnout before,” Ms Fransbach, who originates from Germany, said.

“It is very isolated in rural areas compared to urban towns, as there is a contrast between the two. Access to facilities sometimes aren’t as easy to get to when you’re living on a farm, so it is important that Farmstrong is a service available and is dedicated to assisting the people in those rural areas.’’

She said she could see a “turn” happening in rural areas, where more people were beginning to reach out and seek assistance in regards to mental health issues.

Events like the bark up, now in its second year, were one way to offset some of the stress and isolation rural people could sometimes experience.

‘‘People have a lot to talk about when talking about their dogs. They are a good way to bring rural people together to bond.’’

Last year’s inaugural Beaumont Bark Up attracted more than 40 entries, and was deemed a success by Ms Fransbach.

This year the Omicron upsurge forced the event to be kept ‘‘moderately under wraps’’, making it perhaps less competitive and more casual, she said.

‘‘This year saw only around 20 entries who were entered both on the night and in advance, due to Covid-19 Red Light setting restrictions for our venue, the Beaumont Hotel.’’

Beaumont Bark Up contestants made it a fun, casual night by teaming their dogs up to bark together towards the end of the night as a classic battle off between the shepherd’s canines. Photo: Supplied

Last year’s judges used a smartphone decibel reader to assess bark volumes within the 15-second time each hound was allocated to perform, but it was not used for this year’s event to keep the night as informal as possible.

The dogs were called out by the judges one at a time, and each made their way alongside their owner to a large crate where they would stand tall and debut their barks.

The dogs were then ordered by their owner to begin, and words like “Stand!”, “Away!” and “Speak!” were the top three calls for the dogs to initiate their bark. A timer sounded at 15 seconds, and they were called to cease barking by the judges.

More than a few dogs carried on just as if they were back in the paddock chasing stock.

Huntaways remained the most well represented breed in the competition, and performed alongside a couple of heading dogs.

A doughty Jack Russell also tried its luck to out-bark the rest of its competitors. The dog with the most outstanding, loudest, non-stop barks was David Robertson’s huntaway Crew, who set an ear-splitting standard for the rest.

As the night played out, some brave, two-legged humans also tried their best at giving the crowd their own rendition of a bark — a tradition usually reserved for ‘‘soaking’’, when a dog gets stage-fright and refuses to bark. Prizes, including a “Shepherd Survivor’s Box”, were allocated to the “best of the best” of the hounds.

Ms Fransbach said she hoped to hold the event again next year, enshrining the bark up as a loud, proud Beaumont tradition.