Central Southland Pony Club president Penny Frew (left) walks through the cross-country course with club rider Sophie Sinclair during the annual Springston Trophy last week at Mrs Frew’s Ryal Bush farm. PHOTOS: KAREN PASCO
When the opportunity arose for Penny Frew to buy a piece of land right next to her and husband Brendon’s beef finishing farm, she jumped at it.

She knew exactly what she would do with it — turn it into the Ryal Bush Event Centre.

‘‘It was a great location, it ticked all the boxes and Eventing Southland were going through a process of losing a couple of venues with farm changes, so I jumped on board.’’

Frew has evented since the age of 9 and caught ‘‘the bug’’ after travelling to different events.

‘‘Eventing has always been my thing.’’

Earlier this month, it was the turn of riders throughout the South Island to come to her place, as the Central Southland Pony Club, of which Frew is president, hosted the Springston Trophy on her patch.

The eventing competition involves age group riders selected to represent their pony clubs. There were 22 teams, with each having four to six riders competing in the disciplines of dressage, cross-country and showjumping.

The Frew farm at Ryal Bush near Invercargill was transformed into the Ryal Bush Event Centre for the Springston Trophy earlier this month. Photo: Karen Pasco

For Frew it seems there is an extra obligation because they are coming to ‘‘her place’’.

‘‘You welcome people into your home and this is what that feels like. You’re welcoming people here and you want to do your best and be a good host.’’

But with the responsibility comes anxiety.

Frew was getting only about three to four hours’ sleep a night and with the stress struggled to eat much.

The trophy was supposed to have been held in 2020 at the centre, but Covid-19 put a stop to that and was delayed for a year.

The postponement, while giving the organising committee another year, was also a bit fraught.

‘‘Yes, we’ve had another year of planning but it’s actually been a really confusing year. You just don’t know whether you’re coming or going.’’

Given the current Covid-19 situation, she said she would not rest easy until the final riders had finished the showjumping section on the Sunday. 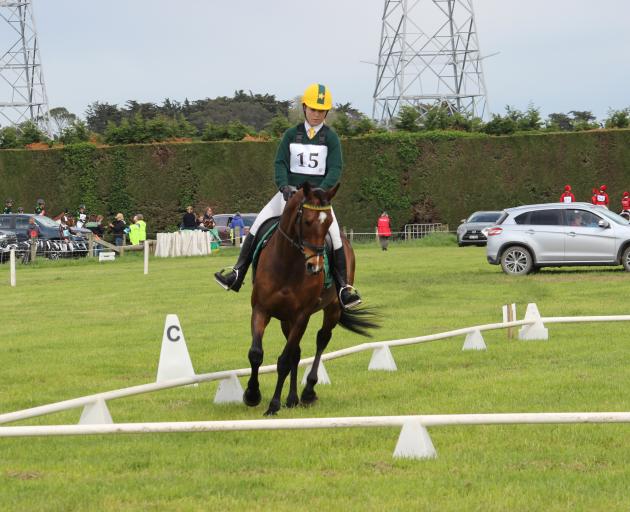 The eventing competition involves age group riders selected to represent their pony clubs. There were 22 teams, with each having four to six riders competing in the disciplines of dressage, cross-country and showjumping. Photo: Karen Pasco
The transformation of the paddocks, which usually house beef cattle, has been a family affair. Three kilometres of the farm had been developed into a cross-country course — some newly developed for the trophy.

‘‘There’s some really awesome stuff which is a brand new area that we’ve got which goes up through the trees.

‘‘We’ve hidden it for quite some time, and I’ve always known it was there, and it’s super cool to cut the trees.

‘‘The people that have evented here in the past, one of them said to me [when they saw it for the first time], ‘Oh my God’ and I said yes, we had the trees covering it so no-one knew.’’

It’s not just Frew though. She has the help of her family. Dad John Carmichael is also a cross-country designer and builder, and husband Brendon fully supports what she does, despite him not really having a choice, she says.

All of it comes at a cost.

Frew aid she couldn’t calculate the hours, days and weeks spent developing and maintaining the course as well as the cost to the farm of clearing paddocks for the event. ‘‘My stock all left the farm, I’ve only got a few calves here. ‘‘I’ve had to pay to truck them away, pay to graze them somewhere else, and pay to truck them in again.

‘‘How bad a business decision is that?’’ For Frew the joy of holding Springston Trophy was all about seeing the smile on young faces as they competed. One of those smiles was from her daughter Amelia (10), riding in the the trophy for the first time.

‘‘Someone said to me before we took on the task of hosting, that always when you’re coming to grief and having niggles within your committee just take one step back and say it’s for the kids.’’

She said the organising committee of the Central Southland Pony Club had become tighter now as a result of using the adage.

‘‘I couldn’t thank them enough for what they’ve stepped up and done.’’

The wider community, too, had quickly come to the fore when she needed a job done.

Their response was indicative of the Southland spirit.

‘‘The grass bolted in the last week. We had tractors here and they were mowing this and the choppers came in and the grass was gone.’’

When officials said they also wanted another section done, the same people came back to help again.

‘‘That’s a Southland thing. That’s what we will do for people and that’s why we love living here.’’