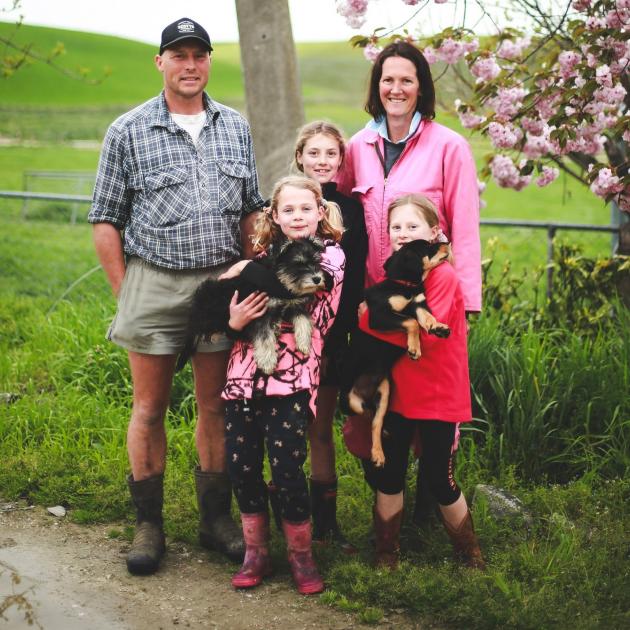 In June this year, Hayden and Robyn Williams moved into their own house for the first time.

After working in the dairy industry for 20 years, progressing to full farm ownership and moving into their own house was a big moment for the North Otago couple.

When Mr and Mrs Williams moved to North Otago to take up a 50:50 sharemilking job on Chris and Kay Dennison’s Hilderthorpe farm, they owned 80 cows, their cars had more than 300,000km on the clock and they had $10,000 in the bank.

Thirteen seasons later, they own their own 260ha farm at Five Forks, with 660 cows, lease a 280ha farm in Ardgowan and are still sharemilking at Hilderthorpe, with 800 cows and a team of five ‘‘fantastic’’ staff.

‘‘That tells you what sort of ride it’s been with Chris and Kay,’’ Mr Williams said.

Mrs Williams grew up in Southland and Otago, and her parents were sheep and beef farmers.

‘‘Growing up as a kid on a farm was just the best lifestyle — I just have such fond memories of that,’’ she said.

Hayden and Robyn Williams’ Five Forks dairy farm. PHOTO: REBECCA RYAN
But she never thought about pursuing dairy farming as a career until her 20s.

‘‘I went overseas and worked on a dairy farm and that’s where my dairying career started — in Ireland.

When she returned to New Zealand, she enrolled in a Primary ITO course in Ashburton, where she met her husband-to-be in 2003.

Mr Williams, who grew up on the West Coast, had always enjoyed the outdoors, but did not have the same rural upbringing.

His mother was a nurse, and his father worked as a truck driver and helicopter engineer.

After leaving school, he worked as a furniture maker for about eight years, including a stint in London.

‘‘It was a really good job, working with some good people and building high-end furniture.’’

When he returned to New Zealand, he got a job as a welder in Ashburton, building cow sheds. It was that job that introduced him to farming, and he applied for a job on one of the farms he built a cow shed on.

He liked the options and variety he saw in farming — the outdoors, the animals and the pasture. 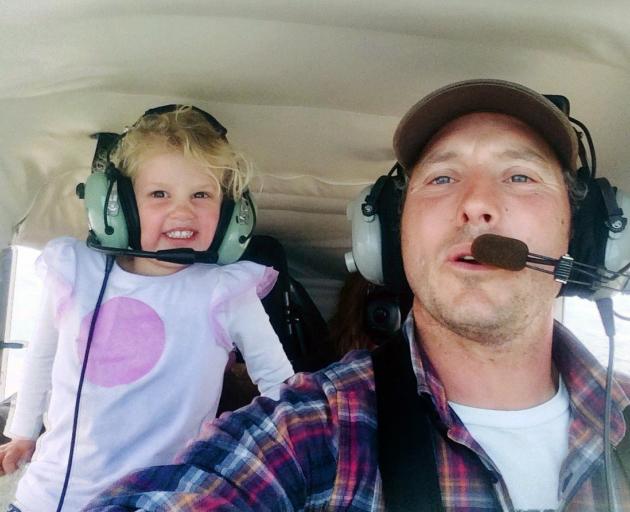 Hayden Williams’ escape from the farm often comes in the form of flying. PHOTO: SUPPLIED
‘‘I just wanted to have a job that required a certain level of fitness. I love getting out and getting my hands dirty, but I love the variety as well. I love how you can apply some smarts and science and all that sort of stuff, so it had quite a lot going for it in that respect.

‘‘And just as I got talking to people it seemed like it was a pathway to making a good income, which would support the lifestyle that I wanted to live.’’

In 2006, Mr and Mrs Williams moved to a dairy farm in Darfield, then spent a year managing a farm in Mount Somers, before meeting Mr and Mrs Dennison and moving to their Hilderthorpe farm, where they started 50:50 sharemilking.

‘‘We’re in season 13 with them now,’’ Mr Williams said. ‘‘It’s been a really good relationship — they’re great people’’ They bought their own farm in 2014, and converted it from dryland to dairy. It is now into its fourth season as a dairy farm, and Mr and Mrs Williams employ three full-time staff to help run it.

‘‘We saw this farm had that potential that we could develop it, you know, cost-effectively to, you know, just keep growing our wealth that way.’’

Five Forks was a great area — and the farm ticked every box, Mrs Williams said.

‘‘And it’s turned out to be that way.’’ While the Government was setting environmental goals for farmers, the couple were one step ahead, Mr Williams said.

‘‘We naturally go towards that anyway.

‘‘We’re proud Kiwis who just want to have a really good farm that does tick all the boxes.’’ Ultimately, they wanted it to look like a park, or a high-country station.

‘‘Now we’ve got the farm really functional, we’re getting the efficiencies of the farm set, it allows us more time to really focus on getting into that,’’ he said.

They had set aside an area of the farm to plant in beech forest, and planned to start their own nursery on the farm to help get the trees started.

‘‘We really enjoy that, you know — you can only milk cows for so many years of your life before you get sick of doing the same thing.’’

The couple said their knowledge base from studying — Mrs Williams studied commerce at Lincoln University and Mrs Williams business management
— and learning from some ‘‘really good employers’’ had helped set them up for success.

They were also prepared to put in the hard yards.

‘‘We say we’re lucky, but really we find the harder we work the luckier we get,’’ he said.

They started sharemilking on the back of the global financial crisis — and it was definitely a risk, they said.

‘‘Our banker backed us with some ridiculous equity rate — and he just trusted in us because of our knowledge that we’d built and we proved to him, time and time again, we could do it,’’ Mr Williams said.

They also took a risk buying their Five Forks farm — it was bigger than they could realistically afford at the time.

Then the dairy payout went down.

‘‘We probably took a step back and said ‘s… what have we done? Are we about to lose our farm?’ But we didn’t. We got through that low period,’’ Mr Williams said.

The key to their success was surrounding themselves with good people — and North Otago was not short of those. They were also not afraid to ask for help if they needed it.

‘‘We found people who were successful farmers, and a generation or two ahead of us, and sat down with them, asked them questions, and you walk away realising you can do this.’’

It was important to recognise that sometimes they were just going to make survival gains, and they just had to hang on.

‘‘And that’s good enough — to hang on. That put me in such a good headspace having those old boys around,’’ Mr Williams said.

At the same time, they had been raising a young family — Ruby (10) and twins Nadia and Imogen (8) — and after a pretty ‘‘full-on’’ few years, they were looking forward to spending more time with them off the farm.

‘‘For the first time in a long time, we are finding that we do have a bit more time,’’ he said. ‘‘Now it’s a really good opportunity for us to focus on the family.

‘‘You never seem to have enough money to set things up the way you need them set up. You just do what you have to do. But we’re at the point now we’ve decided to put life first a little bit,’’ Mr Williams said.

Their escape from the farm often came in the form of sport or flying.

Mr Williams is a pilot, the vice-president of the North Otago Aero Club and has shares in his own plane. He loves exploring New Zealand by air.

‘‘It just offers you some pretty cool opportunities, I think. And the people you meet flying — some of the best people you will ever meet.’’

He was also a keen surfer, and a passionate supporter of the Surfing for Farmers initiative that launched in Kakanui last year, which aimed to bring farmers together, off-farm and into the surf to enhance wellbeing.

Mrs Williams has represented Mid Canterbury in netball, and played for Papakaio and Athletic Maroon in more recent years.

‘‘I love netball. My mum was quite a good netballer, but she gave up too early. I want to keep going with my sport and stuff as long as I can,’’ she said.

They are both keen multisport athletes and mountain bikers.

The rural sector was facing its fair share of challenges, and it was easy to become overwhelmed by it all, they said.

But they were focused on controlling the controllables, their goals and their ‘‘why’’.

‘‘It’s all about how strong your ‘why’ is. If you’ve got a strong why, you’ll follow through. If you don’t have a strong why, then you need to go and investigate that a bit more,’’ Mr Williams said.

‘‘We’re in control of what we see and hear and if we’re not liking it, then we need to perhaps turn the telly off or do something different, you know.

‘‘We’ve got to turn off the negative information that we’re getting . . . and realise we still live in a really, really magnificent country that can produce food really efficiently and cost-effectively, and eventually things are going to come right.’’