A nationwide initiative supporting farmers’ mental and physical health was a roaring success in its first season at Kaka Point in South Otago.

Surfing For Farmers (SFF) was launched in Gisborne in 2018 by Stephen Thomson after seeing how pressure on the rural sector was hurting farmers at an alarming rate.

The programme now operates at 18 beaches throughout New Zealand.

‘‘As much as we love this industry, the stress of the job can get on top of you.

Hamish Brown stands tall as all ages get together off the land. Photo: Paul Richardson

‘‘Started by farmers, for farmers, it’s an opportunity to step away from what can be an all-consuming business, get fresh air, exercise and interact with other farmers, families and industry professionals . . . It’s not about being a gun surfer, it’s about having a laugh and washing the dirt off with a bit of salt water, topped off with a good old-fashioned Kiwi barbecue,” its website says.

The programme runs over the three summer months on weekday evenings at regional surf beaches, with boards, wetsuits, professional instructors and the post-workout barbecue covered by sponsors well known in the farming business.

With everything pre-organised and the groove as laid-back as possible, all a farmer has to do is show up, which is probably why about 30-50 of them suit up at Kaka Point at 5.30pm every Wednesday, rain or shine to get amongst the surf. 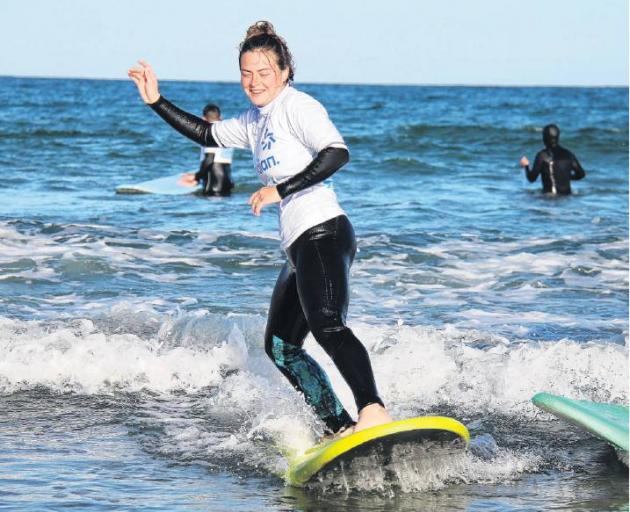 ‘‘Week on week we’re seeing more and more of us in the water.’’

Wetsuited figures were popping up constantly for a couple of hours as the crew found their waves and practised longer and longer rides, feeling the flow and applying the advice of their instructors from the Esplanade Surf School, Dunedin.

‘‘I explain the basics but the way to learn is doing, so a big part for me is just keeping eyes on. The closer the waves are the harder the work, but they’re up to it. This lot are grafters, they’re courageous, gutsy and fun-loving.’’

Instructors give the rural rookies a refresher before they hit the water. PHOTO: NICK BROOK

‘‘I’ve had farmers share experiences of losing friends and family who’d seemed fine. . . We spend so much time on the land it’s therapeutic to get a taste of the ocean, and farmers are especially connected to the land. Of course there’s comradeship, and accomplishment in a new skill set, but being in the moving sea, feeling it create its own energy and understanding how to ride it - that switches you off from work and everything else and you’re living life right in the moment,’’ Mr Drinkwater said.

Home and dry and enjoying a burger after his surf session, 53-year-old, fourth-generation sheep and beef farmer Nathan Wilson, of Glen Omaru, Matuanui, had never tried surfing before.

‘‘I saw it advertised in the Clutha Leader, thought I’d get off the farm and give it a try. It’s a new skill and another great part is meeting people and building up your network. I bring an employee most weeks. We leave the farm behind, we’re standing up catching waves and it’s good to see how we’re improving,’’ he said. 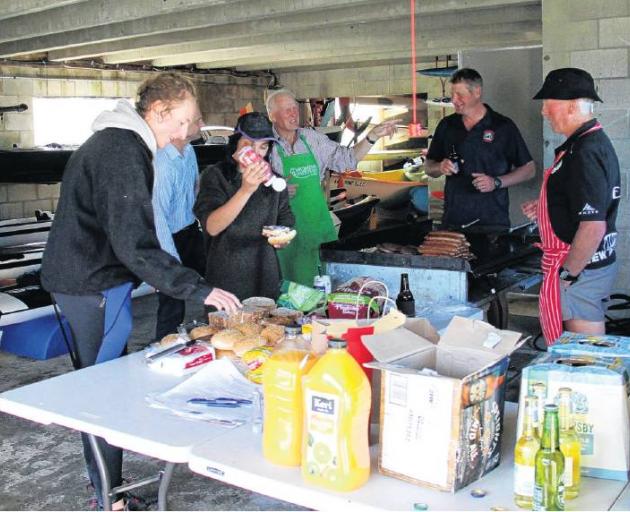 Farmers Bruce Wilson (green apron) and Martin Ford (red apron) take care of the food when the young ’uns get back from carving up the suds.

A strong showing of women were riding waves, such as Tyler Ogilvy, who works for employer and now fellow-surfer Hamish Brown at a station near Lawrence.

‘‘I’ve never surfed before. I first tried [with SFF] in January. It’s a huge change of scene. I’m going to get my own gear and get into it’’

‘‘I love passers-by asking why there’s so many utes with dog boxes and fence posts and that parked along the beach and telling them all those surfers in the water hanging out catching waves are farmers. I’m stoked to see them excited about this and the sponsors and volunteers know they’re supporting something amazing. We’re always willing, and with their help Surfing For Farmers will be back and growing next season,’’ Mr Thomson said.

Surfing For Farmers runs from December to March and farm folk should check the website throughout the winter months to stay tuned.