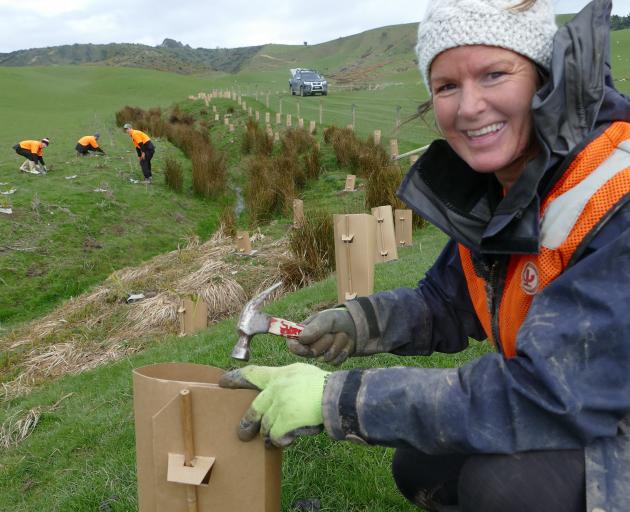 Richard Davison talks to project leaders, and to ‘‘boots on the ground’’ doing the hard yards on the $3.7 million Pomahaka Corridor Planting Project.

The Pomahaka Water Care Group was established in 2015 and has gone on to establish itself as the exemplar for the growing number of catchment projects spreading throughout the country.

That success — acknowledged with a New Zealand River Story Award in its inaugural year — has been due to a combination of doing the simple things well, experimenting and innovating, and, not least, to the buy-in and continuing commitment from the West Otago farming community.

Its latest initiative, which marked its first anniversary with a celebratory gathering of stakeholders at Leithen Glen near Tapanui on October 6, is the Pomahaka Corridor Planting Project.

At the recent celebration, things looked to be firmly on track, project manager Lloyd McCall said.

Fellow project manager Shane Bocock said the ‘‘farmer plants’’ were a vital part of the initiative.

‘‘Co-investment [from participating farmers] is central to the project.

‘‘We’re working with about 30% of the farms in the [Pomahaka] catchment, and about 95% of our plants are allocated at this stage.

‘‘In addition, while we’re on site, we advise our members where the greatest gains can be made in water quality, and that allows them to target their own contributions to planting and fencing. 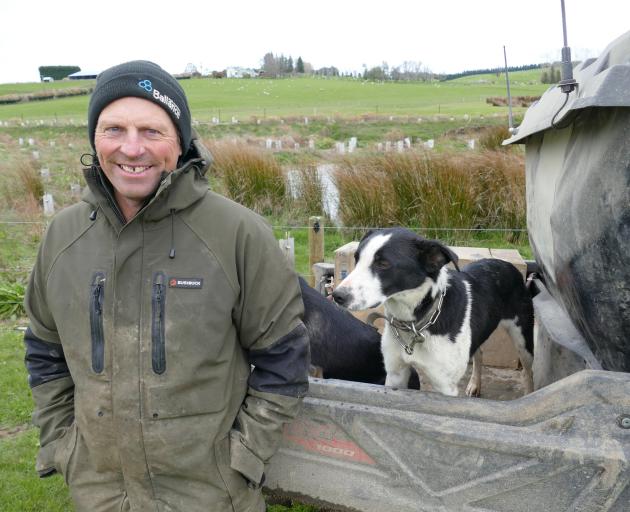 Waikoikoi farmer Geoff Stark inspects some of the 4000 native plants installed along the Waikoikoi Creek, running through his farm, as part of the Pomahaka Corridor Planting Project. Photo: Richard Davison
‘‘The end result is we’ll probably end up exceeding our initial targets, as many of our farmers are electing to do more while our teams are on site.’’

Mr McCall said the project had only been able to secure such significant funding —$3.7 million — because of the ‘‘confidence’’ the Government had that it would be adopted by the local farming community.

‘‘This investment from Kanoa (the Provincial Growth Fund — $2.3 million) and the One Billion Trees Fund ($1.4 million) was only secured because our farmer members are already so engaged down here.

‘‘It meant we could make decisions quickly, and provide confidence to funding agencies we’d get the job done.’’

Part of the funding was earmarked under the Government’s ‘‘Jobs for Nature’’ initiative, aimed at providing environmental sector employment for those affected by Covid-19 impacts on their former jobs.

‘‘I used to work as operations manager for a student travel company, which obviously dried up after [Covid-19] travel restrictions came in.

‘‘Although a lot of the work I did there had a conservation angle, in terms of pest control and protecting established habitats with our clients, this is pretty cool as here we’re establishing new habitat on a massive scale.’’

Pomahaka Corridor Planting Project managers Shane Bocock (left) and Lloyd McCall check the latest phase of the agricultural riparian planting initiative near Tapanui earlier this spring. Photo: Richard Davison
She said despite being out in all weathers, she looked forward to her work, and the camaraderie within the team of four.

‘‘It’s been good to ditch tourism for a while, to be honest.’’

Mr Bocock said the planting project had created or supported at least six jobs directly, and had supported many more by injecting cash into the wider local economy, through the purchase of materials.

And there would be plenty to keep the crew busy for the coming 12 months, given a total of 104 farms would receive attention, of which only 67 had been completed to date.

One such is 530ha Waikoikoi sheep, beef and arable farm Galabank, owned by Geoff Stark.

Mr Stark said the planting of about 4000 natives on the Waikoikoi Creek banks and surrounding wetland, as it passed through his farm, had multiple benefits.

‘‘Irrespective of rule changes, we should all be doing our bit for the environment.

‘‘The plantings and fencing here prevent stock access and stop run-off getting into the waterway. And, despite the relatively early stage things are at, you can already see with those flaxes shooting up it’s simply going to look good, and enhance the farm over the next five to 10 years.

Mr Stark paid for about 1000 of the plants, as a project coinvestor.

Mr McCall said the latest figures from the group’s catchment water quality testing showed this and earlier phases of work were proving effective.

‘‘We’ve seen a definite improvement in water quality in most tributaries, and in the Pomahaka itself, where we’re meeting or exceeding Government standards.

‘‘The beauty of the farmer-led testing scheme is we can highlight and target areas where things need a bit more work.’’

That would be the partial focus of a coming project for the Pomahaka Water Care Group, for which it was seeking funding at present.

‘‘There’s a lot going on both here in West Otago and, increasingly, in neighbouring catchments.

‘‘Next up for Pomahaka is a plan for targeted ‘‘whole of catchment’’ planting to maximise and crystallise the district’s gains.’’ richard.davison@odt.co.nz