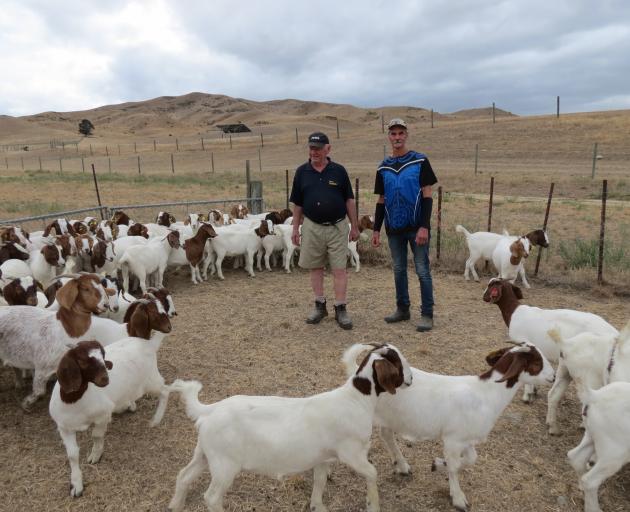 As the market for live exports was competitive, he did not wish to say which countries or clients the goats were going to.

However, he wanted to hear from farmers who might be interested in supplying or rearing goats, both for live and meat export as well as for the domestic top end restaurant trade.

''It will be a struggle to get enough animals,'' Mr Laidlaw said.

''We are trying to get more farmers throughout the South Island involved, to breed Boer pure goats or composite goats.

''We want managed goats, not ferals.''

Farmers could grow goats on poorer land to complement their sheep and beef operations.

He said Shingle Creek, which bought the goats from its client farmers, was paying $6/kg year round for goats, plus freight.

In comparison, Beef + Lamb New Zealand's Meat and Wool Price Outlook prediction for the 2017-2018 season indicated it was expecting lamb to fetch on average $5.55/kg and $2.93/kg for mutton.

Shingle Creek Chevon normally only deals with the purchase, processing and selling of goat meat from farmers. But Mr Laidlaw oversaw a draft of Boer goats in mid-January, on behalf of another New Zealand company.

They had three shipments for meat to fill in the next few months, and he was optimistic more shipments would be sought by the company's clients.

The company has been in business for about eight years and has four shareholders:

Shingle Creek Chevon also supplied goat meat to an increasing number of restaurants throughout the country and more meat was always required.

''As more meat is produced, we can supply more restaurants and as we develop the export market, we can then pay the farmer more.''

He said 20kg boxes were sent out from their premises in Alexandra five times a week.

However, one challenge was the need to sell all parts of the carcass, and they are working on that.

Mr Laidlaw said they visited their farmer suppliers regularly and had established stock management protocols and set up animal health and traceability systems.

They also solved the erratic killing timings and now have a processor with a regular killing schedule.

He said goats did have challenges, including parasite issues.

''They were good for weed control and do well on lucerne but not so much on ryegrass and clover.''

He said the company was working on its brand image, so that people knew they were buying a consistent and quality product.

''I am confident we can, but we need to start off small and work our way up.

''If we can build up numbers, we can generate more business.

Why the secrecy about what country they go to ? I’m concerned about where they end up and their future welfare and care in a region with very little animal welfare regulations and enforcement . Those of us who have pet goats and enjoy their company and spirit can make the comparison to dogs in which they (goats)bond with humans are loving and like to have some fun . I’m of the opinion that as most people would balk at eating dogs , goats should be thought of in the same vein . We don’t need to start adding another animal to dinner plates and definitely should not be exporting them in stressful long trips to destinations where they may be not be subjected to any protection or proper care.