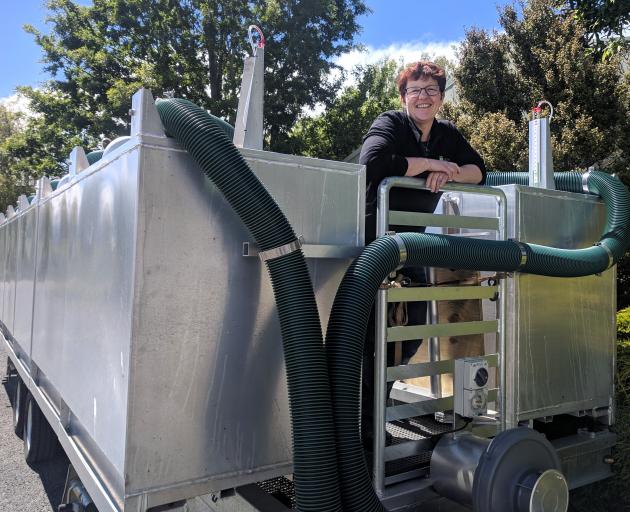 AgResearch scientist Dr Suzanne Rowe with a trailer being used to measure methane emissions in sheep. PHOTO: AGRESEARCH
This is a tale of burping sheep.

Among the work AgResearch scientists have been doing to reduce methane emissions from agriculture is a project to breed sheep that naturally produce less methane - the gas released in the burps of ruminant livestock.

Having determined sheep could be bred for lower methane emissions, the project was now being rolled-out to farms, giving breeders the opportunity to measure and select sheep with lowered environmental impacts.

Scientists had been working on the prospect of low methane sheep for quite some time, AgResearch Invermay-based senior scientist Dr Suzanne Rowe said yesterday.

Initially, sheep were measured through full respiratory chambers which took about 48 hours and cost about $1000 a sheep. It was both expensive and intensive, Dr Rowe said.

Once it was clear there was genetic variation and it could be bred for, the next step was to find a way to measure and monitor in a more low-cost way that was easier on the animal and could also be measured
off pasture.

Invermay-based principal scientist John McEwan and ethics and welfare adviser Grant Shackell worked with a team of engineers at Lincoln to produce an effective short-term measure.

Once they had a design that worked for a single sheep, the idea was to have something that could measure 12 sheep.

Wheels were then put on the trailer so it could park up on a farm, measure what sheep emitted for an hour, and then turn them back out on grass.

Breeders were interested - "they are happy to do anything they can to help environmental impacts'' - provided it did not impact on health and productivity, Dr Rowe said.

While there were other strategies for mitigating methane, this one was "first cab off the rank'' - it was simple, straightforward and could be applied straight away.

It had attracted the attention of research colleagues overseas; a trailer had already been sent to Ireland and there was also interest from Norway and China.

For Dr Rowe, it had been an exciting project to be involved with, going from not even knowing whether methane emissions from sheep were heritable, to finding out it was and could be bred for, to measuring animals and the end point of seeing it being delivered on-farm.

It was nice to be able to follow a research project through from conception to implementation to industry, she said.