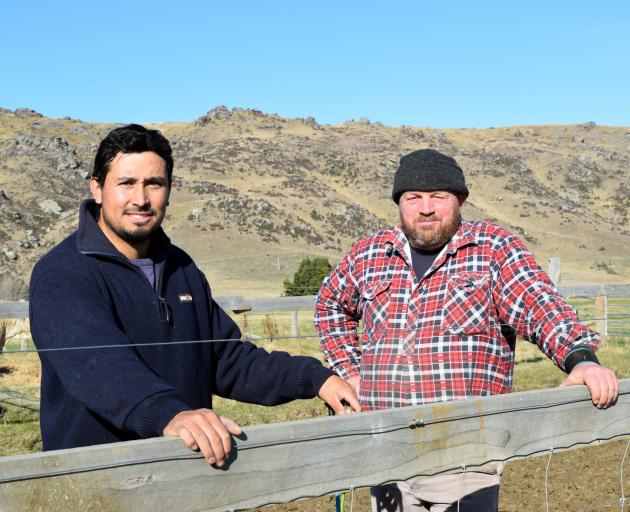 "The cream rises to the top."

"We are more than happy," Mr Dundass said after the sale.

The bull sale was one of the earliest in the calendar because if it was held any later, snow might stop potential buyers being able to access the bull sale ring on Glen Ayr, which lies 580m above sea level, about 50km south of Ranfurly.

Some of the station lies nearly 900m above sea level.

The cows are wintered on hill-country about 750m above sea level from April and only get supplementary feed when they come down for calving in late August.

Fergus Templeton, of Tokanui in the Catlins, walks in a pen of rising 2-year-old bulls.

Mr Dundass said he believed the Glen Ayr stud was the highest-altitude Charolais stud in New Zealand, and faced the longest winter and most extreme weather conditions among them.

The temperatures on the station ranged from as cold as -12degC in winter to as hot as 38degC in summer, he said.

"We probably farm in the hardest environment of any Charolais breeders in the country."

The conditions tested the cattle and made them the best in New Zealand, he said.

Glen Ayr has been in the Aitken family since 1926. 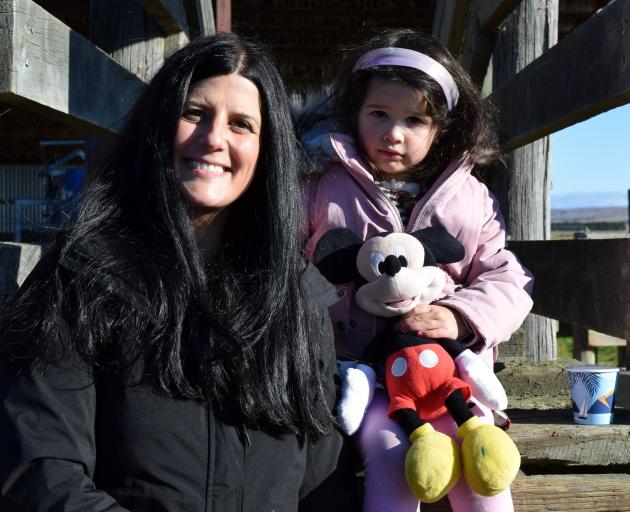 Adriana Marrero and her daughter Mariam Silva Marrero (4) wait for the start of the sale.

Glen Ayr covers about 1600ha and is part of an entity trading as Glen Ayr Ltd, which includes Glenfield, a more than 600ha finishing property on the Maniototo Plain managed by Mrs Dundass’ sister, Dawn Sangster, and her husband, David Sangster.

Mr Dundass said the weather on Glen Ayr this season had allowed for the best growing season in the past decade.

A warm spring "set us up" and was followed by frequent summer rain, allowing for good pasture growth and for plenty of supplementary feed to be made.

Planning for a 120-day winter needed plenty of supplementary feed and this season that included 200 bales of hay, 300 tonnes of silage, 850 bales of baleage, 10 tonnes of barley, and 26ha planted in kale, rape, turnips and Italian ryegrass and 13ha of fodder beet.

Autumn had been dry "but by then everything was pretty right".

An investment in irrigation had helped to reduce the impact of dry conditions, he said.

Alongside their cattle operation, they also farm 2900 Perendale Texel-cross two-tooth and mixed-age ewes and 700 hoggets.

Glen Ayr Station farm worker Jonnhy Silva travelled from his family farm in Uruguay, with his wife Adriana and daughter Mariam, to start work on the station in August 2019.

The first time he ever saw snow was on his first day of work.

After three years working in the Maniototo, he was still getting used to working in snow, Mr Silva said.

"It’s beautiful but tough," he said.

The Silva family chose to work in New Zealand because it was the world leader in farming, he said. 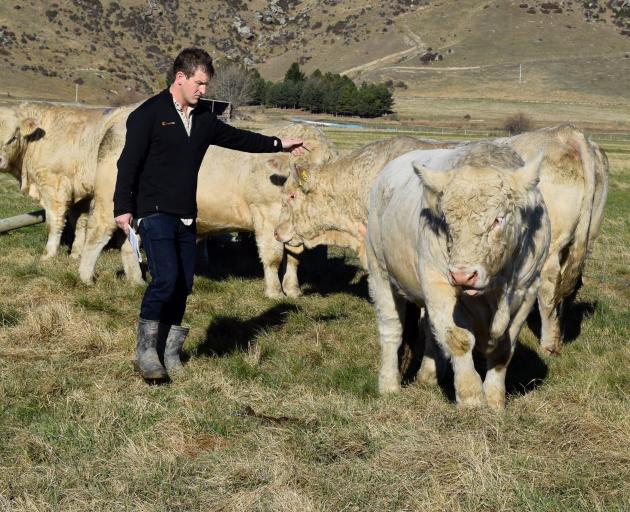 The dream was to one day own a farm.

Although his family was establishing "roots" in New Zealand, the dream of farm ownership might be easier to realise in Uruguay than New Zealand, he said.

Mr Dundass praised Mr Silva for his ability to work with cattle and for taking care of calving himself this season.

"He’s very good, you won’t get a better man working cattle. He’s very quiet and everything responds to him. It doesn’t matter what’s happening, he never loses his rag and keeps the animals calm."

"Only him and one other applied and Jonnhy drove down from Napier for an interview, so we pretty much had to take him and my word, it’s turned out marvellous, he’d be the best man with cattle we’ve ever had."