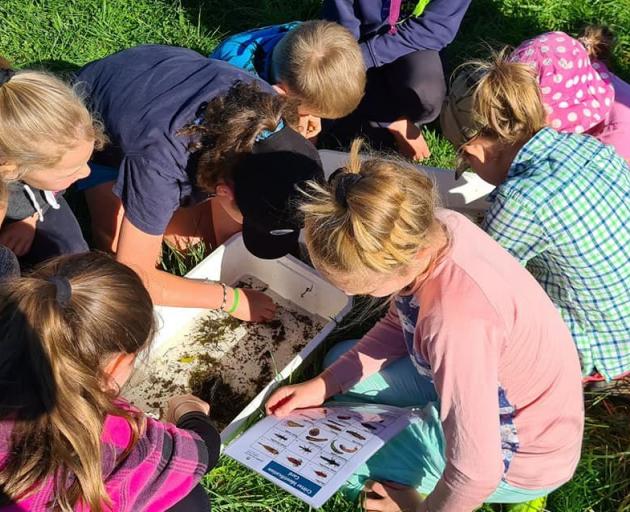 Children inspect aquatic macroinvertebrates as part of a recent Pourakino Catchment Conservation Trust event in Southland. PHOTO: SUPPLIED
A group of Southland farmers is part of a nationwide initiative aiming to consolidate and accelerate collective actions with a focus on water care.

Pourakino Catchment Conservation Trust committee member Dave Diprose said the Cawthron Institute was working with it and three other catchment groups in Waitangi, Hawke’s Bay and Marlborough, on a research project.

‘‘The aim of the project is to better support freshwater goals by looking at ways of working more collectively with partners and stakeholders.’’

The groups get together at learning forums to assist them with diagnosing and addressing issues, prioritising investments, and scaling up to achieve their goals, Mr Diprose said.

The research was intended to assist tangata whenua, regional councils and landowners to work together to meet their community’s goals.

‘‘These are important conversations to be having and we’re not shying away from anything.’’

A policy advisory group would help researchers and catchment group members to produce recommendations for how governments and the primary sector could support catchment collectives.

The project had confirmed kanakana lived in the streams in the catchment.

The group would work with tangata whenua on a plan to look after the taonga species.

Another recent highlight was hosting a field day with Oraka Aparima Runaka at Takutai o Te Titi Marae, learning about the runaka-run nursery.

The field day included discussions about how they could work together to grow and plant trees in the catchment, he said.

The group was researching and planning a project to look at the removal of crack willow in the Pourakino River and had launched a pest management programme.

The Pourakino group also hosted a highly successful stream walk in April as part of the Aparima Community Environment project — with assistance from Thriving Southland — and is working on GIS mapping catchment wide, creating a photo library of the river and streams within the catchment.

Other projects have included catchment-wide pest management scoping and implementation, and the modelling of farms in the catchment.

‘‘One of the our major achievements has been ensuring 85% of landholders in the Pourakino Catchment Group area have farm environment management plans.’’

Formed in 2014, the trust came together after a few like-minded farmers decided to work together to preserve the native bush, rivers and streams surrounding their farms, and to enhance the wider catchment and estuary environments, while preserving their farming businesses.

It is one of the oldest catchment groups in Southland and has about 66 members.