There have been widespread reports of damage to crops, vehicles, homes and buildings. Anything exposed to the brief, but violent deluge of hailstones — some as large as golf balls — on November 20 was at risk.

United Wheatgrowers Insurance Scheme (UWIS) chairman Brian Leadley said, two days after the event, that 30-odd claims had been received ranging from South Canterbury through to the western side of Christchurch, specifically Kirwee, Darfield, and Dunsandel.

However there was a high likelihood many more were affected, as the wheat-specific insurance, a levy-order deducted off sold wheat, does not include other crops.

The scheme was run by UWIS but underwritten by insurance company FMG.

“There’s going to be a lot of farmers that might’ve had barley only or fodder beet crops on dairy support farms, there will be vegetables and vegetable seed crops damaged, well over and above all the wheat which is a small proportion.’’ 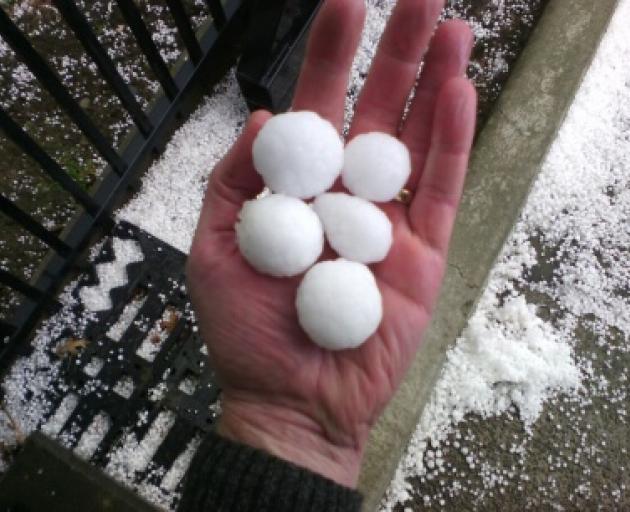 Some of the golf-ball-sized hailstones, collected at North Park Business Estate in Ashburton. Photo: Supplied
It would also include damage to pea crops, brassicas, and forage brassica seed crops such as rape and kale, as well as spring planted and high value vegetable seed crops, he said.

“If they’ve got insurance they will have their own private insurance company … but a lot of crop is uninsured.

“It tends to be a very low risk of this happening. So for most of us this would be the first time with the severity in their career.

“It’s not that it doesn’t happen. but its often a very defined little patch, which goes in belts and those farmers that are in the belts probably know who they are and usually do carry some insurance.

“It’s about economics I suppose — it’s hard to insure, it’s costly and so we can recognise it from an insurance company point of view as well. It’s very hard to plan for, so that’s why its reasonably hard for them to provide this cover.’’

Farmers were likely to cover just the main, highest value crop that was costly to grow, not some of their more commodity-type crops, Mr Leadley said.

“In arable rotation, the spread of crops helps reduce risk, because hail is just one risk that you can insure for, fire is another one and floods, things like that, so having some earlier crops and later crops can reduce the risk.”

White clover and red clover crops on his own farm at Dromore, near Ashburton, had suffered bruising but would likely fully recover, as they were not yet at the productive stage.

His early wheat had been smashed around, and the sweet corn ‘‘given a hard time’’.

Mr Leadley said an assessor would visit each property that had put in a claim and work out the percentages of potential yield loss.

To include all the data, final settlement was unlikely to happen until after harvest.

For many farmers, it was worth inspecting the crops and working with their agronomist to prevent further damage such as disease pressure.

“[They are] pretty tough decisions for farmers ... you’re looking at a reduced yield, therefore reduced earnings, but [are] asked actually to maybe spend a little bit more on the crop to protect what’s there as well — [they’re] not easy decisions,” he said.

South of Ashburton, CharRees Vineyard owner Charlie Hill, only recently commenting that any future thunderstorm could have the potential to wipe out his vineyard, said the deluge was “bad, but not total’’.

The vines, already thinned in preparation for growth, were hit by the hail which just crossed the top of it, whipping off their tops “like it was hit by a hedge trimmer.”

‘‘We’re flat out spraying it with some sulphur and copper and liquid seaweed,” he said, which was started first thing Thursday, in an attempt to do some vine recovery work.

“We are going to get a loss there but we are going to feed it extra feed to make it so we have actually got some cane to tie down next year so it keeps growing.

“It’s a bit early to know how much damage has been done.”

“We should know [how bad it is] by Christmas time, hopefully.”