Keeping the faith on a family tradition 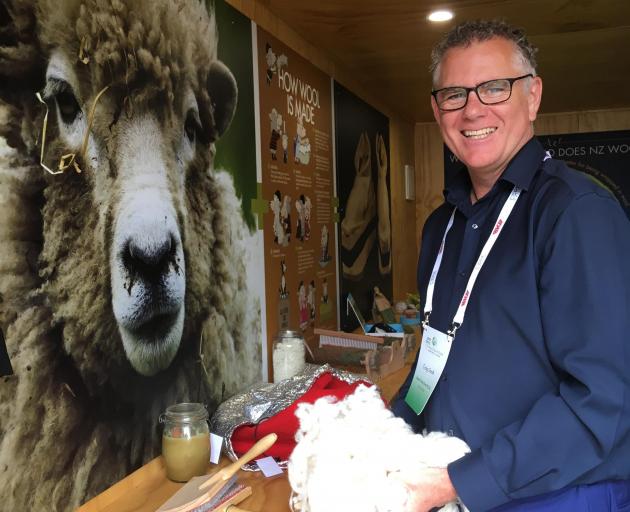 Campaign for Wool New Zealand trustee Craig Smith in the Wool in Schools "woolshed" which has been travelling around schools. Photo: Sally Rae
Tom O’Sullivan’s grandfather paid off his Canterbury farm with a single wool cheque during the wool boom in the early 1950s.

His father used to say that he could not buy a second-hand car with the proceeds from his wool, while in the last financial year for Tom, wool — for the first time in his family’s sheep farming history — came at a cost to his business.

But the Hawke’s Bay agribusinessman-turned-farmer remained passionate about the fibre, and is the chairman of the Campaign for Wool New Zealand Trust, wanting to be part of the solution rather than complaining behind the farm gate.

It was 1949 when his grandparents Dennis and Frankie O’Sullivan bought about 650ha at Hinds and broke in a tough tussock block, running Corriedale ewes.

Tom O’Sullivan’s father Brendan — one of the couple’s seven sons — recalled plucking wool off both barbed wire and dead sheep during the "pound per pound" boom, such was the value of the fibre. The Corriedales were later replaced by Romneys, due to footrot.

There was another boom in the early 2000s — dairy; many traditional sheep farms on productive areas were taken over by dairy farmers, which had a huge impact on land values and environmentally, Mr O’Sullivan said.

Eventually, the O’Sullivans sold the family farm, and all the fences and hedgerows that the two generations had spent establishing were taken out.

The family was still keen to remain in sheep farming and, in 2009 bought Pukenui Station, a 1287ha property in southwestern Hawke’s Bay.

Tom O’Sullivan had the opportunity to give up his corporate career, in which he had various roles in agri-management and marketing, to go hands-on farming.

During that 10-year farming career, strong wool had not got any better, and he described it as a "critical point" for the wool industry. He was "horrified" at the strong wool situation and eager to be part of the solution.

It had got to a point that shearing had become such a cost that he only shore once a year; in full year 2018-19, wool revenue represented a mere 4% of total farm revenue and, for the first time, wool was a cost to the business at $6506.

The family was now only shearing for animal health reasons, and the situation for farmers like himself was "deadly serious", he said.

He was asked to join the Campaign for Wool New Zealand Trust by Wright Wool’s Philippa Wright, a passionate advocate for New Zealand’s wool industry who was made a member of the New Zealand Order of Merit for her services to the wool industry and sustainability in this year’s Queen’s Birthday honours.

Campaign for Wool was a global endeavour initiated by Prince Charles to raise awareness of the benefits of wool. It has five member countries — the United Kingdom, New Zealand, Australia, South Africa and the United States.

In New Zealand, it was funded by strong wool growers and although it was limited by funding, it was totally focused on promoting the key attributes of wool, Mr O’Sullivan said.

Feedback from Wool in Schools had been "overwhelmingly positive"; a shipping container had been converted into a "wool shed" that had been travelling around New Zealand educating school pupils about wool.

This year, it was hosted by 15 schools in the North Island and 17 in the South Island, and bookings for term one and two next year were nearly full.

Wool in Architecture, to educate young New Zealand designers and architects on the benefits of wool, would likely be a webinar presentation early next year.

With the anti-plastic revolution, Mr O’Sullivan believed the level of opportunity facing the industry had never been seen before. There was a "huge groundswell" of anti-synthetic and anti-plastic, and a demand for wellbeing products.

Strong wool was not just carpet wool, and research and development and technology needed to be embraced.

Marketing was key and farmers’ trust beyond the farm gate needed to be built.

"There’s a hell of a lot of mistrust with farmers across New Zealand in this situation we are in," he said.

Mr O’Sullivan said he would be happy to pay a levy to invest in the future of strong wool.

Mrs Wright said Wool in Schools had been "truly exciting" for the trust and the momentum had taken it by surprise. It was "incredibly simple but so effective".

"We want these children to look at the problems they see in their world and figure out how wool can be a solution to some of these issues," she said.