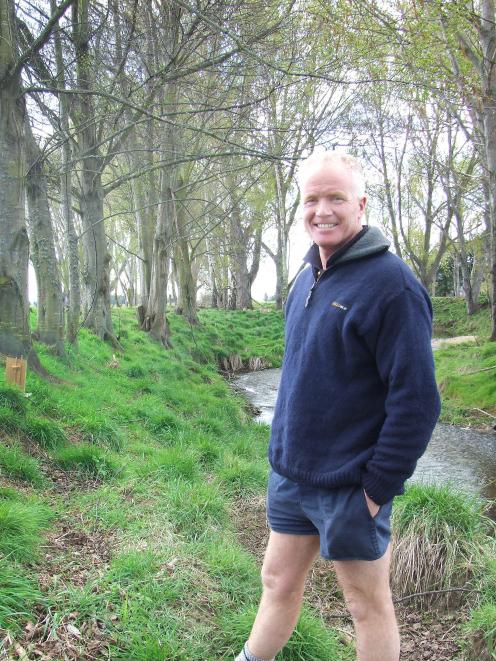 North Otago cropping farmer Peter Mitchell views native plantings beside the Waiareka Creek. PHOTO: SALLY RAE
North Otago Sustainable Land Management’s long-serving chairman Peter Mitchell recently stood down from the position. He talks to rural editor Sally Rae about why he is so passionate about farming in the district.

For 150 years, North Otago has provided opportunities for the Mitchell family with their farming business.

The current generation actively farming Rosedale, near Weston, are Peter and Sandra Mitchell, who were joined several years ago by Henry, one of their two sixth-generation sons.

"We’ve had a wonderful run really when you look back on it, on the farming side of things, a lot of family involvement," Peter Mitchell said.

And that was why the family, which runs a large-scale cropping operation, did not mind giving their time back to the community "because the community has provided a good place to live", he said.

Community involvement was something that he had been brought up with and that was "the way it needs to be".

Mr Mitchell recently stood down as chairman of North Otago Sustainable Land Management, a group originally established in 1994, driven by farmers, to address the issues of soil erosion and drought that farmers were facing at the time.

It later went into recess but, in 2013, a group of farmers keen to enhance the water quality and promote good pastoral management practices reincorporated NOSLaM.

Mr Mitchell praised the foresight shown by those farmers originally involved in instigating the group.

At that time, farming intensity was increasing under irrigation and there was a desire to look at environmental issues that intensive farming could perhaps bring, coupled with more environmental considerations that might be coming from central government.

When he joining the group, he was immediately made chairman, which was fine because he was surrounded by such a great bunch of people, he said.

Everyone came with their own set of skills — something which was important for any group — and it was a matter of working as a team.

Farming now was about getting a better balance economically, socially and environmentally. He was not a fan of one-size-fits-all legislation, saying every catchment had different needs and requirements and it was important to have localised feedback.

"If you’ve got people with skin in the game involved, it’s far better having someone like that than someone in central government dictate how you’re going to do things. They can set the direction, we set the detail."

While it took the group some time to work out its exact purpose and what its goals were, he believed NOSLaM had done "exceptionally well".

Part of the issue in getting that purpose sorted was the group "knew something was coming but didn’t know what it was", and that was still part of the problem today in the environmental space.

The goal posts kept shifting and that remained a challenge.

But NOSLaM had approached it from the point of view of not getting "bogged down in what the end point looks like".

It was about helping build and strengthen farmers’ networks, to facilitate thinking and reflection time and to ask the question "what am I currently doing well", and celebrate that.

It was also about looking at what you could do better and looking at the opportunities available and grabbing hold of some of those.

Ultimately it was about driving more confidence, both personally and within the industry, more satisfaction and more fun, he said.

"The key to it is not to be afraid or dismissive of any of those changes that may be required.

"Don’t get bogged down in the end goal, just make a start."

Water quality was an issue that did not just affect rural communities, but also urban, and it would take time.

It was important from a mental health point of view not to get stuck in that trap of instantaneous pressure, he said.

One of NOSLaM’s challenges was it did not want to be duplicating anyone else’s role or work that had been done on research and development, by the likes of Beef + Lamb New Zealand, DairyNZ and the Foundation for Arable Research.

NOSLaM was not an R and D group; its primary role was as co-ordinators to get catchment specific information that related to North Otago and make that available. It used sound science and research to drive change where required or necessary, he said.

As past chairman, what Mr Mitchell was probably most proud of was that there was another group of young people who had come in and "taken the challenge on". The new chairwoman was Nicky Hand.

Succession was important for any group or farming business; it was important that catchment groups continued and succession was one of NOSLaM’s strategies to ensure that it kept going, and to have young people having an input into their futures.

"My view of that is we need that young blood there, it’s their future they are designing. I’ve not quite had my go, I’ve still got a few — hopefully a lot — of years left," he said.

While no longer on the committee, Mr Mitchell he would continue to take a keen interest in the group — "I’ll just be an interested person on the sideline."

The Mitchell family settled at Rosedale, near Weston, in 1871 and Peter Mitchell, a qualified mechanic, returned to the farm in 1990.

During his decades farming, there had been change in North Otago — with the advent of widespread irrigation being the major change.

He believed that the calibre of young people involved with NOSLaM was a tick for irrigation that had come to previously dryland North Otago, which had added strength to the group.

The economics of farming had also changed — "you’ve got to have everything going right"’ — and you had to be at the top end of your game.

But North Otago was a great place to farm, with productive soils and wonderful landscapes, plus it did not have the propensity to flood or wind issues that the likes of Canterbury experienced.

The biggest challenge was that it was a dry area but irrigation water had transformed that. One of the challenges of irrigating hilly properties was managing soil stabilisation, compared to flat land farming.

But every region had its strengths and weaknesses and Mr Mitchell continued to love farming in the district.

He loved having son Henry involved in the family business — "he’s got the energy, that gets you out of bed" — while William was working at PGG Wrightson as a production agronomist and building up his skillset.

Agriculture had provided some "wonderful opportunities" in North Otago but "everyone had to roll their sleeves up at various times, it doesn’t just happen".

"We’ve been very fortunate on those fronts, that’s why you don’t mind giving your time back to the community because the community has provided a good place to live," Mr Mitchell said.

And outside agriculture, there were other hard-working people building the strength in the community so it was a nice place to be.

Farming needed to have a wider thought process than just economic outcomes. There had to be a balance of social, environmental and financial outcomes, and it was important to focus on that.

While there were stresses among the rural sector, Mr Mitchell said it was sometimes necessary to take to take a deep breath and look at things from a glass-half-full perspective.

NOSLaM had stayed out of politics — it would not have had any credibility if it had became political — and it was important individuals remained balanced in terms of looking at how the world functions.

One thing he had learned during his tenure as NOSLaM chairman was to question monocultures and he believed that was one of the biggest challenges going forward, including in business.

Some aspects of farming were quite monoculture now, and he believed it was important to have more of a connection to the likes of animals, crops and fruit trees.

He was concerned about swathes of farmland being planted for carbon farming, agreeing with a suggestion by Clifton Falls farmer Lyndon Strang, who previously suggested a better approach would be for farmers to be incentivised to plant the worst 5%-10% of their land in trees.

Doing that across a catchment would mean a large number of trees within 10 years, without removing productive farmland.

The Jobs for Nature initiative had motivated Mr Mitchell to do his own plantings and he had plans for more.

Mr Mitchell was proud of the engagement that NOSLaM had with schools. Educating young people from a young age all helped with connection.

As the world population grew, so did the urban population and consequently the disconnect from urban to rural. "There’s nothing wrong with that, that’s just life," he said.

But it was great to get pupils involved and see them get their hands dirty, helping with planting days.

It was a great way of practical learning, something Mr Mitchell was a supporter of, both due to his rural upbringing and also his mechanic apprenticeship.

There was a lot to learn in the agriculture sector and he was excited for anyone wanting to get involved in it "because we need food".

"There’s a lot of challenges out there so there’s going to be a lot of opportunities. That’s a good way of looking at life. It’s about looking at those opportunities and having a go at doing something about it."