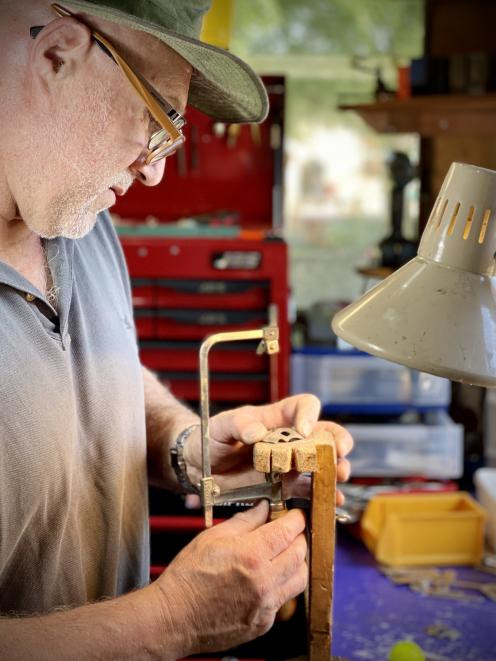 Jeweller Brendon Jaine, of Invercargill, makes a shepherd’s whistle (below) from a spoon. PHOTOS: ANNA CLAIRE
A Southern jeweller continues to muster a new way to sell his shepherd’s whistle as his primary client base remains locked out.

Brendon Jaine, of Invercargill, said he had made up to 300 shepherd’s whistles from antique silver-plated spoons in the past six years.

Before Covid-19 closed New Zealand borders to non-residents in March last year, most of his whistles were sold to tourists at a farmers’ market in Queenstown.

‘‘The whistles are all around the world.’’

In a bid to survive the impact of Covid-19, he launched a website to sell his jewellery so international clients could continue to buy.

The journey to making the whistles began when he was a boy.

He had an epiphany after his mother told him many spoons on sale in antique shops were silver-plated. 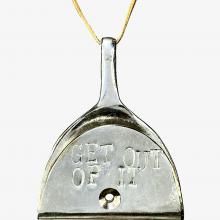 He began collecting the cutlery with a plan to transform them into something beautiful one day.

The spoon collection had been ‘‘sitting around forever’’ waiting for an idea to dawn.

The moment came sitting around a bonfire at a party, when a shepherd talked about how he made a whistle from a spoon.

The ‘‘throw-away comment’’ was the beginning of the idea to transform some of his cutlery collection.

The once original idea had been copied by others so as a point of difference he began stamping commands on the whistles, including ‘‘get in behind’’ and ‘‘that will do’.

The idea for stamping the phrases on the whistles came after hearing shoppers at the market reminiscing about the commands their fathers would yell at their working dogs.