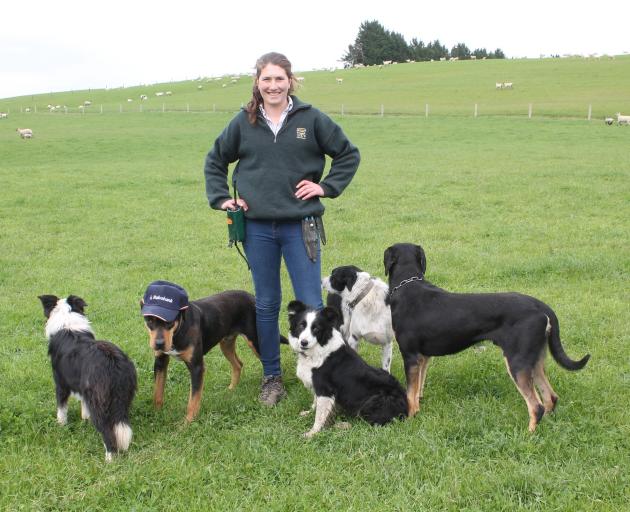 Martha Broughton was able to combine her passion for dogs with her dream job as genetic manager of the sheep block at Mount Linton. PHOTO: LUISA GIRAO
From a very young age, Martha Broughton (22) had a nurturing attitude towards animals.

The Southland woman developed a love for animals on her parents’ sheep and beef farm at Scott’s Gap — but it wasn’t only those animals she was interested in.

Her father used to train dogs and Ms Broughton learned how to help him.

In her holidays, she started to do that to earn some extra money.

Nearing graduation, when she had to think of a pathway to follow, Ms Broughton was only sure she wanted to work with dogs.

‘‘I wanted to work with them in some capacity.’’

She thought she could join the police to work with dogs there, to be a dog-handler or even on border security.

‘‘I thought a good stepping stone would be to complete an animal science degree.

‘‘I was not keen on the whole farm thing, but after doing some casual work on farms during the holidays and completing some papers at uni, I realised I really enjoyed it.’’

It was on one of these vacations she started to work at Mt Linton, one of the largest privately owned station properties in New Zealand, comprising about 12,145ha.

When its sheep genetics manager had to move back home to take care of her own farm, Ms Broughton saw an opportunity.

After she followed her for three months, she was offered the position.

In the job, which she has held for almost two years, she focused on producing genetics that survive and thrive in a harsh environment.

‘‘I look after the sheep block which has about 5000 ewes.

‘‘I’m in charge of the genetic part of the study which means I do all the selection of the ewes.’’

Her study was focused on the ability to produce marbling qualities in lamb.

‘‘It gives a very high quality, better flavour than a normal lamb. The meat is more juicy. It is a unique product.’’

The aim of the study was to reach a ‘‘high-end market’’ which looked for a more premium cut, she said

Ms Broughton, who is also part of the Southland Young Farmers group, said she loved working with genetics and believed it was the future of farming.

‘‘The science can really help farmers. Learning the why not just the what — yes, I need to go out to drench but why I need to do that?

‘‘Genetics is the way to go forward. Otherwise, we would still be breeding a skinny ram who has bad feet or wouldn’t be able to survive.’’

She believed genetics could help farmers make more money ‘‘without changing their system too much’’.

Ms Broughton hoped to continue to develop her genetics studies while she had the help of her six dogs to do the practical work.

‘‘I really enjoy the farm job. It is great to be out in the fields and working with my dogs.

‘‘I can say I’m getting the best of both worlds.’’