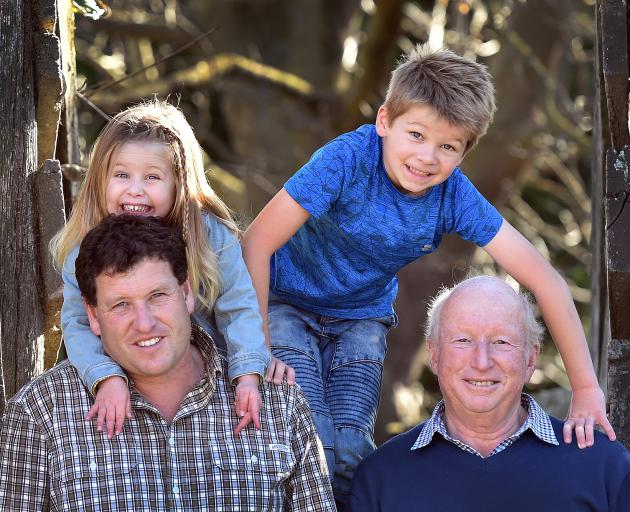 The Bathgate family of (from left) Simon, Ashlee (3), Caleb (8) and Ian, at their Taieri farm. PHOTO: PETER MCINTOSH.
A Taieri farm, owned by the same family for 150 years, has been given a New Zealand Century farm award.

Despite the cancellation of the usual awards dinner due to the Covid-19 pandemic, the Janefield farm and its rich family history did not go unnoticed.

The 220ha farm is owned by father and son Ian and Simon Bathgate.

To be considered for the award, an application including photographs and documents supporting the farm’s history had to be submitted.

Ian Bathgate said he and his family had always been aware of their ancestors’ stories, which had allowed them to further appreciate what they had.

“We have been very lucky we landed where we did.”

Alexander Bathgate arrived in Otago from Scotland in 1861 after he and his seven family members spent 98 days at sea on board the Pladda.

Mr Bathgate said when Alexander purchased the first 137 acres (55ha) in 1865, the Taieri area had been a swamp.

But the family had developed and drained the land since.

In 1871, the then dairy farm became the Janefield farm, named after Alexander’s mother and daughter who were still in Scotland.

Ten years later, his son, John, took over the farm. He passed it on to his sons, Peter and George, in 1915.

Under George’s ownership, the farm changed from dairying to sheep, cattle and wheat production in 1957. Ian Bathgate said while his brother chose to become a doctor, he had always been “intrigued” by farming.

“My mother and father never made us farm; it had to be our choice.” And he chose to follow that passion by taking over the farm from his father, along with his own son, Simon.

“If you are not passionate, you are better to go and find something else to do.”

He and his wife, Colleen, live on the farm, which is now for cattle and lamb finishing, as well as the production of barley, oats, peas and cereal silage.

Simon and wife Julie, along with their two children, Ashlee and Caleb, live about five minutes down the road.

“One of these days, we will probably swap houses,” Mr Bathgate said.

He said learning to adapt had been important, as the industry continued to change, and their family had to change with it.

“I think farming is abit like life; what you are doing 10 years ago, you are probably not going to be doing in 10 years’ time.”

Along with no control over weather events, Mr Bathgate said the biggest challenge for a farming family would often be family succession.

“We seem to have reasonable-sized families and we want to be fair to all members of the family, and that can be quite difficult sometimes.”

As for the future of their farm, Mr Bathgate said it would be there for his four grandchildren, but “only if they want it”.

The records of the Century Farm awards recipients are archived at the Alexander Turnbull Library in Wellington.

So sad to see the land drained - so much lost to tangata whenua.