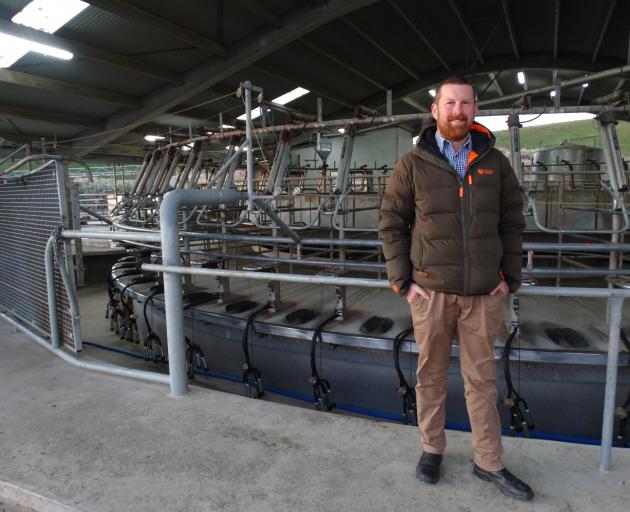 Avon Glen farm manager Sven Thelning outside the Enfield dairy farm's milking shed. PHOTO: DANIEL BIRCHFIELD
Sven Thelning is just as comfortable on the farm as he is high in the clouds.

Farm manager at dairy farm Avon Glen at Enfield for about four years, the North Otago born father of three grew up on his parents’ sheep and beef farm at Herbert but gave up life on the farm to pursue his interest in aviation.

But, as he suspected might happen one day, the lure of farm work was too great to resist.

‘‘I had a bit of experience overseas when I left school, but after that I went into aviation for a bit before I got back into farming about 2014 and have been at the same place ever since.’’

That trip overseas was in 2006 and gave him a first-hand look at a different side of farming.

‘‘I got an opportunity to go to Denmark for nine months and spent six months working on a sheep farm over there, which is quite different to New Zealand, of course, being indoors. After that, I spent the summer travelling, before I got into the flight training.’’

Mr Thelning started his flight training full-time in 2008, became an instructor with the North Otago Aero Club and landed a job with a small airline company in 2014, which at the time was trying to establish itself in North Otago. However, the venture did not work out quite as he had hoped and ultimately led to his return to farming. 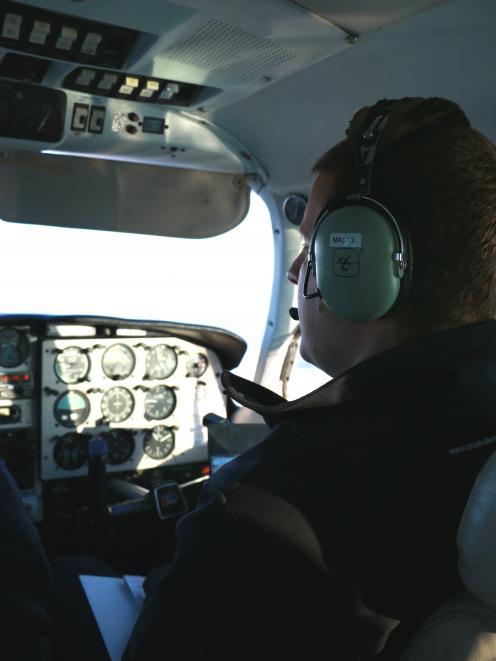 Sven Thelning in the cockpit during his time with Mainland Air in 2014. PHOTO: REBECCA RYAN
‘‘We came to a bit of a crossroads. We had a go at scheduled services between Oamaru and Christchurch working for Mainland Air, but it didn’t quite work out with the demand side of things. So, I had to decide whether I had a crack at Air New Zealand — I had the hours — or did we stay locally closer to the kids’ grandparents in a community we really liked.

‘‘Dairy farming was a pretty attractive option. It provided a really nice house to live . . .as well as all the formal training being paid for. It was just that farming lifestyle I had experienced and knew it was a great environment to bring kids up in.’’

Mr Thelning has worked at Avon Glen since 2014, including the past four years as farm manager.

The roughly 380ha dairy farm milks 800 to 850 cows at its peak. The bulk of the property, 220ha, is a dedicated dairy platform and roughly 30ha is planted in fodder beet.

Dry stock is run in other areas, dominated by limestone cliffs and steep land.

He also had an interest in technology and how it can benefit Avon Glen.

Mr Thelning described his job as a mix of ‘‘routine and changing seasons’’ which provided him with plenty of variety, from farm maintenance to stock handling.

‘‘In dairy farming these days, there’s a lot of science and a lot of data. There’s a bit of work on the computer gathering and processing data to make decisions.

‘‘I wouldn’t say we are the bleeding edge, but definitely the leading edge. We’ve got the collars which are great for heat detection instead of having a person get up every morning during mating time and standing on a platform trying to detect cows that are on heat.

‘‘The collars do that for us and draft then out. That works as well, if not better, than a human. They also pick out cows that are crook.

‘‘Another bit of technology is the Mastaplex. You take a sample of milk if a cow has got mastitis and it will tell us exactly which drug to use, but more importantly it will tell us if the drugs are not going to be effective . . .and we are not contributing to the antibiotic resistance problem.’’

Mr Thelning has ‘‘never questioned’’ his decision to pursue farming and has a diploma in agribusiness and a lifestyle he enjoys to show for it.

He still flies every so often, most recently dropping a friend off in Invercargill to pick up a ute, which he said was a good excuse to split the price of a flight.

He understood first-hand what it was like changing careers and, while his decision was not the result of a global pandemic, he sympathised with those in a difficult position and said working in the rural sector was a viable option and encouraged people to at least consider it as a career.

Mr Thelning planned to get back into instructing soon, to support the club’s yet-to-be recruited lead instructor, and also remained firmly involved with the Rotary Club of Oamaru, even holding a fundraiser for the organisation in the form of a tour of the farm to show people the landscape, including a swagman’s cave and Maori rock art drawings.

For now though, it was all about Avon Glen and his family —wife Violet and children Hazel (6), Alfie (5) and Ted (3).

‘‘They just love it. Alfie in particular is a wee farmer. He’s got his tractor and he likes going out and putting up fences and feeding out to his cows. The other kids love it as well.’’