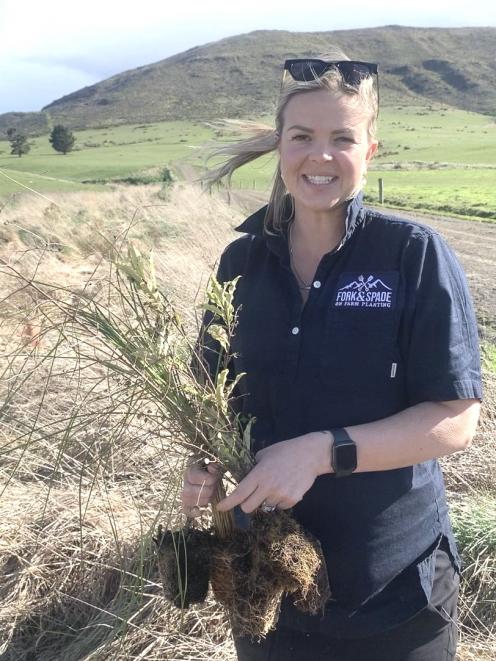 Tammy Taylor is helping farmers protect their waterways at any budget. PHOTO: SUPPLIED
Landscaper Tammy Taylor was born and bred in Glenorchy — back when it was a bit more ‘‘rural’’.

She rode a horse to school, loved motorbikes and ran around barefoot, describing it as ‘‘a nice, relaxed upbringing’’.

Being a country girl has remained a core part Ms Taylor’s lifestyle, now living on a sheep station with her partner in Mossburn.

While he tends the sheep, she’s running an all-women landscaping team specialising mostly in riparian planting, called Fork and Spade.

Always in the back of her mind was advice from her father saying if she worked hard and got a trade, she’d ‘‘always have something to fall back on’’.

So when she was booted out of Wakatipu High School, because ‘‘it wasn’t for [her],’’ Ms Taylor took up her first job planting trees in Paradise Valley.

‘‘Back then it was just really a pay cheque,’’ she said.

Nonetheless, that role spurred her into completing a horticulture apprenticeship and that eventually became a foreman role at vegetation management company Asplundh, at the ripe age of 21.

As many in their early 20s do, Ms Taylor looked to move to greener pastures, including a stint as a sales representative for a livestock transport company and an OE in Canada.

What drew her back to Otago was the promise of a ‘‘great opportunity’’ in another sales rep role which would allow Ms Taylor and her partner to set up shop in Mossburn. But after three months Ms Wright was left jobless when work ran out.

It wasn’t until she responded to a post on a Mossburn buy, sell and swap page that things started to look up.

‘‘This lady had said ‘can anyone come do some housecleaning for cash?’

‘‘I thought, ‘I'll just put my hand to anything at the moment, just to get out of the house’, because I like, cried on the couch for two weeks’’. 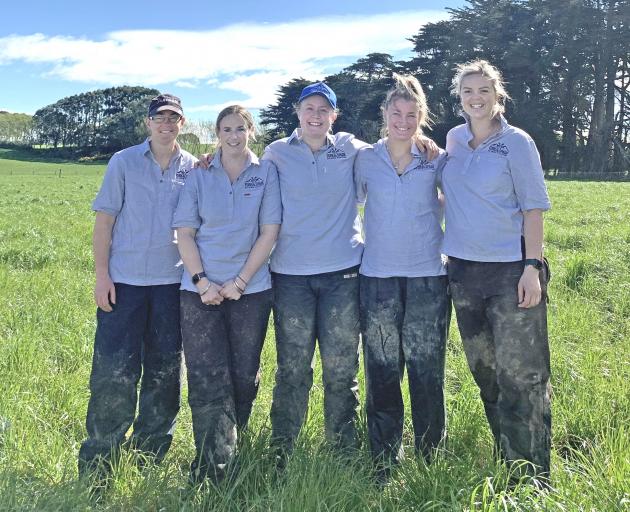 The all-women team at Fork and Spade (from left) Vicki Jensen, Anna Waghorn, Beatrice Jarvis, Emma McCloy and Tammy Taylor makes light work of riparian planting. PHOTO: SUPPLIED
While at the house, she was asked to do a spot of gardening and the rest was history.

‘‘I got thinking literally within that moment . . . ‘that's right, I am trained in horticulture, I do have something to fall back on’.

‘‘So I borrowed my mother in law's car and I had maybe a rake, a spade, a couple of buckets and a pair of secateurs and I was just doing quite basic gardening around Mossburn’’.

The business grew rapidly. Ms Wright hired her first staff member after three months and after six, she had a new ute.

Now, she has five full time staff members who focus mainly on on-farm riparian planting and are able to do their apprenticeships through her.

‘‘Just offering a really cool workplace for people is probably the biggest reason that I get out of bed.

‘‘I don't want to lie and be like ‘I just love plants’. . . I do love that creativity side . . . but specifically now we are doing health for waterways in Southland and working with farmers . . . it’s giving me that rural fix and I can catch up with farmers and make a difference for them’’.

Last year national regulations were enforced as part of the government’s Essential Freshwater programme to exclude stock from waterways, which meant waterways had to be fenced off from stock. In some cases there needed to be 3-5 metres between the fence and the edge of the waterway.

This belt of land is where riparian planting takes place.

‘‘All that we're doing as far as far as the riparian stuff is just coming in, measuring the width of what their fences are from obviously fence line to water and then in the length of that and finding space in between. So it's just really a buffer zone from the cattle, sheep or anything that's grazing to the water, just to protect the waterways’’.

There were obvious benefits to riparian planting which included erosion control, wildlife habitat maintenance and water filtration and pollution control.

Ms Wright said it could be done in different ways to suit different budgets which was why she personally spent so much time consulting with farmers.

‘‘Browntop grass works fine, there is the aesthetic side where the plantings obviously a lot nicer to look at and give shelter in shade to the stock and also shade the creek, which helps with weed suppression in the creeks and then also makes a really nice habitat for bugs and birdlife’’.

She and her partner are also farmers who understand this kind of work can seem like a burden but she said several funding options were available.

‘‘I'll never go looking for work and I'll never try and push this on to anyone.

‘‘If our phone rings, obviously, they've taken the step and they want to be proactive about their water health’’.

Fork and Spade was recently named emerging business of the year of the NZI Rural Women New Zealand business awards.