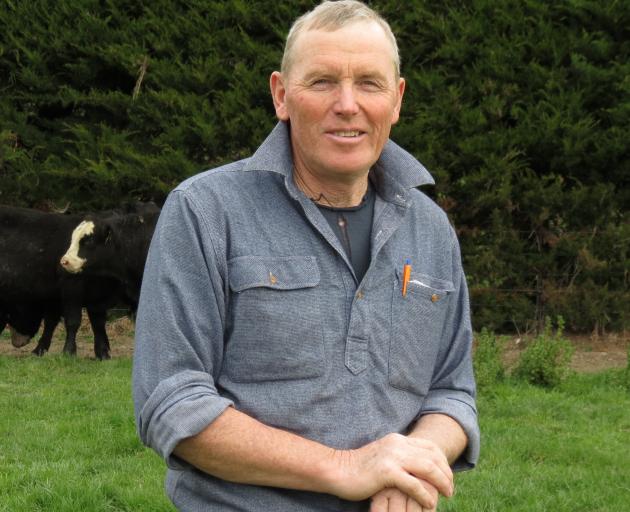 He said Simmentals had not been promoted as a maternal option in New Zealand in the past.

Waitahuna sheep and beef farmers Julene and Garry McCorkindale, of Glenside Simmental Stud, are offering one R2 and five yearling Maternal Black Simmental bulls in an online sale next month.

The stud is one of the first Simmental studs in the South Island to breed maternal black Simmental bulls, and it will be the first time it has sold any animals in an online auction, although it has sold one or two in past on-farm sales.

They would still have their normal on-farm sale in May.

In the US, 80% of all Simmentals were blackpolled and sought after.

''They have been doing it since the 1990s in response to the big hold the Angus breed had on the market,'' he said.

Glenside Simmental Stud is offering one R2 and five yearling black maternal Simmental bulls in a sale next month.
''Feedlots wanted to to buy black cattle so they bred Simmentals crossed with Angus and then bred back.

''Once they get the black gene, it is dominant and for the past 30 years has stabilised, although smaller than the traditional Simmental.

''Now we have reached a point where, although they are Simmentals, they are a different type of animal and bred for a different purpose.''

He said they were a new option for commercial beef farmers in New Zealand for a maternal beef breed.

Mr and Mrs McCorkindale have bred Simmentals for many years, which are normally considered a terminal sire breed.

''The Simmentals are a fast growing, high-yielding breed that can be put over traditional British bred beef cows,'' he said.

''They are a new option for producing efficient commercial cows,'' Mr McCorkindale said.

''The size of the cow is really important when it comes to profitability and that is often overlooked by beef breeders.

''An efficient commercial beef cow needs to be good at laying down fat in the summer and living off that fat during winter, with cows' weight fluctuating through the year.''

He said according to BLNZ (Guide to NZ Cattle Farming), for beef cow systems producing calves to finish at 300kg CW, about 75% of total feed is required by the breeding cow, including 50% just for her maintenance.

Maternal sires meant their daughters were kept for breeding and their sons grown out for killing.

The calves have more marbling and a large eye muscle area.

The couple farm on their 750ha property near Lawrence and in addition to their 120 stud cattle, they also run 4800 Romdale ewes and 1600 Romdale hoggets.

Their Romdale rams are first-crosses from Turanganui Romneys in the Wairarapa, which swaps its ram hoggets with the Mt Guardian Perendale stud in Parnassus.

''We find we are getting more lambs than from straight Perendales,'' he said.

''I think they are a better bodied sheep with a deeper rib.''

They usually have around 135% lambing, although ewes scanned back about 15% after the area went through one of its driest autumns he had seen.

''We had a fantastic flush of feed through last spring and early summer, but then the tap turned off and the stock went backwards through the autumn.

''We wintered about 7% or 8% less stock to get through the winter and to match our feed demands with our feed supply.''

He said they had had only minor issues with salmonella and ''touch wood'' there had been fewer bearings than usual this year.

The slow start to spring had also held growth up.

Lambs reach about 18kg and sold prime, although in the past couple of years the dry conditions have meant many have been sold as stores.