By Sally Rae
0 Comments
A whistle a week.

It was Gerard Middleton’s penchant for chewing through his dog whistles that led to his wife, Carleigh, launching a business.

Mr Middleton, a sheep and beef farmer from The Key, near Te Anau, was going through a whistle a week, while his wife quipped he "should just train his dogs better".

As the cost of his chewing habit mounted up, the Middletons started buying dog whistles through Boulder Bluff, a company in the United States.

They were thicker and of better quality, she said, and Mr Middleton managed to get about six months out of them.

Then other people wanted to buy them, so they got bulk orders. Now Mrs Middleton has launched The Key Dog Whistles, having a stall at the Southern Field Days in Waimumu this week. 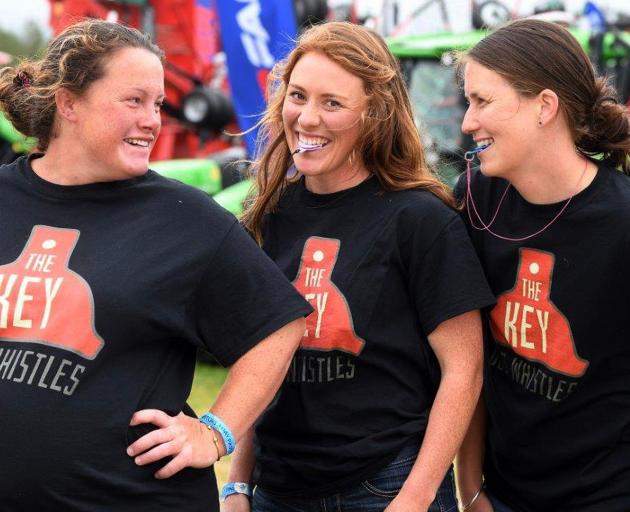 Expectant mother Carleigh Middleton (left) has been helped by Talia Oldham and Virginia Shefford at this week’s Southern Field Days at Waimumu. PHOTO: STEPHEN JAQUIERY
She had two assistants: Talia Oldham, who was the resident whistle demonstrator, and Virginia Shefford, who quipped her main job was "making sure she holds together", referring to the impending birth of Mrs Middleton’s third child, scheduled for next Tuesday.

Mrs Middleton was enjoying yesterday’s cooler temperatures and patches of drizzle, saying it was much kinder on her body.

The trio joked that they had contemplated putting a "stripper pole" outside their tent, to draw the crowds over; it had been touted that Ms Oldham could slide up and down while whistling.

Mrs Middleton, who said that was definitely not an option for her, said she could blow a whistle — "but I don’t know if the dog knows what I want it to do".

Gore district Mayor Tracy Hicks said it had been a huge couple of weeks for the area, with last week’s flooding and the field days this week.

It was the first time during his tenure as mayor that a state of emergency had been declared in the district and it had "really tested" it "on all fronts". But it had also shown that community spirit was alive and well.

It was "just fantastic" to see the number of people coming through the gates at the field days and the buzz around the grounds.

It was a massive event for the Gore district, not only in terms of the number of people it drew and the economic benefits and spin-offs from that, but also just the buzz it generated in the community, he said.