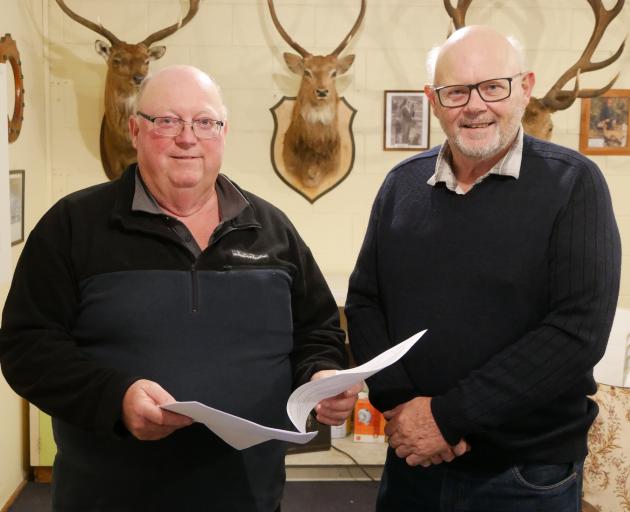 At the beginning of the year, the North Otago branch submitted an application to the Department of Conservation (Doc) to build a public hut on the Waianakarua Scenic Reserve, south of Oamaru.

After a few months of finger crossing, the members have got the go ahead.

For hut project co-ordinator Barry Wilson, it was a huge relief.

The process spanned two years and required an independent assessment of environmental effects and a geotechnical assessment, resource and building consent from the Waitaki District Council, consultation with local groups and Ngai Tahu, and fundraising.

But it had all been worth it for Mr Wilson.

The hut would be more than a refuge in the bush for hikers, campers, and hunters alike — it was more of a legacy.

Three of his four grandchildren were "dead keen on hunting".

Mr Wilson was 5 years old when he went on his first hunt, and would soon take his 13-year-old grandson, the oldest of the three, to hunt for his first deer.

Mr Wilson was proud they would benefit from the build in the long term.

"We are putting back something for the future generations."

Mr Wilson said the club had done a great job of raising funds and was thankful of the community support.

But the work was not over for the branch, as now it had to build the six-bunk cabin and install two rain water tanks.

The next step was to helicopter building materials and volunteers to the site and complete the construction, all the while keeping under a budget of $100,000.

He said the project was in a bit of a limbo as winter approached, but the build was likely to start in spring.

This was also dependent on the availability of the branch’s three volunteer builders and three support workers.

"Hopefully it will be done before Christmas."

Once complete, the hut would be owned by Doc, but maintained by the deerstalkers.

The deal was sealed at the end of April by branch president David Hay and secretary Sherilyn Byron, who signed a legal agreement with Doc.

The cabin would be known as the "Kahikatea Lodge" and would be entirely dependent on rain water, something Mr Wilson thought might be an issue over its first summer.

Doc senior heritage and visitors ranger Shay van der Hurk said it was great to see the hut proposal progress to the next stage and Doc looked forward to the new hut providing an additional safe shelter for those using the reserve. "We think it will be an excellent addition to the reserve."