Hunting guide Tony Higgins decides not to fire at a doe because he could not guarantee the shot. PHOTO: STEPHEN JAQUIERY
It’s a long way to the chop... if you want to catch it yourself. Lisa Scott meets the Upper Clutha Deer Stalkers Club and asks them for their favourite recipes.

What are we hunting?" I asked Mr Higgins.

"Hopefully a delicious wee deer, or a porker if one is unfortunate enough to make itself known," he said.

Otago Daily Times photographer Stephen Jaquiery had some concerns the night before. "I think lipstick is very visible to deer," he texted.

"Maybe don’t wear any?" I suggested.

He didn’t, but I turned up in a squeaky waterproof jacket and pants that went swish swoosh. We drove to the Neck and glassed up above the isthmus looking into Glen Dene, white caps on Lake Hawea. The rain was torrential, the wind gusting around 30kmh.

The first thing I did was slam the truck door getting out.

"I would have said ‘don’t slam the door’, if I’d had a chance," said Mr Higgins.

Too late. Four young spikers shot their heads up over the bracken, bouncing away with tail flips of derision.

The Upper Clutha branch of the New Zealand Deer Stalkers Association attracts a diverse age range of members; a gratifying number of women and young people attending the hunts course they offer every September, taught right here at Glen Dene.

The last course’s participants ages ranged from 16-65. The club would love more female members. Women are great to teach because they listen to instructions.

Lisa Scott tries her hand at shooting at the club range. PHOTO: JAMES MITCHELL
People were getting into hunting because they were foodies, said Tony (Higgins), who has been hunting for the past 25 years; works as a hunting guide in the season formerly flavoured with Americans and has a great line in chat.

"They want to get connected; you can’t get wild pork at the supermarket. I like a lovely little piggy wiggy woo; joint it up and cook for about an hour with lots of seasoning, cream and rosemary."

His favourite though, hands down, is venison mince used as burger patties.

Dinner starts here, but hunting’s not a cheap or convenient way to source your meat. There’s helis, diesel ... "and we’re gear nuts if nothing else. I’ve gone back to old-school wooden rifles rather than these Tupperware ones. Dints on timber give it a patina, dints on plastic..." he pulled a face.

You need to have butchery skills, practise exemplary food safety - which begins the moment you shoot the animal - and be a fairly decent cook, too.

"Or you’ll need a chainsaw to cut your steak."

These attributes, as well as bushcraft, river crossing nous, a high level of fitness and accuracy are all required long before your two veges meet meat.

We tracked up and down as the rain came in sideways. Broken bushes from antler-polishing told us we were on the right path. We examined a lot of poo: female red deer poo, like big raisins, male poo, nuggetty like half a corn cob. Investigating poo in the rain was quite enjoyable. When I’m happy I make a humming/singing sound.

The afternoon was all about the deer we didn’t shoot. A young buck across a stream who would grow into a trophy stag, three deer on the skyline, a shot too unpredictable to take, another deer right in front of us. I held my breath. But the shot wasn’t right, and the animal was becoming agitated, which would spoil the meat. Hunters aren’t Rambos, spraying everything in sight.

Returning to the truck, we caught a glimpse of those same four deer. They’d simply stayed ahead of us and come full circle, sniggering in the bush. Sometimes you take a rifle for a walk. 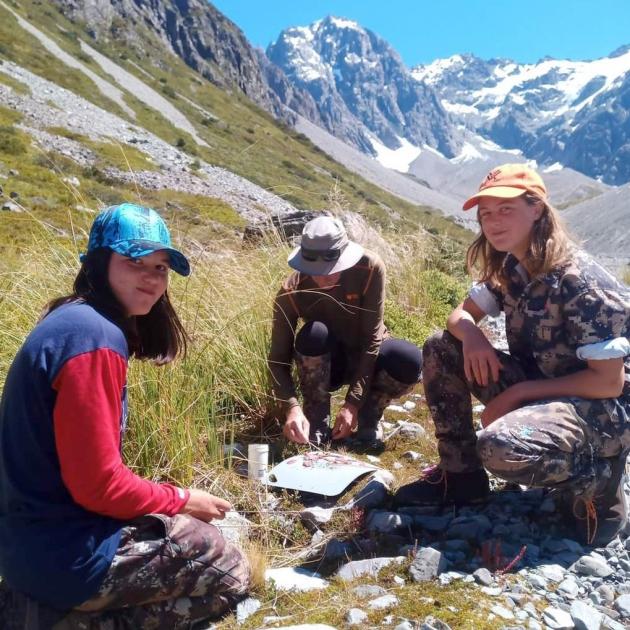 Ella Higgins and her sister make some tahr capriccio while waiting for the helicopter to pick them up after a four-day trip in Aoraki. They spotted, stalked, shot, sorted and carried out their own animals. PHOTO: JAMES MITCHELL
Fifteen-year-old Ella goes after bunny, tahr, deer. Tahr are little-known good eating, high on the delicious scale. For Ella, the appeal of hunting is in the sustainability of the meat, knowing where it came from, and personal accountability.

"You pick what meat you eat. You shot the animal, you saw it die, made a connection to it. You have to read the signs, to become it, be where it’s going to hang out. It doesn’t come to you. You see if it’s a good animal to have. Then calm your breathing, control your emotions. If you miss the shot and wound the animal, you’ll have to follow it for however long it takes."

Seeing how they are alive too, is so satisfying.

"You walked to get it. You put in all that effort to get that meat and get it out."

The real-world quotient of Ella’s life is very high, the virtual reality percentage very small and mostly reading books. Ella’s rightly proud of her skills as a huntress, I expect there’s nothing like knowing you’ve put meat on the table at 15.

"Choppered in, you set up camp, leave mid-afternoon as tahr are active at dusk. Walk up really steep mountains, scree slopes. Tahr have excellent eyesight, like looking through a telescope. My whole family hunt, it’s a family thing we do."

Ella’s mum, Nicky, has had her gun licence for 15 years. She attends the club’s competitions at Farm Creek rifle range to pit herself against others and herself, and "give myself reassurance I’ve got the accuracy I need. We want the girls to be able to fend for themselves - with back-country skills and faith in their own abilities. Firearms are not taken lightly, owning them is a privilege. 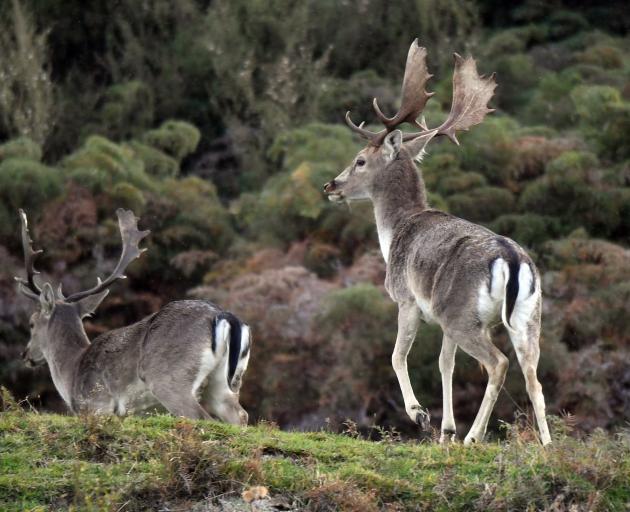 A fallow buck is left to run free. PHOTO: STEPHEN JAQUIERY
"I’ve been concerned for years now about where my food comes from. I want to eat meat that had a fair life, while recognising that you are responsible for taking that life. I never think, ‘fantastic!’ when I shoot an animal, I think ‘thank you’.

"We live in Makarora and need to be realistically prepared should we get cut off, be able to survive unassisted if it comes down to brass tacks. It’s always the guy with the full freezer who feeds the community in bad times. Hunting draws us together as a family, helps us understand our roots and connection with the land."

Stepfather Scott says climbing 1400 vertical metres in a day requires a high level of physical fitness and hunting teaches the girls how to deal with adversity and challenges.

"They are very disciplined, good at assessing situations and staunchly independent. There’s always a gigantic smile on their faces. I feel they can look after themselves once they go out into the world. They’re strong. Carrying 25-30kg each, I’ve got my tongue hanging out and they’re chomping behind me. As a dad, when they start dating, I know no one’s going to mess with them."

In the hills they make venison or tahr carpaccio, taking fresh herbs, garlic and olive oil along and whipping up a fresh pesto with parmesan and fresh lemon for juice. At home, slow cooked pulled tahr with a home-made coconut-based sweet chili and peanut sauce is a family go-to. 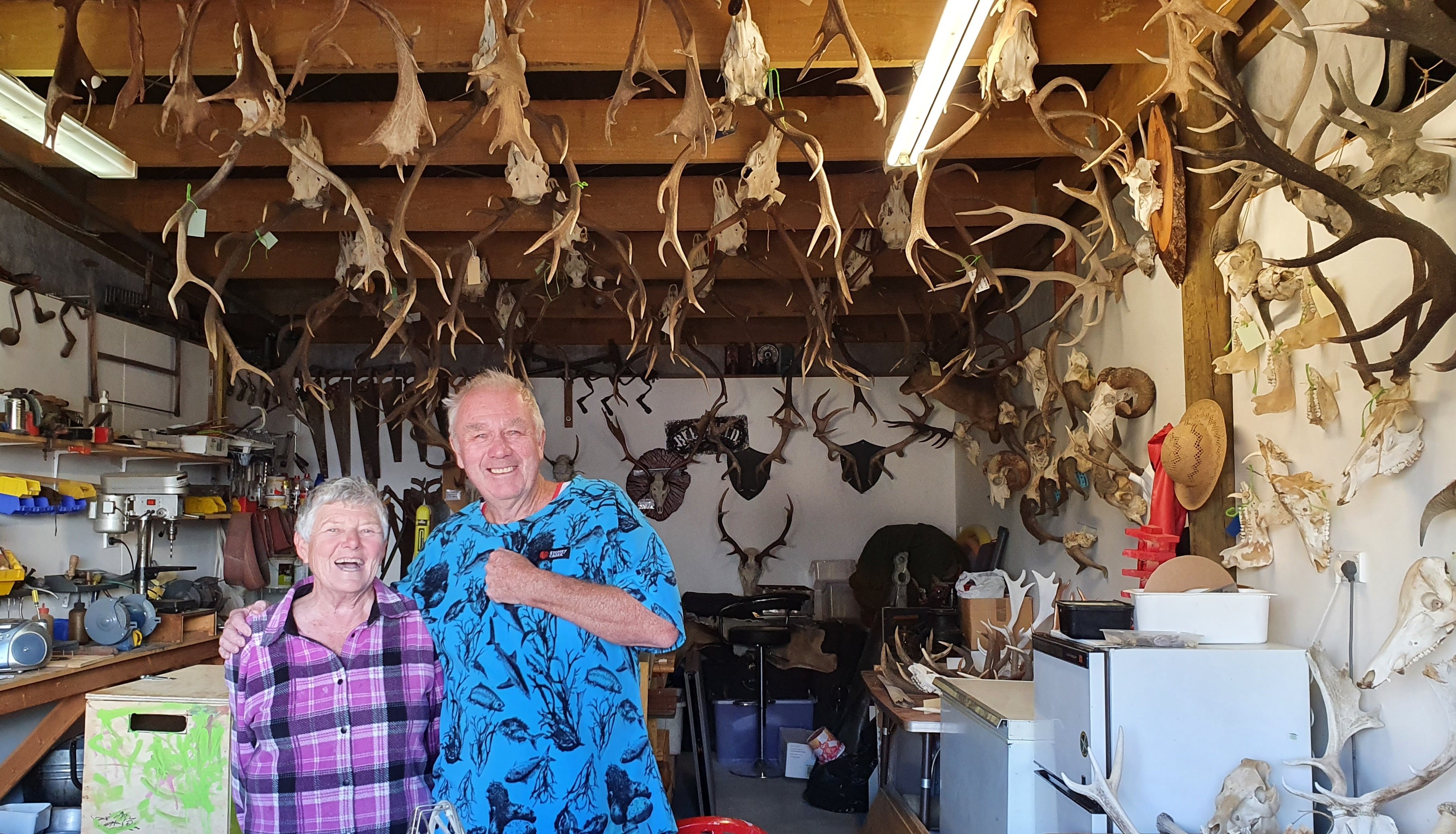 "I don’t like to brag," says Jenny, standing beneath her most recent prize-winning antlers. "I crawled through mud to get that. And carried it out. We leave 30 deer looking for one, take a lot of photographs, and sometimes that’s all we take.

The Douglas Score System, used by the NZ Deerstalkers Association puts emphasis on symmetry, every point must have a contemporary for antlers to be prizewinners.

"There’s no better way of seeing New Zealand, although the hills do get steeper and higher, especially when you’re 73," says Jenny.

Last trip, Malcom took a while to get back to camp. Jenny was that worried, she had the EPIRB out, ready to push the button.

"I waited and waited. There was a deathly silence, you couldn’t even hear a goat. But eventually he popped up, just knackered.

"Our favourite recipe is whatever other people want to make. We give a lot of meat away. It’s the role of the hunter to provide." 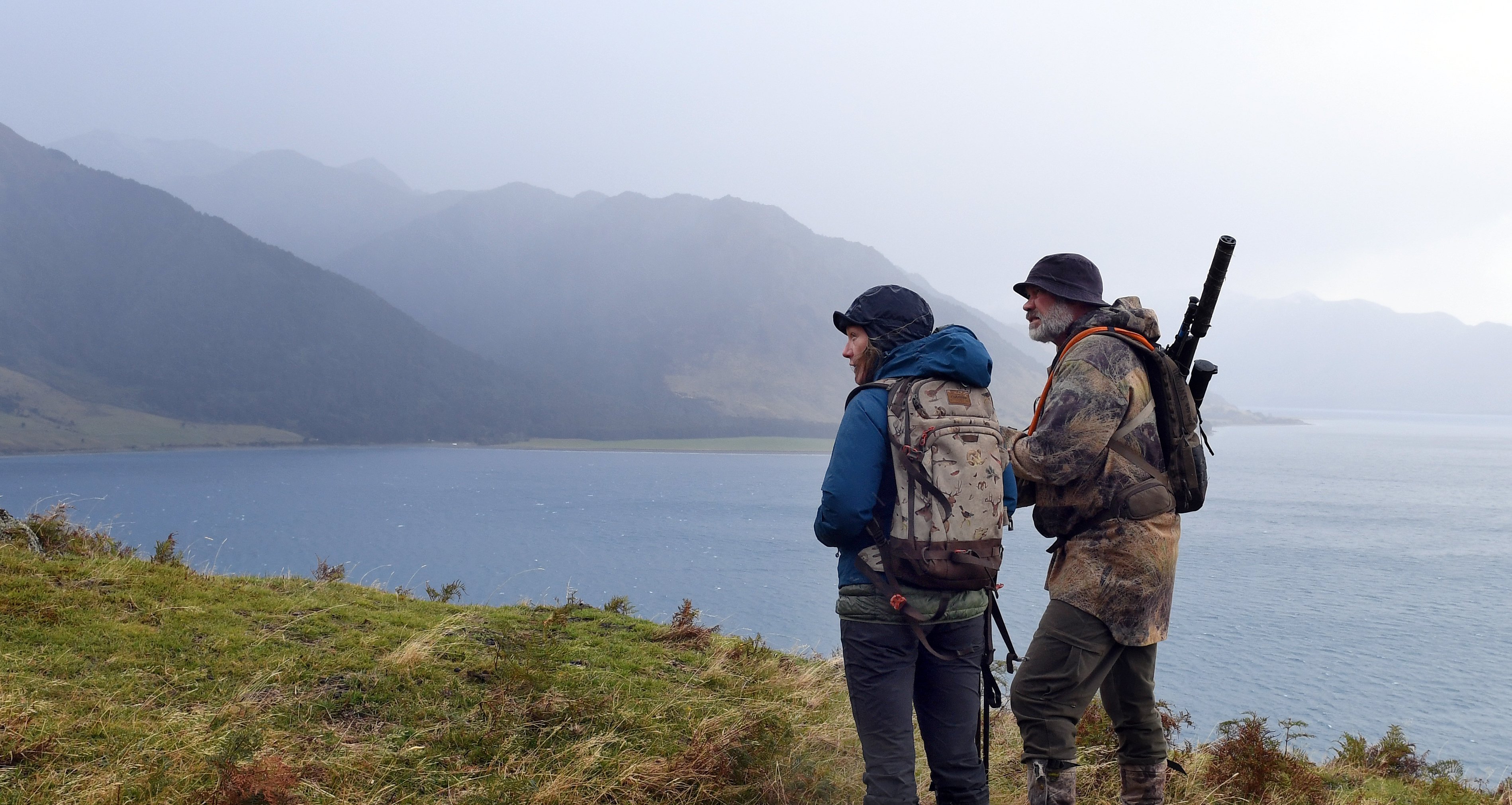 Lisa Scott gets an overview of hunting on Glen Dene Station, Lake Hawea, from guide Tony Higgins. PHOTO: STEPHEN JAQUIERY
Kiwis have been hunting for a while.

"The only thing that’s changed is the gear’s got better, we’re not out there in hobnailed boots and scratchy wool long Johns anymore. Guns have pretty much stayed the same."

Club president John loves the solitude of hunting. Just him and Bella the dog, who still hunts despite her missing foot. She forgets her injury completely when she’s after a wallaby.

"Clear your mind of all the crap, the noise of life. I sleep the soundest when I’m in a tent on the side of a mountain."

When he’s not alone he takes newbies under his wing. People are coming into the sport from a wide variety of backgrounds; and there’s a huge range of different hunting in the Wanaka area, and the nearby Hopkins and Dobson valleys. John’s hoping that with more women becoming members, they might want to take on some of the club’s executive roles and he won’t have to spend four terms as president.

Don’t know about president, but I certainly have an appetite for more.