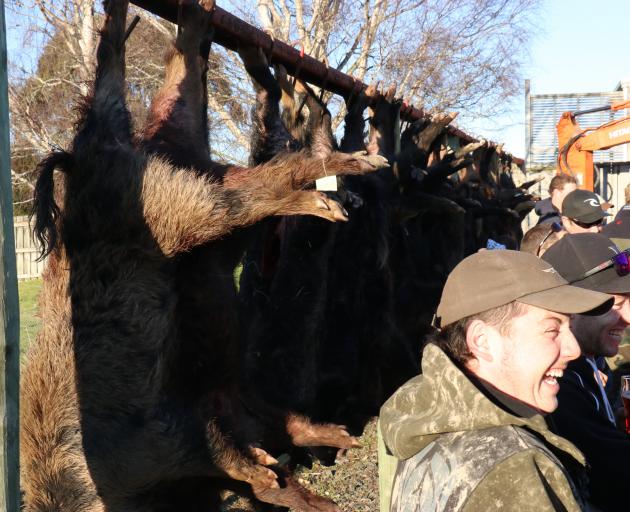 The hunt began on Friday afternoon.

A prizegiving and an auction were held at the Catlins Inn pub, with prizes given out for heaviest pig and correctly guessing the weight of a randomly chosen pig which was suspended on a wall.

But strangely the biggest prize was for the average weight pig, in an effort to draw the biggest number of people to the prizegiving, Catlins Boar Hunt committee member Tash Shute said.

"If you only had a prize for the biggest, a whole bunch of people would decide not to come. This way everyone is in with a shot," she said.

This year, the average weight boar winners were Willy Watson and Toddy King, with a boar weighing 114.8lbs (52kg).

Alongside the adults hunting competition was a "boar carrying" race for children, which involved slinging a dead boar on to the child's shoulders and timing their run around a grass track.

"We wanted to keep it family oriented," said Mrs Shute.

Money raised would go towards the Owaka St John ambulance service and Catlins search and rescue.

At the time of writing the total donation haul had not been tallied yet, but last year each organisation received $2000.

Keeping it family oriented, they sling a dead boar on a child's shoulders, with an 'Away you go, then!' The kids agree with this, presumably.