By Ruby Heyward
3 Comments
Hunting is not just a sport.

It is also a time to have fun with the family and pass on some knowledge.

That was the case at this year’s New Zealand Deer Association North Otago pig hunting competition.

From Friday to Sunday, people from all of North Otago headed out to catch the heaviest boars and deer, while under 14-year-olds hunted rabbits, possums, stoats, wallabies and hares.

New Zealand Deerstalkers Association North Otago president David Hay said there were plenty of professional pig hunting competitions, but going out with family was exactly what the competition was about. 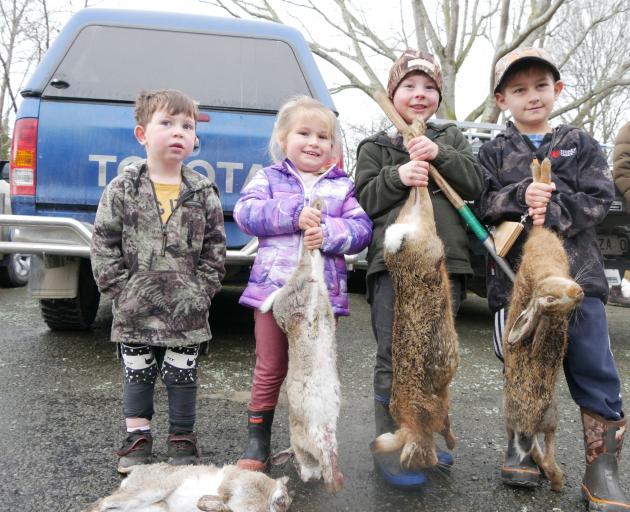 Family friends (from left) Alby Halkett (3), Ella Currie (3), Beau Halkett (5), and Archer Currie (5) enjoyed a morning out hunting together with their dads during this year’s New Zealand Deer Association North Otago pig hunting competition. PHOTO: RUBY HEYWARD
There were 116 entries, many of which were family groups, who often entered year after year, he said.

Of the four entry categories, the under 14-year-olds made up almost a quarter of the competition.

Friends Adam Halkett and Hayden Currie took their oldest children, Alby and Beau Halkett, and Ella and Archer Currie out for the hunt.

Archer particularly enjoyed hunting with his dad, and caught himself an impressively large hare.

It was a good way to get on top of pest levels, while people enjoyed their pastime, Mr Hay said.

Competitors trickled into Purdon’s Cafe and Bar parking lot in Maheno, South of Oamaru, have their game weighed, before the cut off time at 3pm.

“There’s something desperately awful about taking a child out to experience nature by handing them a gun and telling them to kill it. That’s like going to the most beautiful art museum in the world and ripping down canvasses because 'someone will just make another one.' It teaches children that killing is a goal, a healthy way to view another life and socially acceptable." —Kayla Simon -Hunting perpetuates cruelty, teaches violence.

New Zealand continues to have animal welfare issues. We can only hope that as people learn about what's happening in parts of New Zealand, they will work to be sure that this sort of violent education doesn't happen in their own communities. Imprinting kids to kill animals is bad news, can have horrific long-term effects, and should be stopped. - Psychology Today - Marc Bekoff Ph.D.
The Effects of Imprinting Kids to Kill Animals - Horrific killing contests lead to "dead animals, children, and huge smiles."

You happy for rabbits, possums, wallaby etc to decimate the countryside.

This is the best kind of activity for children and for all who can get involved so they can all learn how to live a healthy life.