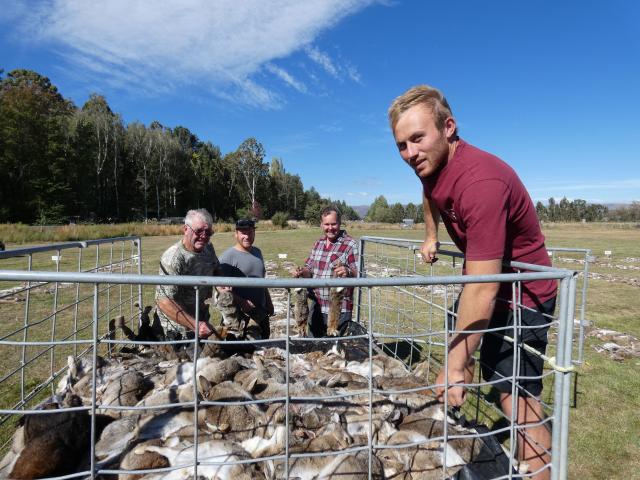 The message could not be any clearer — when it comes to Central Otago and Wanaka’s countryside there is only one bunny welcome at Easter.

A furious southern hunter waiting more than a year for a gun licence is among thousands caught up in a backlog of stalled applications.

The Catlins Boar Hunt returned for its seventh annual outing over the weekend, 84 people entering to hunt the wild beasts in the Clutha wilderness, and the chance to be rewarded for their efforts.

More information is being sought following reports of unlawful duck-shooting activity on the Clutha River near the Roxburgh Gorge Trail during the season's opening weekend.

What makes a country? Is it simply the piece of land and its borders that define it? Is it the accent its people have, or a unique language? Is it what its people like to do, how they act, their...

Southlanders woke to a perfect day for the start of the game bird hunting season on Saturday- perfect for ducks, not the shooters, due to high cloud.

Earnscleugh man Dave Baird is not quite able to shoot ducks from his front porch, although he does not have to go far to do so.

For more than two decades, Laura Douglas has been getting up at the crack of dawn and braving the cold to mark the start of the duck-shooting season.

Hawea-based Stacey Shuker is one of only a handful of qualified female hunting guides in New Zealand. She talks to Sally Rae about life in the hills.

The weather forecast for the opening of duck-shooting season this weekend is good news for the region's game birds.

Four photographs of moose taken by a hunter in Fiordland almost 60 years ago have finally been revealed publicly. Fred Stewardson (78), of Hikurangi, in Northland, took the photographs on a...
The grieving partner of a man shot by his friend during a deer-hunting trip near Rotorua is devastated at the loss of "the love of my life".

Taieri pig hunters are again bringing home the bacon through the resurgence of an annual club event.

Hunter Safety Lab Ltd founder and chief executive Michael Scott is on a mission to eradicate hunting accidents.
Two recent incidents in which hunters have been shot and killed by other hunters have again raised the question of how to make hunting safer. As Mark Price reports, growing numbers of hunters are quietly adopting a contentious safety measure that can be described as very "loud".

The family of the 24-year-old Wanaka man charged this week in relation to the death of his close friend Dougal Fyfe (23) in a hunting accident in December say they are "deeply saddened" by the tragedy.

Among Queenstown's strong hunting community, one Queenstowner is seeking to draw together proponents of a more traditional form of the pursuit - bowhunting.

Hunters, anglers and Kidds Bush campers are being reminded the High Court has ruled Hunter Valley Station, at the northwest end of Lake Hawea, can control the opening and closing of Mead Rd during lambing season, until November 18.